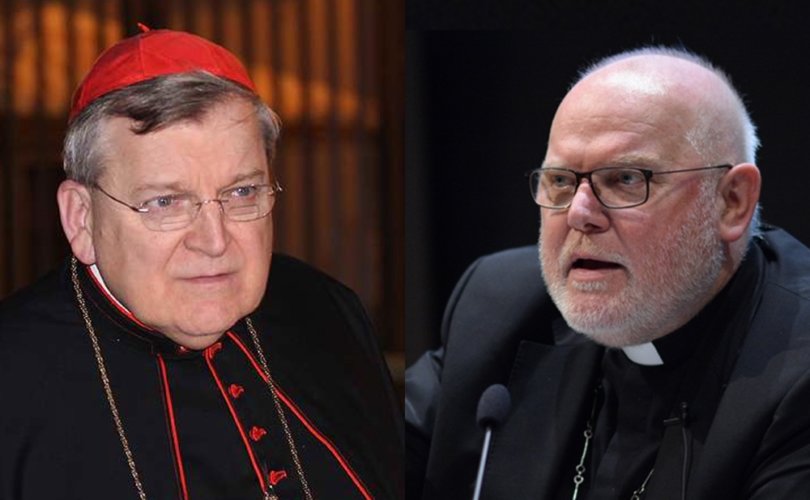 LOUISVILLE, Kentucky, August 9, 2017 (LifeSiteNews) — U.S. Cardinal Raymond Burke has criticized German Cardinal Reinhard Marx for saying that Germany’s recent legalization of homosexual “marriage” is of no major concern for the Catholic Church in that country.

Burke, one of the Church’s leading canon law experts, spoke about Marx as he outlined how evils now commonly accepted in the West’s “ravaged” culture have managed to infiltrate the Church, passing from the shepherds to the sheep. He made the comments at the July 22 “Church Teaches Forum” in Louisville.

“But, in a diabolical way, the confusion and error which has led human culture in the way of death and destruction has also entered into the Church, so that she draws near to the culture without seeming to know her own identity and mission, without seeming to have the clarity and the courage to announce the Gospel of Life and Divine Love to the radically secularized culture,” he said.

He cited as an example the recent remarks from Cardinal Marx, who is the president of the German bishops’ conference.

In a July 14 interview with Augsburger Allgemeine, Marx said he did not see Germany’s June 30 vote that legalized same-sex “marriage” as a defeat for the Church because developing the concept of marriage and the family was not just a church matter but something that belongs as well to the secular state.

“The Christian position is one thing. It’s another thing to ask if I can make all the Christian moral concepts (state) laws,” he said.

Marx then expressed “regret” that the Church “did nothing to oppose homosexuals from being prosecuted” under laws rescinded in 1994 that criminalized homosexual behavior.

Burke said Church leaders must not back away from their duty of giving the world “solid teaching.”

“The world has never needed more the solid teaching and direction which Our Lord, in His immeasurable and unceasing love of man, wishes to give to the world through His Church and especially through her pastors: the Roman Pontiff, the Bishops in communion with the See of Peter, and their principal co-workers, the priests,” he said.

Burke had high words of praise for another German Cardinal, Joachim Meisner. Meisner was one of the four cardinals who, along with Burke, sent Pope Francis the dubia asking for clarity on Amoris Laetitia. Meisner died last month at 83 still awaiting the clarification.

“Having had the privilege to know Cardinal Meisner somewhat well and to work with him in the defense of the Church’s teaching on Holy Matrimony, Holy Communion and the moral law, I know how much he suffered from the ever-increasing confusion about the Church’s teaching within the Church herself,” Burke said.

“Clearly, he had expressed the same concerns to Pope Benedict XVI, concerns which seemingly were mutual, while at the same time he reaffirmed, as our faith teaches us to do, His trust in Our Lord Who has promised to remain with His Mystical Body ‘all days, even to the consummation of the world,’” he added.

Burke said that when he last spoke with Meisner in March in Cologne he was “serene, but, at the same time, he expressed his determination to continue to fight for Christ and for the truths which He teaches us, in an unbroken line, through the Apostolic Tradition.”

Burke called Meisner’s fidelity to his office of shepherd of the flock a “tremendous source of strength for many other shepherds in the Church who are struggling each day to lead the flock in the way of Christ.”

‘Confusion and error’ from Catholic leaders may be sign of end times: Cardinal Burke

Cardinal Burke warns against 'idolatry of the papacy