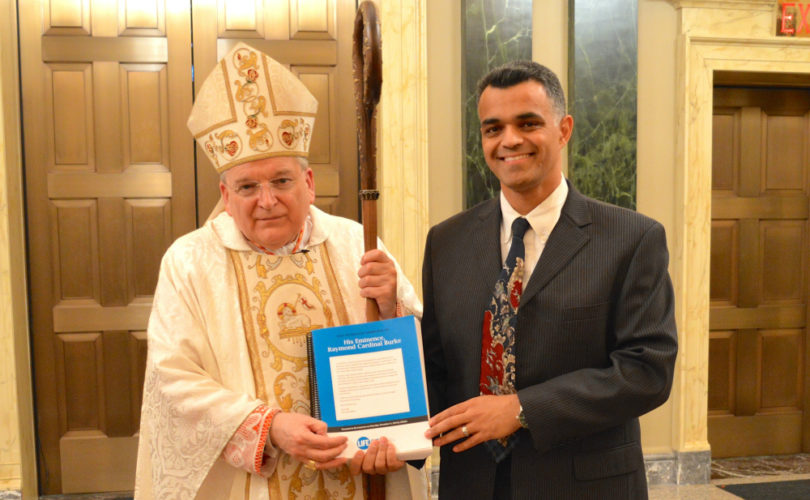 On Thursday, LifeSiteNews presented Cardinal Raymond Burke with a handsomely bound book signed by over 29,000 people who had expressed their thanks for the cardinal’s Vatican service, and pledged to pray for him and to follow his example.

The cardinal expressed his “deepest gratitude” for the show of “support and most of all for your prayers.”

An online petition of support for the Cardinal Burke, one of the most unequivocal pro-life and pro-family voices in the Catholic Church, was launched in November by LifeSiteNews after the Vatican announced that Pope Francis had removed him from his position as the prefect of the Vatican’s Apostolic Signatura. Burke was demoted to the position of patron of the Sovereign Military Order of Malta, a largely ceremonial role.

“We must all now, going forward, remain united in our Lord Jesus, defending the truth of our faith, especially with regard to marriage and the family,” said Burke after being presented the pledges by LifeSiteNews editor-in-chief John-Henry Westen. The exchange took place at the Shrine of Our Lady of Guadalupe in La Crosse, Wisconsin on Thursday.

“We can be confident, even though things can seem rather dark to us, that if we cooperate with God’s grace, and are true defenders of the faith and promoters of the truth about marriage and the family, that Our Lord will not be lacking in his grace for us.”

“Of course, the victory is always his in the end. Let’s remain steadfast and not give way to discouragement,” the cardinal said.

By signing the petition, signatories expressed their “personal gratitude” for Cardinal Burke’s “faithful service these past years” and for being a “strong and uncompromising voice in defense of the truths of life and the family.”

“Though I, and countless fellow Catholics and pro-life and pro-family advocates, will miss your voice and presence at the Vatican, I know that a transfer of position will do nothing to dissuade you from courageously proclaiming the truths of the Gospel of Life,” the petition states.

“I offer you my heartfelt prayers and well wishes as you go through this period of transition. May God bless you.”

Burke told LifeSiteNews that those who defend real marriage between a man and woman must be willing to lay down their life for the truth, like Christ.

“We must look to Our Lord himself who had to suffer and die for the sake of the truth and so too we have to be ready to accept whatever suffering comes our way in defending the truth of our faith, especially the very sacred truth with regard to God’s plan for man and woman in marriage from the very beginning,” he said.

“God bless you all, and thank you once again with all my heart,” he added.

Cardinal Burke: Church teaching on sexuality must be clarified, and only Pope Francis can do it

Demotion, or freedom? Friends of Cardinal Burke hopeful transfer will amplify his voice