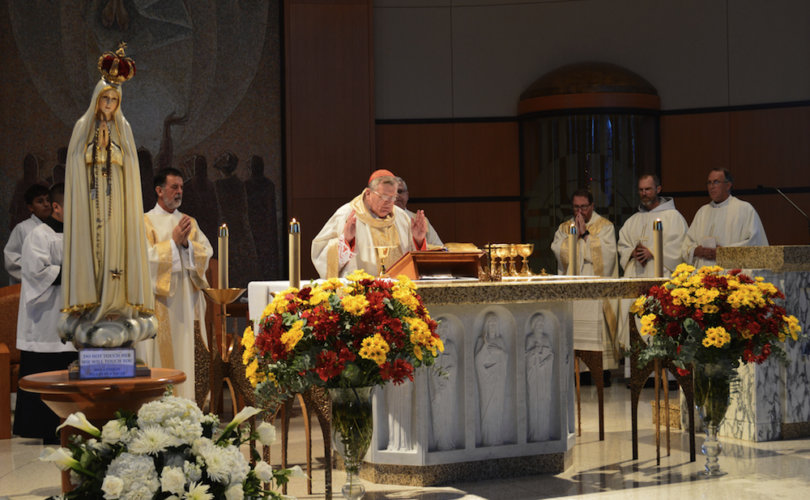 IRVING, Texas, October 9, 2017 (LifeSiteNews) — “It is evident that the consecration (of Russia) was not carried out in the manner requested by Our Lady,” said Vatican Cardinal Raymond Burke in his keynote address marking the highlight and conclusion of the Fatima Centennial Summit held over the weekend.

“I do not doubt for a moment the intention of Pope St. John Paul II to carry out the consecration on March 25, 1984,” said Cardinal Burke. He noted that Sister Lucia stated that “Our Lady had accepted it.”

He continued nonetheless, “Recognizing the necessity of a total conversion from atheistic materialism and communism to Christ, the call of Our Lady of Fatima to consecrate Russia to Her Immaculate Heart in accord with Her explicit instruction remains urgent.”

The former head of the Vatican’s highest court reissued his call, first made at the Rome Life Forum in May, for the faithful to pray and work for the consecration of Russia according to Our Lady’s specific instruction. He quoted the end of the famous secret to the children where Our Lady Herself predicted: “In the end, my Immaculate Heart will triumph. The Holy Father will consecrate Russia to me, and she shall be converted, and a period of peace will be granted to the world.”

With some 700 attendees, the conference was the largest Fatima centennial celebration in North America. To a standing ovation both before and after he spoke, Cardinal Burke delved deeply into the message of Our Lady of Fatima, her predictions and the consequences of failing to heed her warnings to the world.

The Cardinal drew a direct line from the famous Third Secret of Fatima’s dire predictions for the massacre of priests, religious and the death of the Pope to the current crisis in the Church.

“The teaching of the Faith in its integrity and with courage is the heart of the office of the Church’s pastors: the Roman Pontiff, the Bishops in communion with the See of Peter, and their principal co-workers, the priests,” he said. “For that reason, the Third Secret is directed, with particular force, to those who exercise the pastoral office in the Church. Their failure to teach the faith, in fidelity to the Church’s constant teaching and practice, whether through a superficial, confused or even worldly approach, and their silence endangers mortally, in the deepest spiritual sense, the very souls for whom they have been consecrated to care spiritually.”

Cardinal Burke, who has suffered publicly for his defense of the faith, urged the faithful, “Let us not fail to embrace whatever suffering comes from our faithful witness to Him Who is the true Treasure of our hearts.”

“Let us not give way to discouragement but rather remember that the Immaculate Heart of the Blessed Virgin Mary assumed into glory, never ceases to beat with love for us, the children Her Divine Son gave to Her as He was dying on the cross,” he said.

The Cardinal concluded quoting the words of Pope St. John Paul II, who in 1982 during his consecration of the world to the Immaculate Heart noted: “Mary’s appeal is not for just once. Her appeal must be taken up by generation after generation, in accordance with the ever new ‘signs of the times.’ It must be unceasingly returned to. It must ever be taken up anew.”

Organized by Catholic Action, videos from the conference will in time be made available on its website.