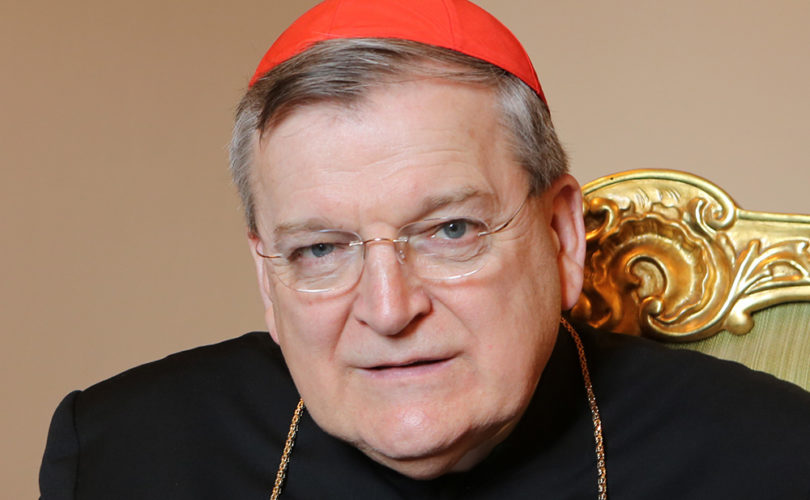 May 14, 2021 (LifeSiteNews) — Cardinal Raymond Burke said that while schism among Catholics in Germany has not yet been officially declared, it nevertheless is “real” in practice.

“In my view, there is now a schism that is real if not declared. It is a schism in practice, if it can be called that,” Burke told Argentinian Fr. Javier Olivera Rabasi in a May 2 interview that was conducted in Spanish. Burke’s comments were translated by Martin Barillas for a Church Militant report.

“This is very serious, especially for faithful Catholics who want to be faithful to Christ and his Church,” continued Burke, who is regarded as one of the world’s foremost canon lawyers and who was formerly the prefect of the Apostolic Signatura, the Church’s highest court.

“These German bishops have not been disciplined. The situation continues, and it is difficult to see how the situation can be reconciled. We must pray to the Lord for our Church while testifying to the truth found in the Church,” he added.

Burke adds his voice to many other cardinals and bishops who are alarmed to see that the Germany bishops’ “Synodal Path” process is showing signs that it will result in a departure of the Catholic church in Germany from the One, Holy, Catholic, and Apostolic Church. The Synodal Path has been promoting positions that are contrary to Catholic teaching on the male-only priesthood, marriage, and sexuality, among other things. Germany clergy earlier this week demonstrated open dissent to Church teaching by offering public blessings to homosexual couples in more than a hundred locations.

Last week, Hong Kong Cardinal Joseph Zen joined with two bishops and a dozen priests in appealing to Pope Francis to intervene to stop the Catholic church in Germany from going into “schism.”

“The German Synodal Path, initiated in 2019, has been, during the past two years, fertile ground for the planning and subsequent homogenization of ideas and theories that are blatantly contrary to the immutable and perennial Magisterium of the Holy Catholic Church, founded by the Divine Savior on the solid rock of the Apostles,” the appeal states.

“Concerned about this sad situation, we Pastors of the Catholic Church and faithful laity committed to the defense of the Truth of the Faith, ask the Holy Father to take the necessary measures to put an end to these drifts of the German Synodal Path and, if necessary, to apply the appropriate canonical sanctions against the promoters of this tremendous deviation from both doctrine and communion with the Keys of Peter,” the appeal added.

Cardinal Rainer Woelki, the archbishop of Cologne, warned in 2019 that the Synodal Path could lead to “schism within the Church in Germany” to the point of it becoming a “German national church.”