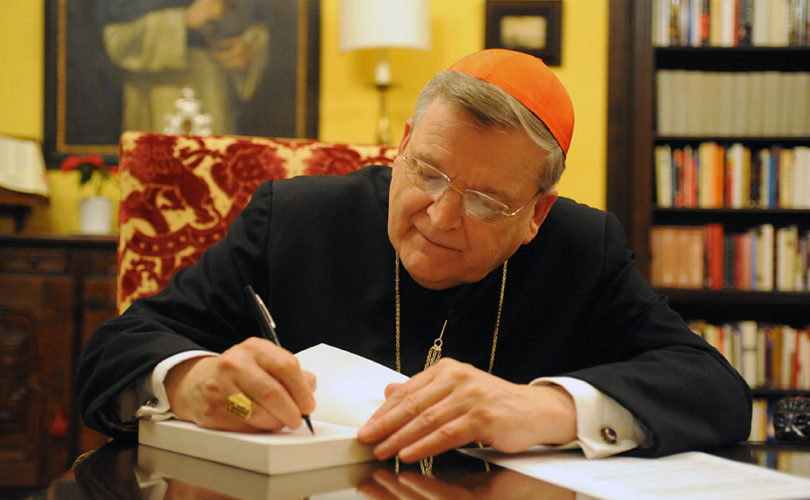 December 3, 2015 (LifeSiteNews) — It is impossible for the recently concluded Synod on the Family to have opened a door to allowing Holy Communion to Catholics who have been civilly divorced and remarried because such a door “does not exist and cannot exist” within the Catholic Church, wrote Cardinal Raymond Burke, patron of the Sovereign Military Order of Malta, in a December 1 article appearing in National Catholic Register.

Cardinal Burke took issue with a November article by papal friend and adviser Father Antonio Spadaro, S.J., editor of La Civiltà Cattolica, who declared that the Synod had opened the door for the “remarried” divorcees to have access to Holy Communion.

“Concerning access to the sacraments for those divorced and remarried civilly, the synod has formulated the way of discernment and of the ‘internal forum,’ laying the foundations and opening a door which, on the contrary, had remained closed in the preceding synod,” Spadaro, a strong advocate of the Cardinal Kasper proposal and close friend and advisor of Pope Francis, wrote at that time.

Burke criticized Spadaro’s position, saying that the “lack of clarity” in the problematic paragraphs 84-86 of the Synod’s Final Report dealing with the Holy Eucharist and Holy Matrimony have now “emerged in the public declarations of the synod fathers.”

“The fact is that the synod could not open a door which does not exist and cannot exist, namely, a discernment in conscience which contradicts the truth about the supreme sanctity of the Most Holy Eucharist and the indissolubility of the marriage bond.”

“The synod, as the Church has always taught and practiced, has wanted to show love towards the individual who finds himself in a situation which is not coherent with the teaching of Christ and his Church,” Cardinal Burke wrote.

Cardinal Burke said that “Christlike love” of individuals living in irregular unions is not Spadaro’s “integration and reconciliation without barriers,” but it is rather “accompan[ying] the individual on the way to repentance and reparation, so that he can once again be disposed to meet Christ in the sacraments.”

“To give the impression that there is another practice in the ‘internal forum,’ which would permit an individual in an irregular union to have access to the sacraments, is to suggest that the conscience can be in conflict with the truth of the faith. Such a suggestion clearly places priests in an impossible situation, the expectation that they can ‘open a door’ for the penitent, which, in fact, does not exist and cannot exist,” he wrote.

“Ultimately and to the most serious harm of the universal Church, it creates the expectation that the Roman pontiff can sanction a practice which is in conflict with the truths of the faith. The Synod of Bishops, in accord with its nature and purpose, cannot be the instrument of such an expectation,” he concluded.

Earlier in October, Cardinal Burke raised serious concerns about the Synod’s Final Report, calling it misleading and lacking clarity on crucial Church teaching. He criticized the Synod’s proposal that civilly divorced and remarried Catholic be “more integrated” as “theologically ambiguous.”

Bishop Schneider: The Synod’s final report compromises with the ‘culture of divorce’