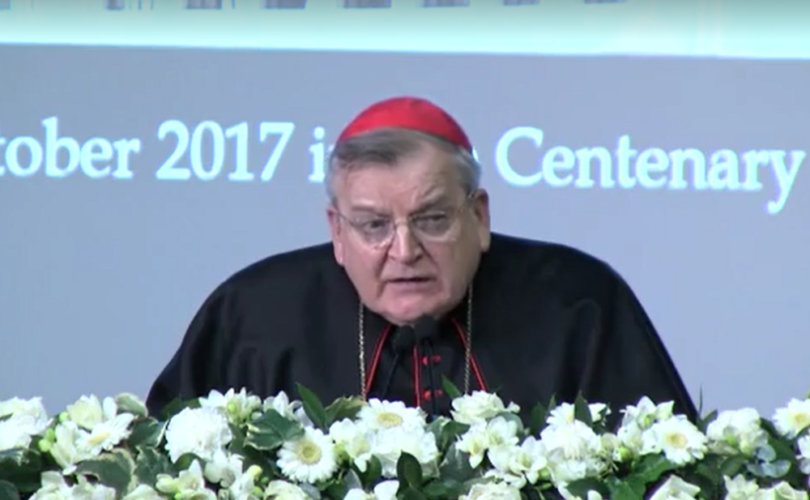 DEVON, England, October 13, 2017 (LifeSiteNews) — The crisis in the world 100 years ago when Our Lady appeared at Fatima continues today and has also infected the life of the Church, Cardinal Raymond Burke said yesterday.

Addressing a Fatima conference in England coinciding with the 100th anniversary of the final apparition, Cardinal Burke said the faithful should be realistic about the great evils besetting the world and the Church, but be full of hope in the victory of the Sacred Heart of Jesus through the Immaculate Heart of Mary

“The reality of the apostasy of faith in our time rightly and profoundly frightens us,” he stated. “Our love of Christ and of His mystical Body the Church makes clear to us the gravity of the evil which seeks to rob us of our eternal salvation in Christ.”

“But let us not give way to discouragement,” he said. “But rather remember that the Immaculate Heart of the Blessed Virgin Mary assumed into glory never ceases to beat with love for us, the children whom her divine son gave to her as he was He was dying upon the cross.”

One of the four cardinals who submitted the dubia asking Pope Francis for moral clarity on Amoris Laetitia, Cardinal Burke gave the keynote address for the conference Fatima 100 years Later – A Marian Call for the Whole Church held at Buckfast Abbey.

His talk drew parallels between the rampant confusion and “drawing back” from the faith today in the Church with times past.

We are called to sacrifice

The cardinal patron for the Knights of Malta called for Catholics to be prepared — with the help of the Virgin Mother of God — to accept whatever sacrifice is asked of them in order to be faithful soldiers of Christ. This means taking up the way of prayer, penance, and reparation as taught by Our Lady of Fatima.

Drawing heavily on the wisdom and writings of Pope Saint John Paul II, along with other  Church fathers, Cardinal Burke discussed apostasy from the faith, the “poisonous fruits of the failure of the Church’s pastors,” the nature of the third secret of Fatima, and also the urgent need to consecrate Russia to Our Lady’s immaculate heart as she requested.

He explained at the conference that apostasy is defined as the abandonment of the faith.

“The fundamental nature of apostasy is the drawing away from a divine grace, which first had been given by God and received by man,” said Cardinal Burke. “Since apostasy is committed by a man who has received the gift of faith, has known God and His divine law, it is sin against religion, an act of injustice before God.”

Apostasy can be either explicit or implicit in nature, the cardinal explained.

This expressed the inseparable unity of faith and virtue, said Cardinal Burke

“Faith in God necessarily expresses itself in love of God,” he said.

Apostasy is distinguished from heresy, he said, which is the other grave sin against the faith. Where apostasy is the total defection from the Catholic faith, heresy is the denial of one or another article of the faith. Heresy, depending upon the manner in which it is embraced, can lead to apostasy.

Pope Saint Pius X and his 1903 encyclical E Supremi come to mind, said Cardinal Burke, when considering how the Church has and continues to suffer from “the persistent heretical doctrines of Modernism.”

In the document, Pius discussed “the disastrous state of human society” at the time, calling apostasy from God a “terrible and deep-rooted malady” dragging society to destruction.

“How much more than ever today does the Roman pontiff face the daunting challenge of a widespread apostasy from God from the faith?” Cardinal Burke posed for those in attendance.

“How much more ever than today movements for a single government of the world — and certain movements even in the Church — violate the moral law and lack any foundation in God’s plan for us,” he said.

The cardinal referenced Pius X’s encyclical Pascendi Domonici Gregis to show how the heretical doctrines of Modernism flow from “a rationalism and sentimentalism, which draws souls away from the faith itself,” and that “the partisans of error” were found in and outside the Church, within the laity and the priesthood.

Cardinal Burke lamented that “the undiscerning members of the faithful can be deceived and beguiled by appearances, attractive theater and flashy slogans, under which the substance is poison for their souls.”

“St Pius X showed then how a divorce of faith from reason, which is inherent to a rationalist and sentimentalist approach, leads man away from God,” he said. “Pope Pius X courageously identified a poisonous way of thinking, which had been plaguing the Church for some centuries, and which continues to plague the Church in our time.”

The cardinal spoke of how apostasy is a form of “spiritual suicide” and according to Le dictionnaire de théologie catholique: “This spiritual suicide is after the hatred of God, the most grave of sins, for it most completely and definitively separates the powers of the human soul, intelligence and will from God.”

“It is clear that apostasy, either explicit or implicit, leads hearts away from the Immaculate Heart of Mary,” said Cardinal Burke, “and thus from the Sacred Heart of Jesus — the only font of our salvation.”

“In that regard, as the message of Fatima makes clear, that the pastors of the Church who in some way cooperate with apostasy, also by their silence, bear a most heavy burden of responsibility.”

The cardinal acknowledged differences over whether the third secret had been fully revealed, opting not to take the matter on in his talk.

But he said, “It seems clear from the most respected studies of the apparitions of Our Lady of Fatima that it has to do with the diabolical forces unleashed upon the world in our time and entering into the very life of the Church, which leads souls away from the truth of the faith and therefore from the divine love flowing from glorious pierced heart of Jesus.”

The third secret of Fatima is not about nuclear war or the end of the world, he said, according to former Leiria-Fatima Bishop Alberto Cosme do Amaral, who in 1984 said the secret rather concerns the Catholic faith itself, specifically its decline in Europe.

It’s clear that only the faith can save man from the spiritual chastisements which rebellion against God brings, he said, and clergy carry a particular responsibility in this regard.

“The teaching of the faith in its integrity and with courage is the heart of the office of the Church’s pastors; the Roman pontiff, the bishops in communion with the See of Peter and their principle coworkers the priests,” continued Cardinal Burke. “For that reason, the third secret is directed with particular force to those who exercise the pastoral office in their church.’

He said further, “Their failure to teach the faith in fidelity to the Church’s constant doctrine and practice, whether through explicit declarations and actions, or through a superficial, confused or even worldly approach, or through their silence, endangers mortally in the deepest spiritual sense the very souls for whom they have been consecrated to care spiritually.”

Describing the widespread effect of this failure to uphold the faith, he said, “The poisonous fruits of the failure of the Church’s pastors are seen in the manner of worship, of teaching and of moral discipline which is not in accord with divine law.”

The grave evil of apostasy has been continually addressed and sanctions applied throughout the Church’s history, he shared, including Pope Saint John Paul having addressed apostasy in our time on a number of occasions.

The cardinal said Pope John Paul’s appeal for a new evangelization was in response to a constant spread of an abandonment of the faith and practice, and the pope made this appeal to evangelization by pointing out how much philosophical positions inimical to the faith and its practice were influencing the very life of the Church.

Pope John Paul II’s noted “culture of death” reference also stemmed from his analysis of apostasy, he pointed out.

“We think in our time of the practical apostasy of Catholics who support and promote programs and laws which are contrary to the moral law or who are silent and inactive about them,” Cardinal Burke said. “We think about the evermore diffuse confusion and error in the Church about the foundations of the faith, about the holy Eucharist and holy Matrimony and about the holy Scriptures. And of the moral life, about acts which are always and everywhere evil, and about the just punishment of sin, including eternal damnation for the soul which remains unrepentant of grievous sin.”

Of late, however, this can occur with impunity.

“And all of this in many places not only goes uncorrected by the clear announcement of the Church’s constant teaching and practice, but is condoned and even promoted by those charged by our Lord with the care of souls,” Cardinal Burke told the conference. “We are not talking about theoretical questions, but about a confusion and error which endangers the salvation of souls.”

The Church is needed more than ever

At a time when the world has never needed more the clear and courageous witness of the Church, he continued, she appears not to know herself.

The messages of both Pope John Paul and Our Lady remain pertinent now, he said.

Our Lady teaches that the peace of God will come through two means, the cardinal said: the consecration of Russia to the Immaculate Heart of Mary, and the practice of the communion of reparation on the first Saturday of the month.

Regarding the consecration of Russia, he said he doesn’t doubt it was Pope St. John Paul’s intention to carry out the consecration in 1984, and he said Sister Lucia had indicated that Our Lady accepted it.

“But it is evident that the consecration was not carried out in the manner requested by Our Lady,” said Cardinal Burke. “Recognizing the necessity of a total conversion from atheistic materialism and Communism to Christ, the call of Our Lady of Fatima to consecrate Russia to her immaculate heart in accord with her explicit instruction remains urgent.”

Our Lady wins in the end, but we must act

“We have the assurance of Our Lady that her immaculate heart will triumph,” he added, “that the truth and love of her divine Son will triumph, and we are called to be agents of her triumph by our obedience to her maternal counsel.”

Sister Lucia’s description of the third secret included the angel at Our Lady’s side, pointing to the earth and repeatedly crying out for “Penance!”

She also described the martyrdom of those who remain true to the Lord.

To this Cardinal Burke said, “Let us not fail to embrace whatever suffering comes from our faithful witness to Him who is the true treasure of our hearts.”