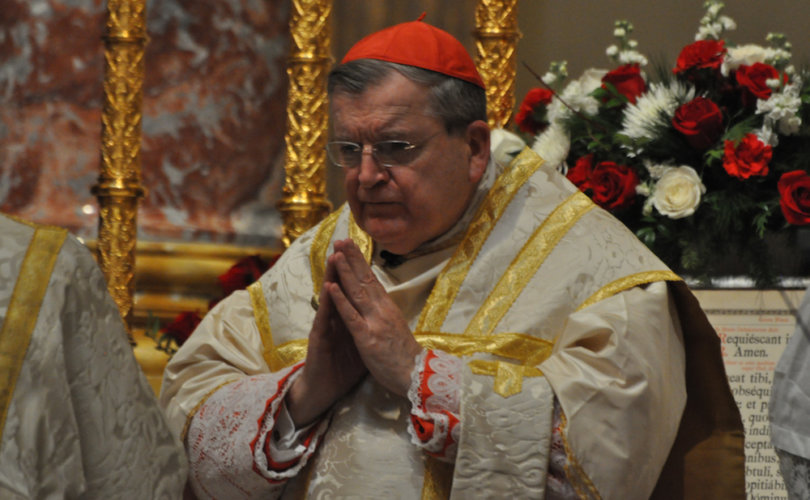 PHILADELPHIA, Pennsylvania, April 4, 2018 (LifeSiteNews) – Cardinal Raymond Burke will speak about the nature of marriage at a conference in Philadelphia on April 21.

The dubia cardinal will be joined by Father Gerald Murray of The World Over fame and Father Dennis Gill, rector of the Cathedral Basilica of Saints Peter and Paul. The conference will take place in that cathedral and will include a Marian procession and crowning, Eucharistic Adoration, and a recitation of the rosary.

Called Matrimony: Rediscovering Its Truth, the conference is being organized by The St. John Neumann Chapter and Catholics United for the Faith.

“The stability of indissoluble marriage is threatened by the cultural and legal developments over the last 50 years that have had a profound impact on Catholics,” Murray told LifeSiteNews. “Marriage is not well understood by many Catholics, who either get married outside the Church, or who do not have a full and proper understanding indissolubility when marrying in the Church.”

Marriage is “so fundamental in maintaining a sound moral culture,” one of the organizers, Anne Wilson, told LifeSiteNews. People in every state of life will benefit from this conference, she said, whether they’re priests, single lay people, married, divorced, or widowed.

“This conference will discuss all the current cultural challenges to matrimony and will have question and answer periods after each speaker finishes their talk,” said Wilson. “Catholics should rediscover the meaning of marriage now because we are bound to follow the timeless teaching of the Church, which has always condemned homosexual behavior. It is hoped that this issue, which has been presented only as a civil rights issue, can be seen as a moral issue which is important and which requires the exercise of chastity, self-control, and virtue.”

Murray predicted that clarification of the prevalent confusion in the Church over marriage, adultery, and Holy Communion will “no doubt … be in the air at this conference.”

“Cardinal Burke has set forth the Church’s perennial teaching on this matter on many occasions,” he said. “I have tried to do the same.”

Additionally, Murray told LifeSiteNews, the conference will outline why Catholics should rediscover the meaning of marriage now, even though same-sex “marriage” has already been imposed on the U.S.

“So-called same-sex marriage introduces the notion that marriage and procreation are not intrinsically related,” he explained. If relationships “based on engaging in unnatural non-procreative sexual activity can be called marriage, then marriage is no more than a way to engage in whatever sexual activity one chooses with no necessary relation to the true, God-given nature and purpose of marriage.”

“The Catholic Church must be conscious that her teaching will be obscured in people’s minds by this new legal order imposed by the U.S. Supreme Court, and by the cultural movement to legitimize sexual perversions, and stigmatize anyone who rejects such a cultural and legal revolution,” said Murray.

Wilson said the organizers hope that young people attending “go away enlightened about the sublime nature of matrimony and the wisdom of the Church in retaining its teachings about it through the centuries. We also hope those young people will try to educate and help form others in the proper way to view matrimony.”

Cardinal Burke is one of the most well-known, beloved defenders of the pro-life cause and Catholic orthodoxy. The American cardinal was previously the Prefect of the Apostolic Signatura, essentially the Church’s supreme court.

He joined three other cardinals in writing a dubia, or formal request, to Pope Francis asking whether Amoris Laetitia is aligned with Catholic morality. The pontiff has yet to respond. Since then, two of the dubia signers, Cardinals Joachim Meisner and Carlo Caffara, have died.

In a recent interview with the Thinking with the Church podcast, Cardinal Burke said the Catholic Church is being attacked “at her very foundation.”

He expressed his “anguish” at the suggestion he would lead a schism and said that speaking the truth about marriage is done in service, not opposition, to the pope.

“What frightens me a great deal about the present situation of the Church is what I would call a politicization of Church life and of Church doctrine,” he said. “This is easily done by the secular media, but it is also being aided and abetted in the present time by certain Church leaders and theologians and other commentators. This is not a question of being in favor of the ‘Francis Revolution,’ as it is popularly called. It is not a question of being ‘pro-’ Pope Francis or ‘contra-’ Pope Francis. It is a question of defending the Catholic faith, and that means defending the Office of Peter to which the Pope has succeeded.”

“To defend what the Church has constantly taught and practiced can never be seen as some kind of political action against the ‘other’ political movement, as it is called – the ‘Revolution’ in the Church – and can never be seen as being contrary to the Papal office. In fact, the greatest service that any one of us can give to the Holy Father is to speak the truth of the faith, and this then assists him in being what the Second Vatican Council rightly calls the principle of the unity of all the bishops and of the Church itself,” said Cardinal Burke.

The registration deadline for Matrimony: Rediscovering Its Truth is April 16. After that, the organizers will still accept registrants, but lunch will not be available to them.

Attending the conference costs $50. It is $20 for full-time students and free for priests, religious, and seminarians.

Participants can register for the conference here.