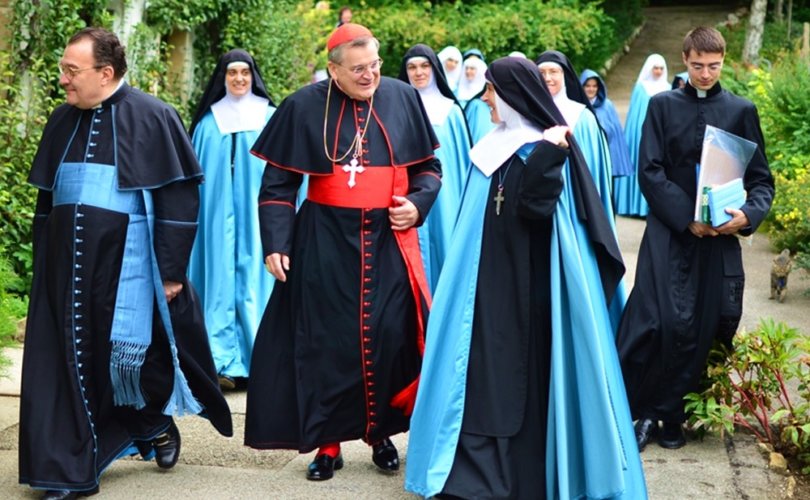 PARRAMATTA, Australia, September 22, 2017 (LifeSiteNews) – Two of the four dubia Cardinals seeking moral clarity from Pope Francis over his controversial teachings on marriage and family have died. But this will not stop the remaining two cardinals from continuing the “important work of resolving the dubia,” said Cardinal Raymond Burke, one of the dubia signers, in a new interview.

In a wide-ranging interview with the Diocese of Parramatta’s Catholic Outlook, Burke said the “urgency of a response to the dubia derives from the harm done to souls by the confusion and error, which result, as long as the fundamental questions raised are not answered in accord with the constant teaching and practice of the Church.”

This urgency “weighs very heavily on my heart,” he said.

Confusion about Amoris Laetitia has led to people “feeling that the Church is not a secure point of reference,” said Burke.

“There isn’t clarity about these matters,” he said. “These people are in a very difficult state. It’s demonstrable, it’s a fact that we have conferences of Bishops which are contradicting one another with regard to Amoris Laetitia, Bishops contradicting one another; we have lay faithful who argue with one another over this; and so many priests are suffering in particular because the faithful come to them, expecting certain things that are not possible because they’ve received one of these erroneous interpretations of Amoris Laetitia. As a result, they don’t understand the Church’s teaching anymore.”

“You know that in the Church, we have only one guide, the Magisterium, the teaching of the Church, but we now seem to be divided into so-called political camps,” explained Burke. “Also, even the language that’s used is very mundane and that concerns me a great deal.”

Burke, one of the Church’s staunchest defenders of Catholic orthodoxy, said the Church can offer “direction” and lead to cultural transformation “in terms of respect for human life and respect for the integrity of the family and respect for religious freedom.”

He also expressed his grief over the loss of two of the four dubia signers, Cardinals Joachim Meisner and Carlo Caffarra. Of the four, only he and Cardinal Walter Brandmüller remain.

He said Caffarra “suffered profoundly” because “confusion and error in the Church has led to the grave harm of souls.”

“Over the years, I was blessed by the friendship of Cardinal Carlo Caffarra, an outstanding priest and highly regarded scholar on the theology of marriage and family life,” said Burke. “During the past three years, I have worked very closely with him in defending marriage and family life from a growing confusion and even error, which have also entered into the Church.”

“In every encounter with Cardinal Caffarra, I was impressed with his purity of heart and with his totally priestly character,” continued Burke. “He loved Christ and His Mystical Body, the Church, with all his heart. For that reason, he suffered profoundly from the fact that the present situation of confusion and error in the Church has led to the grave harm of souls.”

But Caffarra “never questioned Our Lord’s presence with us, according to His promise to the disciples, and he never questioned the maternal intercession of the Virgin Mother of Our Lord.”

“While we are sad to have lost the earthly collaboration of these two great pastors and prelates, we are certain that they will continue to assist us with their prayers inspired by their enduring pastoral charity,” said Burke.

Liberals in the Church ‘make personal attacks’ while clamoring for ‘dialogue’

Burke explained that the media often misrepresents him and tries to portray him as fundamentally in opposition to the Pope.

“They depict Pope Francis as a wonderful, open person and there’s nothing wrong with that, but they depict me as just the opposite,” said Burke. “I believe that anyone who has had any experience with me as a priest or Bishop would say that I am very pastoral and in fact, I don’t see any contradiction between being pastoral and being faithful in announcing the Church’s teaching and following the Church’s law.”

“They’re making a caricature of someone who’s asking for clarity about certain matters, they’re saying ‘well, he’s the enemy of the Pope’ and he’s trying to build up opposition to the Pope, which of course isn’t the case at all,” said Burke.

Burke decried the trend of progressives in the Church personally attacking anyone who disagrees with them while pretending that they support “dialogue.”

“The thing that I find rather consistently is that so-called liberal people, the people who call for revolution in the Church and so forth are liberal and want dialogue as long as you agree with them,” said Burke. “The minute you raise a question, they become very dismissive, make personal attacks, what we call ad hominem arguments, and so forth. That really isn’t helpful. We’re talking about truths, we’re talking about facts and there’s no place for these kinds of attacks.”

“It’s a very mundane way of approaching things, it has no place in the Church, but that’s where we’re at right now,” he said. “People even making disparaging commentaries on other people, when they don’t agree with them.”

“Well, my point is this: ‘What is it that I’ve said that isn’t true?’ And I’ll address it,” the cardinal continued. “If you simply accuse me of being ‘out of tune’, ‘out of touch’, or whatever, ‘medieval’, or deluded, there’s no response to that.”

Burke said he prays for cardinals and others in the Church who attack him.

“They are Cardinals of the Church” and in “positions of tremendous responsibility,” he said. “Also I have a certain fraternity with them as members of the same College, the College of Cardinals, so that goes without saying” that I pray for them.

Hope in Our Lord

Burke encouraged Catholics to never give up hope “no matter what confusion or even divisions enter into the Church.”

“We should cling all the more faithfully to what the Church has always taught and practiced,” the cardinal said. “And that way we will really save our own souls, with the help of God’s grace, which, of course, we must always be about.”

“Our Lord always remains with us in the Church,” he continued. “He is our chief priest and guide, and therefore we should have confidence in leading a Christian life. We should have hope in Him.”