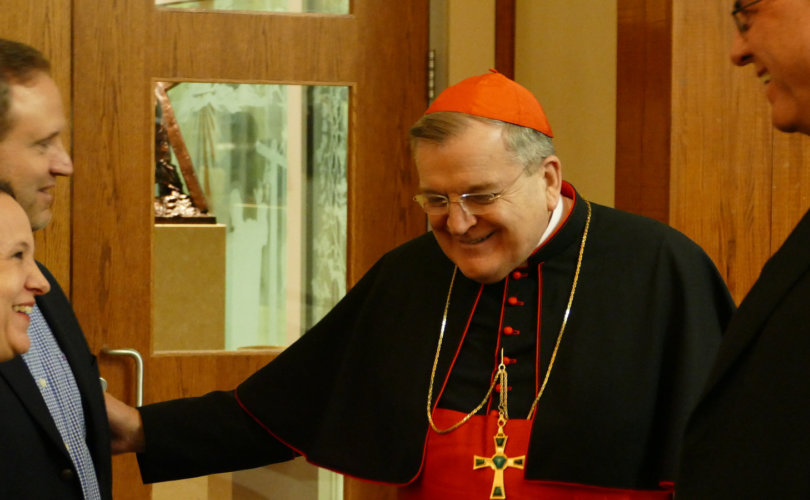 LENEXA, Kansas, February 17, 2017 (LifeSiteNews) – The façade of Cardinal Raymond Burke as a boogeyman of tradition projected by his critics and the media was nowhere to be found last Friday when he gave his usual clear witness to the Catholic faith before an overflow crowd in the Kansas City area.

Cardinal Burke delivered a stirring, clear message on defending the Catholic faith amid the current confusion in the Church that was embraced with resounding gratitude by more than 1,500 who flocked to St. James Catholic Academy.

A faith leader in demand

Cardinal Burke’s appearance for the Kansas City Knights of Malta was largely unpublicized in the midst of the tempest in Church hierarchy. Yet it took off on social media in the weeks leading up to the event, resulting in the extraordinarily high turnout, and thousands watching on Facebook Live.

“It really had a life of its own,” said Dr. Paul Camarata, who is with the Kansas City Knights of Malta.

“We were thrilled with the response of the faithful to the event,” Camarata said, “with over 1,500 in attendance Friday night and 4,500 watching online and with almost 10,000 views of the video total since on Facebook.”

Camarata headed the Knights’ committee overseeing the chapter’s Defense of the Faith Lecture. He told LifeSiteNews that preparations began almost a year ago, but once word got out that Cardinal Burke was coming, interest escalated exponentially, all in a matter of a few weeks.

Cardinal Burke’s visit to give the lecture for the local Knights of Malta coincided with his celebrating the White Mass for the Kansas City Catholic Medical Association (CMA) and numerous other appearances over several days.

Camarata, who is also a member of the local CMA, had a hand in getting the cardinal to and from the various local events, and he said it was an amazing time for him personally.

“The outpouring of support was really amazing,” Camarata told LifeSiteNews. “To see how many people love him and support what he’s doing for the Church.”

Camarata told LifeSiteNews that Knights and Dames in other regions of the order were incredibly impressed with the event and Cardinal Burke, and Camarata has received numerous messages from them about it.

“When we mentioned to local Knights and Dames the thought of inviting His Eminence, they were thrilled and excited to host him,” he said. “In fact, we have received notices in advance, with virtually no marketing, from Knights, Dames, and other interested faithful that were coming from many neighboring states including Iowa, Nebraska, Arkansas, and Oklahoma, in addition to, of course, Kansas and Missouri.”

President of the Knights of Malta Federal Association, U.S.A. Margaret Melady and executive director Deacon Michael Stankewicz were in attendance for the lecture, as was the local ordinary Kansas City, Kansas, Archbishop Joseph Naumann.

“I even received an email from a Knight in Germany who found out about the event!” exclaimed Camarata. “There were Knights from Minnesota and Pennsylvania who expressed their wishes to be able to attend.”

Our faith is in God

The cardinal took questions after his talk. In response to one, he said that despite the tremendous confusion in society and the Church, our faith must not be shaken and must remain fixed on Christ.

“Our faith does not depend on one person or another person,” Cardinal Burke said. “We pray that those who are clergy and our fellow Catholics are strong and witnesses to Christ, but people fail. But that doesn’t destroy our faith.”

Asked what he would say to a convert who feels betrayed that what is written in the Catechism does not at times seem to be the belief system of clergy and laity today, the cardinal told those in attendance that Catholics have the testimony to the faith from the Catechism and the discipline of the Church in the Code of Canon Law.

“There is no question we’re living through a time in which there is a tremendous amount of confusion, not only in society, but also within the Church itself,” he responded, saying he often encounters frustrated individuals who are beginning to question their Catholic faith.

This could be particularly difficult for those who have come into the Catholic Church, the cardinal said, because they saw in the Church fidelity to the truth of Christ handed down through the apostolic tradition. And his response is always that our faith does not depend on any one person. Although there’s a great temptation to be discouraged because of the erroneous or confused statements by clergy or fellow Catholics, Cardinal Burke reminded the crowd that St. Paul encountered this in the first preaching of the faith.

“You always have people who think they know better than the Church, or who want to use the Church for some other purpose,” he said.

“St. Paul was very strong. Even if an angel from heaven announced to you something different from what I’ve taught you or what you’ve been taught in the Church (he said), 'Anathema sit.' In other words, the angel is an anathema, is excommunicated.”

“So that’s what we have to keep in mind,” Cardinal Burke continued. “Our faith is in our Lord Jesus Christ, who’s alive in the living Tradition of the Church. “And He safeguards that through the apostolic tradition. We find that expressed in the Catechism and the Code of Canon Law for the discipline of the Church.”

Educating in the faith and forming conscience

Asked in the Q&A whether an erroneous conscience leads to salvation, Cardinal Burke responded, “No in fact, it can’t. It leads in fact to just the opposite.”

And this is, as he had also pointed out in his lecture, why it’s so important for Catholics to educate their children and young people, and to educate themselves.

If our consciences are not well formed according to the truth of Christ, he said, there is the danger so prevalent today of conscience being abstracted from objective truth.

Regarding voting for a pro-choice or a pro-abortion candidate, Cardinal Burke said Catholics need to look for is the candidate who is sound on fundamental issues.

“Human life, the family, religious freedom, freedom of education,” he said. “Those are the fundamental issues. But the first has to be the safeguarding and protection of human life itself.”

“We tend to abstract politics from our Christian faith, and that is really lethal,” the cardinal continued. “Politics has to be informed — and as the Holy Father (Pope Benedict) said, purified and elevated — by our Christian faith. And that means also in the way we vote.”

This response and other answers to questions garnered fervent applause in addition to a lengthy standing ovation at the end of the presentation.

Cardinal Burke’s lecture in the Kansas City area came just before the former head of the Church’s highest court was sent to Guam to preside over a Church trial investigating sexual abuse charges against Agana Archbishop Anthony Apuron.

It also follows weeks of turmoil within the highest levels of the Sovereign Military Order of the Knights of Malta and the Vatican, before Cardinal Burke being effectively sidelined as the cardinal patron of the order by Pope Francis.

The pope’s appointment of a special delegate to the Knights of Malta is seen as rejoinder to the dubia submitted by Cardinal Burke and three other cardinals last November seeking clarification on the pope’s Amoris Laetitia document.

Amoris Laetitia has created widespread confusion on whether the Church has abandoned its teaching on marriage and opened the door to those living in non-marital unions to receive Communion. The pope has remained silent on the issue.

Cardinal Burke referenced the Catechism, the Second Vatican Ecumenical Council and teachings from Popes Benedict XVI, Saint John Paul II and Paul VI in addressing the crisis of Christian culture, reason and faith related to objective moral principles. The cardinal also talked about holiness in a totally secularized world and the new evangelization, and holiness related to witnessing to the truth on human sexuality. And he spoke about “the critical service” of parents as primary educators of their children.

Response from the faithful

A number of Catholics present for the Defense of the Faith Lecture shared their reaction with LifeSiteNews.

“I liked it,” said Jacob Villotti, of Garden City, Missouri, roughly 60 miles southeast of Lenexa. “His witness is unwavering, his fidelity to the faith, and the traditions of the Church.”

Murphy Obershaw, a senior at St. James Academy, said she thought the talk was good, especially the cardinal’s emphasis on prayer in daily life.

“It gave me something to think about” making more time for prayer, Obershaw told LifeSiteNews. “I thought that it was a good thing that he has this whole prayer campaign going on. I need to pray more often.”

Jeremiah Martell, 19, of nearby Bonner Springs, Kansas, said, “He basically told us stuff I already knew, and just put it in a more concrete way.”

“It was very impressive,” stated Jeanette Inglin, 19, of DeSoto, Kansas, 15 miles west. “It gives us courage to go on, knowing that Cardinal Burke defends the faith. He’s just very admirable. I liked it a lot.”

Joe Meyers, 16, of Bucyrus, Kansas, said that even though he came with his parents, “I would have come anyway. I knew he was a pretty solid cardinal.”

Camarata summed up the impact of the event.

“It will be hard to match the success of this event, which is just a testimony to how eager the Catholic faithful are to hear how to best live out our faith,” he said.

The entire lecture can be found here.