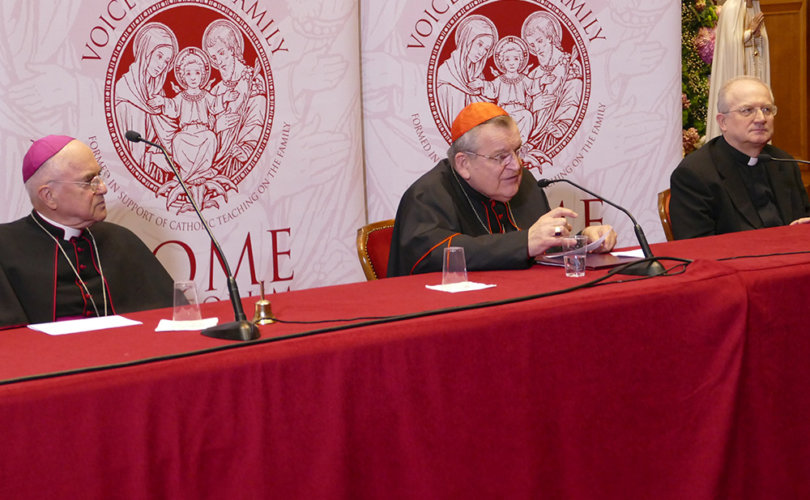 Cardinal Burke responding to questions at Rome Life Forum 2018. To his left is Archbishop Vigano and to his right is Mgr Livio MedinaSteve Jalsevac/LifeSite

ROME, May 18, 2018 (LifeSiteNews) – There is a risk that the upcoming synod on youth will bring “more difficulties” for the Church, Cardinal Raymond Burke said at the Rome Life Forum today, noting there have already been allegations of manipulation.

“What can we expect about and after the new synod in October?” he was asked. “A new storm in the Church? A new ambiguous exhortation? More dubia?”

“I think simply from a point of human reason, and also from the point of view of Christian morality, if those who organized the synod in 2014 and 2015 have not had a conversion of heart, I think we can expect more difficulties,” the cardinal responded bluntly. “I see already – and I read it also from some young people who have been engaged in the process – their perception that the synod is being manipulated to drive forward [a] certain agenda.”

The preliminary synod documents “can rightly and correctly within the Church be subjected to critical examination,” said Cardinal Burke, urging Catholics “to be very attentive to each step as [it] goes forward.”

Those who are involved with the synod and “are thinking rightly and judging correctly situations” should be encouraged to speak up and “to make their voice heard,” he said. “They will have to do it perhaps outside of the structure of the synod itself, which can be quite controlling.”

When the youth synod was first announced, Catholic observers were leery of its intent. This was because of the apparent manipulations of the recent Extraordinary and Ordinary Synods on the Family that advocated for changes in the Catholic Church’s teachings on human sexuality, marriage, and the family.  In an interview in October, Cardinal Kevin Farrell, appointed by Pope Francis to head the Vatican's life and family dicastery, did not allay such concerns, saying that the Youth synod will help the Church “change its ways of doing things.”

A working document for the upcoming Synod released in March that was allegedly drafted by young people called Catholic teaching on “contraception, abortion, homosexuality, cohabitation” “especially controversial.” The young people stated that they “they may want the Church to change her teaching.”

Burke commented on the input of young people in the synod process.

“One general remark is that [regarding] all of these supposed ‘surveys’ taken on the Internet, which came up with very different results, some young people are claiming that they wrote in asking for more frequent access to the sacred liturgy according to the usus antiquior, the Extraordinary Form of the Roman Rite, and on the other hand, we hear reports that the young people are saying that the Church has…to change completely its language that simply doesn’t correspond to the ‘reality of today,’” Cardinal Burke observed.

The cardinal said such reports about changing the Church’s language should be “very strongly questioned.”

“The synod of bishops exists to help the Roman Pontiff to teach more effectively the Catholic faith and to apply its discipline,” he explained. “It does not exist to create new teachings or to create new disciplines. This is, in my judgement…an abuse of an institution in the Church that has to be stopped.”

The cardinal’s remarks on the youth synod are during the last nine minutes of the below video.