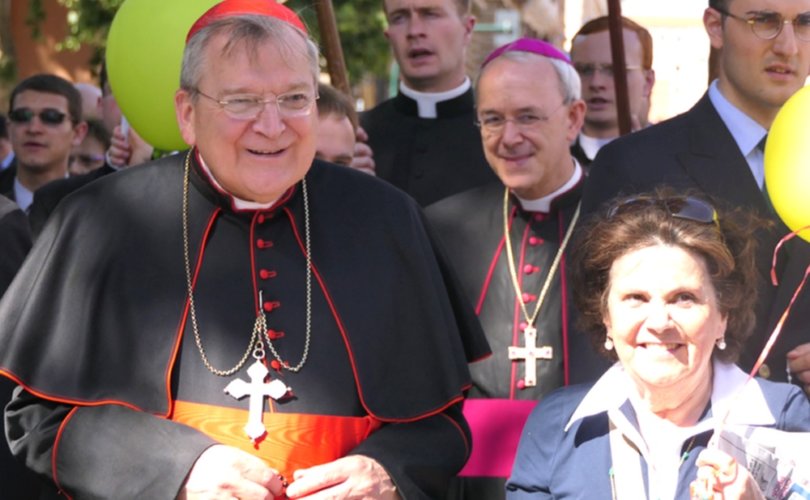 LOUISVILLE, Kentucky, August 9, 2017 (LifeSiteNews) — To treat every word uttered by the Pope as if it were official Church teaching would be to fall into an “idolatry of the papacy,” said Cardinal Raymond Burke in a recent address at a Catholic conference in Kentucky.

The Cardinal, who spoke at the July 22 “Church Teaches Forum” in Louisville, said that Catholics seeking to remain true to Christ and the Church he founded must learn to discern between the “words of the man who is Pope and the words of the Pope as Vicar of Christ on earth.”

“Pope Francis has chosen to speak often in his first body, the body of the man who is Pope. In fact, even in documents which, in the past, have represented more solemn teaching, he states clearly that he is not offering magisterial teaching but his own thinking,” the Cardinal said.

“But those who are accustomed to a different manner of Papal speaking want to make his every statement somehow part of the Magisterium. To do so is contrary to reason and to what the Church has always understood,” he continued.

“It is simply wrong and harmful to the Church to receive every declaration of the Holy Father as an expression of papal teaching or magisterium,” he added.

READ: ‘Confusion and error’ from Catholic leaders may be sign of end times: Cardinal Burke

The Catholic Church holds that a pope teaches infallibly when “in virtue of his office…he proclaims by a definitive act a doctrine pertaining to faith or morals.” The Church also holds that when the pope in the “exercise of the ordinary Magisterium” proposes a teaching that “leads to better understanding of Revelation in matters of faith and morals” the faithful “are to adhere to it with religious assent.” These teachings are found in the Catechism of the Catholic Church.

Burke has previously called the Pope’s controversial 2016 Amoris Laetitia “not an act of the magisterium” but a “personal reflection of the Pope.” The Apostolic Exhortation has been interpreted by various bishops and cardinals as allowing civilly-divorced-and-remarried Catholics living in adultery to receive Holy Communion. Such an interpretation contradicts previous Catholic teaching.

Burke called it “absurd” for anyone to think that Pope Francis as Vicar of Christ on earth could officially “teach something which is not in accord with what his predecessors, for example Pope Benedict XVI and Pope Saint John Paul II, have solemnly taught.”

The Cardinal said that making the distinction between “words of the man who is Pope and the words of the Pope as Vicar of Christ on earth” is crucial for showing “ultimate respect” for the Petrine Office while staying true to the perennial teachings of the Catholic faith.

“Without the distinction, we would easily lose respect for the Papacy or be led to think that, if we do not agree with the personal opinions of the man who is Roman Pontiff, then we must break communion with the Church,” he said.

Burke said that Catholics must be diligent not to be led astray by false teaching.

“The faithful are not free to follow theological opinions which contradict the doctrine contained in the Holy Scriptures and Sacred Tradition, and confirmed by the ordinary Magisterium, even if these opinions are finding a wide hearing in the Church and are not being corrected by the Church’s pastors as the pastors are obliged to do,” he said.