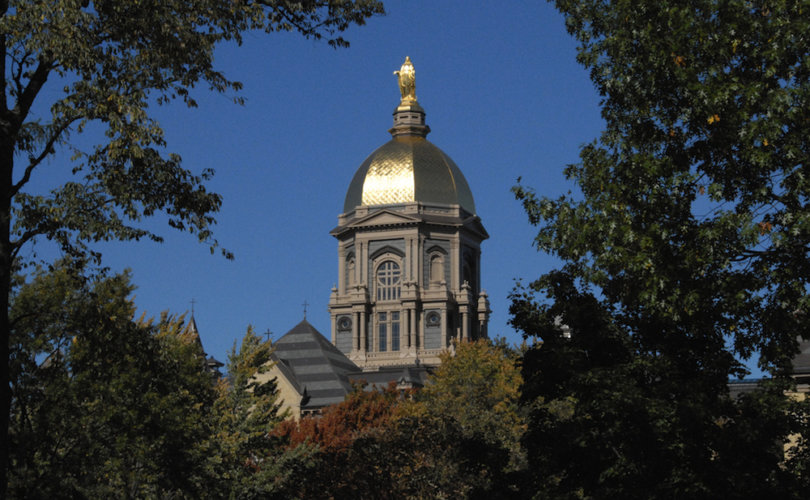 “We rejoiced when Notre Dame united with us in our expression of deep concern that the federal government was intruding on the realm of conscience,” the USCCB pro-life chief said in a recent Wall Street Journal article. “Thank God Notre Dame was with us.”

But the archbishop of New York and chair of the USCCB’s Committee on Pro-Life Activities went on to say that “we cannot understand’’ why the university, having taken up the legal case, is now saying, “‘It wasn’t all that important to us, anyway. We’re going to allow it, anyway.’ That does baffle us.”

Notre Dame reversed its decision to discontinue providing birth control coverage earlier this month even though the Trump administration had rolled back the Obamacare Mandate for employers objecting on religious or moral ground to being compelled to provide birth control.

Birth control is against the Catholic Church’s teaching because it separates the unitive and procreative components of the marital act.

Further, chemical contraception has countless associated health risks, and despite the myriad medical dangers it has become prevalent in the culture, accepted as actual health care by many, including a significant percentage of Catholics.

Abortifacient birth control falls under the Obamacare Contraception Mandate as well, making the Mandate especially nefarious for observant Catholics and other pro-life Christians.

“‘Baffle’ is the right word for Notre Dame doing precisely what it told the courts it could not do in good conscience and without giving scandal, particularly to its students,” William Dempsey told LifeSiteNews. “Notre Dame pursued a pretend lawsuit and misled both church leaders and courts.”

Sycamore Trust had said in a bulletin that by going along with birth control provision in its health plans in this manner the university’s administration set the precedent for surgical abortion, sterilization, and anything else that has a significant support in the university community to be covered.

“It is a dark time for Notre Dame,” the group said.

The WSJ report of Cardinal Dolan’s comments from earlier this month comes amid another apparent reversal by Notre Dame in areas pertinent to Catholic principles.

The university seemingly withdrew a decision last week to begin allowing abortion expenses to qualify for reimbursement under flexible spending accounts (FSAs) in its healthcare coverage.

The Notre Dame website had previously said IRS guidelines would determine what qualifies for reimbursement in university coverage as of January 1, 2018, and those guidelines include abortion, sterilization and prescription contraceptives.

Both LifeSiteNews and Sycamore Trust inquired with university officials about whether Notre Dame intended to allow abortion expenses to be reimbursed in its FSAs.

A university spokesman told LifeSiteNews, “Abortion is not and will not be an allowable expense in the medical flexible spending accounts available to Notre Dame employees.” The wording on the university website was later amended to include the phrase “except for abortion services, which will be excluded” in regard to qualified medical expenses.

The university did not respond to a follow-up inquiry from LifeSite as to whether it would allow reimbursement for other procedures, devices and drugs in conflict with Catholic teaching as dictated by the IRS guidelines.

Sycamore Trust was critical when the university initially opted to let abortion charges be reimbursed in its health plans.

“While of course the partial reversal is welcome,” the group said in a statement, “this remains another episode bewildering in its ham-handed management and, in combination with the university’s sanctioning the free provision of abortifacients and contraceptives to students and employees, deeply depressing for the indifference it shows to the sacredness of human life and the teachings of the Catholic Church.”