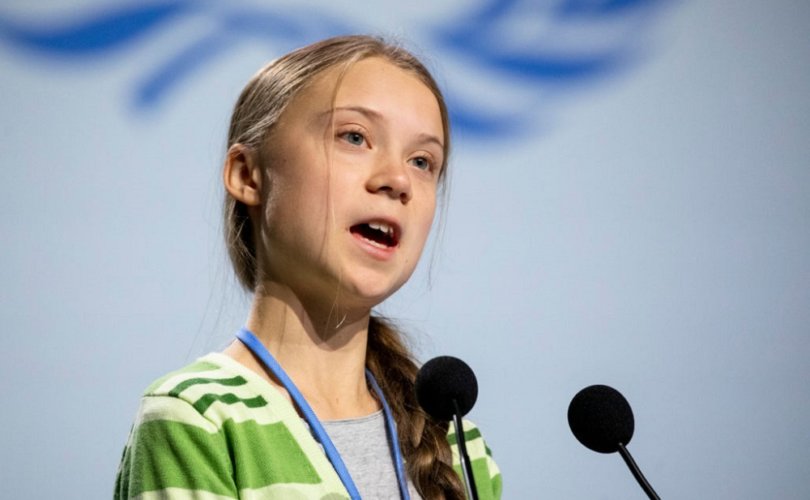 Cardinal Peter Turkson, 71, told reporters yesterday that Thunberg is “a great witness to what the Church teaches on the care of the environment and the care of the person.”

“What is her objective? Skipping school for a future, a future that can’t be guaranteed because there is no care for the environment,” he continued.

Turkson is the prefect of the Vatican Office for Integral Human Development, a dicastery created by Pope Francis in 2017 to take responsibility for “issues regarding migrants, those in need, the sick, the excluded and marginalized, the imprisoned and the unemployed, as well as victims of armed conflict, natural disasters, and all forms of slavery and torture.” He was speaking to reporters on the occasion of the release of Pope Francis’s message for the 2020 World Day of Peace.

According to Crux, Turkson said there is no coherence between international policies on the environment and what children are told. While not going so far as to say Thunberg is a model of the “ecological conversion” Pope Francis calls for in his message, the cardinal said she had brought attention to the Church’s belief that “attention to the poor and society also coincide[s] with care for the environment, the common home.”

On Wednesday, Swedish Greta Thunberg was named Time Magazine’s “Person of the Year” for 2019. Aged 16, she is the youngest person ever to be given the title by the American periodical. Thunberg shares the annual honor with such personages as aviation pioneer Charles Lindbergh (1927), Mohandas Gandhi (1930), Adolf Hitler (1938), and Joseph Stalin (1939, 1942).

Thunberg came to prominence for her environmental activism soon after she began sitting outside the Swedish parliament on school days holding a sign reading “Skolstrejk för klimatet [School strike for the climate].” Her goal was to shame the Swedish government into complying with the Paris Agreement on reducing greenhouse gas emissions. Thunberg posted a photo of herself “striking” that went viral on social media, and her cause was publicized by the founder of a social media company who was also concerned about climate change.

Thunberg’s example led to children “striking” from school on Fridays, first in Sweden and then all over the world. She began appearing at climate demonstrations around Europe and then, famously traveling by yacht, in New York City, where she gave an impassioned speech at the U.N. Climate Action Summit. Today the teen activist marked “Week 69” of her school strike on Twitter.

Pope Francis, whose environmental concerns were showcased in his 2015 encyclical Laudato Si’, appears to be one of Thunberg’s admirers. In April 2019, the pontiff greeted Thunberg as she stood in the VIP section for the Wednesday papal audience in St. Peter’s Square and told her to continue her activism.

In August, Pope Francis told Italian media he was conscious of environmental awareness, “particularly in the movements of young ecologists, like that of Greta Thunberg, ‘Fridays for [the] future.’”

“I saw one of their signs that really struck me,” the pontiff added. “‘We are the future!’”

Critics have suggested that Thunberg, who has autism, is a pawn of left-wing activists who are willing to terrify children with exaggerated claims of environmental disaster in order to bring about a new world order.

In August, Thunberg tweeted a photograph of herself celebrating LGBT Pride Day, saying she was supporting “Stockholm Pride” from Copenhagen.