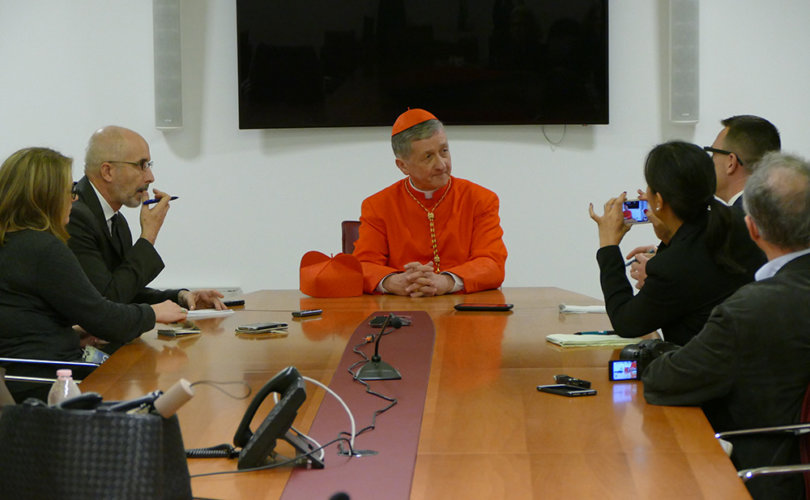 Editor's Note: John-Henry Westen and Steve Jalsevac are reporting direct from Rome during the consistory.

ROME, November 20, 2016 (LifeSiteNews) – Sayings which have made Pope Francis the darling of the liberal media are the condemnations against Catholics whom he pejoratively refers to as “obsessed,” “doctors of the law,” “neo-pelagian,” “self-absorbed,” “restorationist,” “fundamentalist,” “rigid,” “ideological,” “hypocritical,” and much more. So many are the insults felt most by Catholics who hold firm to the teachings of Pope St. John Paul II on life and family that only a couple of years into his pontificate a compilation called “The Pope Francis Little Book of Insults” was developed.

Nevertheless, newly elevated Chicago Cardinal Blase Cupich says, he’s never heard anything harsh from the Pope. At a press scrum at the North American College, Cardinal Cupich was asked by LifeSiteNews co-founder Steve Jalsevac about the animosity felt by those Catholics who loved and held to the teachings of Pope St. John Paul II – animosity coming even from the Pope in response to critics of Amoris Laetitia. Cupich responded, “I’ve not seen that to be honest with you.”

Cupich cited the Pope’s November 17 interview with the Italian newspaper Avenire in which the Pope makes comments about his Cardinal critics, but didn’t see those comments as being  as being harsh. However, most Catholic Vatican reporters have seen that same article very differently. Vatican expert John Allen writes at Crux that the Pope responded by accusing his critics of “psychological and spiritual dysfunction rather than in a real, honest-to-God set of theological or pastoral convictions.” Over at Religion News Service, David Gibson saw Francis in the Avvenire interview as “firing back at foes of his efforts to make the Catholic church more open and pastoral in its ministry.”

A read of the clips of the interview show an arguably harsh take on the four Cardinals and other critics of Amoris Laetitia who have clearly taken pains to be respectful in their questioning of Francis. Still, the pope’s response is being seen by many to display a considerable animosity towards his critics, with Vatican reporter Ed Pentin reporting (at 27:39) that sources have told him the pope is “boiling with rage” over the recent letter from the cardinals  (see video below starting at 27:39).

Crux presented the key quotes from Francis in this way:

Francis says in the interview that some criticisms of Amoris reflect “a certain legalism,” and a lack of understanding that discernment must come in the flux of life. Later, in talking about accusations that his ecumenical initiatives risk “selling out” Catholic doctrine, Francis thoroughly unleashes his inner Sigmund Freud.

“As far as opinions, you always have to distinguish the spirit with which they’re voiced,” he said. “Where there’s not a nasty spirit, they can help you on the path. Other times, you see quickly that criticisms taken here and there to justify pre-existing positions aren’t honest, they’re formed with a nasty spirit in order to sow division.”

“You also see quickly that certain rigorisms are born from something missing, from trying to hide one’s own sad dissatisfaction behind a kind of armor,” the pope said.

Still later, Francis warns that the “cancer of the Church” is a pursuit of glory rooted in “the logic of ambition and power.”

For Cupich however, in the Avvenire interview the Pope simply said “some people want things black and white” and, said the new Cardinal, “I don’t think that’s harsh.” Cupich added, “I have never heard anything from the Holy Father that suggests to me that he is being harsh in the addressing of this question.”

Speaking to the College of Cardinals during the St. Peter's Basilica consistory adding Cupich and another 16 to their number, Pope Francis warned against the “the virus of polarization and animosity” noting that even the Cardinals “are not immune” from it and must guard against such attitudes finding “a place in our hearts.” See full text of talk here.

Is Vatican, under Pope Francis, moving away from teachings of John Paul II on life and marriage?