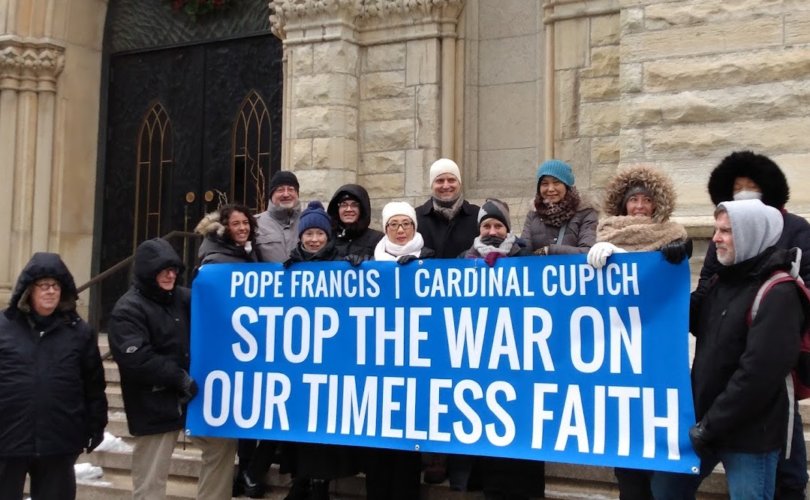 Protesters convened in front of Chicago’s Holy Name Cathedral for a Rosary rally, organized by the Coalition for Canceled Priests, demanding an end to the cardinal’s crackdown on the traditional liturgy. Demonstrators held a banner addressed to Cupich and Pope Francis that read: “Stop the war on our timeless Faith.”

The rally is part of a new campaign launched by the coalition, the Lepanto Institute, and Regina Magazine titled “Save the Latin Mass.”

Two weeks ago, Cupich announced some of the most severe restrictions on the TLM in the United States, banning the old Mass on Christmas, Easter Sunday, and other major feast days and strictly prohibiting the traditional sacraments. He also proscribed celebration of Mass ad orientem without his permission.

“The intention of these requirements is to foster and make manifest the unity of this local Church, as well as to provide all Catholics in the Archdiocese an opportunity to offer a concrete manifestation of the acceptance of the teaching of the Second Vatican Council and its liturgical books,” Cupich explained.

The Coalition for Cancelled Priests had previously targeted Holy Name Cathedral and other Chicago churches with mobile billboards calling for the protection of the Latin Mass.

Other protesters also heckled Cupich when he appeared at an event Saturday for the Chicago March for Life.


Several protesters booed the liberal, pro-LGBT cardinal off the stage at the event, where Cupich described wearing a mask as a form of “promoting life.”

Protesters held signs reading “Cupich is the culture of death” and “Stop sacrilegious Communion.” “At the USSCB general assembly you did not respect the unborn,” one demonstrator yelled. “You’re evil, you’re destroying our Church,” said another.

Cupich has long been a top ecclesiastical ally of pro-abortion politicians, slamming a statement last year by USCCB president José Gomez that criticized Joe Biden’s pro-abortion, pro-LGBT platform ahead of his inauguration, for example. The prelate later helped organize a letter insisting that the U.S. bishops halt discussions about denying Holy Communion to lawmakers who promote abortion.

In 2015, Cupich infamously argued that “we should be no less appalled” by “crushing a child’s skull” than by racism and a “broken immigration system.” And as bishop of Spokane, Washington, he reportedly went so far as to prohibit priests from joining 40 Days for Life prayer vigils outside of abortion clinics.

The Coalition for Cancelled Priests is lay-led organization formed in July to support priests punished for unapologetically proclaiming the Truth. Cardinal Cupich himself notably “cancelled” one such orthodox priest, Fr. Paul Kalchik, who was pushed out of the Chicago archdiocese three years ago after his parish burned an LGBT flag installed in the parish church prior to his tenure.

Fr. Kalchik, a survivor of homosexual abuse, described the flag burning as an “exorcism.” Cardinal Cupich removed him from ministry and ordered him to a notorious pro-LGBT priest rehabilitation center due to the incident, prompting Kalchik to go into hiding at the time.

This article has been edited to reflect that the Coalition for Canceled Priests was not involved in protests at the Chicago March for Life.