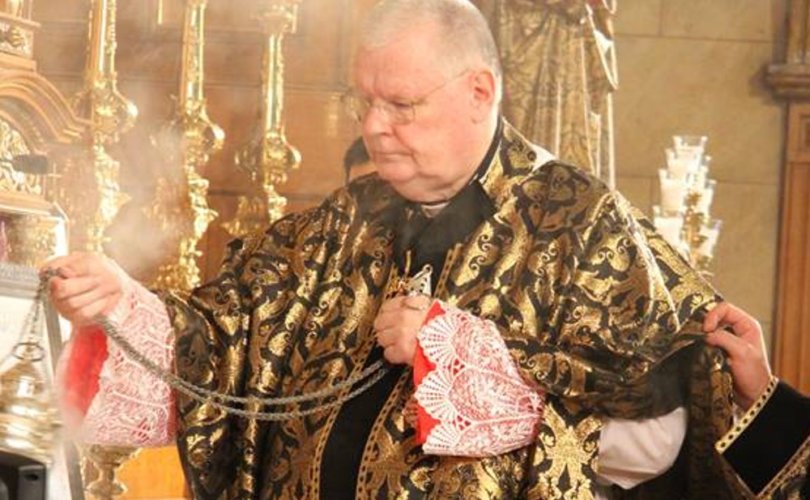 CHICAGO, Illinois, March 21, 2018 (LifeSiteNews) – A strange situation is unfolding at St. John Cantius, the Chicago parish known for its otherworldly liturgies, yellow-balloon touting youth at the March for Life, and faithful, orthodox priests.

Voted in 2016 the “most beautiful church in America” as part of the annual “Church Madness” competition, St. John Cantius is home to the Canons Regular of St. John Cantius, a religious order that offers Mass in the Extraordinary and Ordinary Forms, focuses on “restoring the sacred,” and aims to “preserve and foster the devotional, musical, catechetical, and artistic traditions of the Catholic Church.”

The choir at St. John Cantius has produced a number of successful sacred music CDs, and the priests of St. John Cantius are featured on learn-the-Latin-Mass materials for priests, seminarians, and altar boys.

Its priests, especially the order’s founder Father C. Frank Phillips, are highly regarded by parishioners and tradition-friendly Catholic priests around the U.S.

St. John Cantius parishioners were shocked, therefore, when this past weekend, a letter from Chicago’s ultra-liberal Cardinal Blase Cupich was read at Masses informing them Fr. Phillips had been removed as pastor over accusations of “improper conduct” with adult males.

“I find it very hard to believe these accusations that have been put forth against him…Fr. Phillips is a man that I can trust with the care of my wife, my children and, yes, my very soul,” parishioner Nick Chapello told Church Militant.

Even though it is standard procedure in most dioceses for priests accused of sexual impropriety – or even pedophilia and preying on minors, of which Fr. Phillips is not accused – to be placed on administrative leave, Fr. Phillips was immediately removed as pastor of St. John Cantius.

He is now facing a review by the board of the Resurrectionist order, of which he technically is a member even though he founded the Canons Regular of St. John Cantius. Cardinal Cupich has removed Fr. Phillips’ priestly faculties, preventing him from administering the sacraments or performing other priestly duties.

Fr. Phillips is not accused of committing any crime.

“I am aware this is difficult news to receive, but the Archdiocese of Chicago is committed to ensuring those serving our parishioners are fit for ministry,” Cupich said in his letter. “Know that this decision was made after careful consideration.”

“I hope for a swift resolution to this especially because I don’t believe the allegation. I just don’t,” Father John Zuhlsdorf wrote on his popular blog. “Given that Phillips seems not to have broken any civil laws the move against him seems pretty sudden and draconian, but I guess that’s what they do around there.”

Cupich’s hostility toward the Traditional Latin Mass has been public for years.

Retired bishop ‘stunned by the news’

“I was stunned by the news,” Bishop Rene Henry Gracida, Bishop Emeritus of the Diocese of Corpus Christi, wrote on his blog. He said that a few years ago, he traveled to St. John Cantius and offered a Solemn Pontifical High Mass for All Souls’ Day at Fr. Phillips’ request. It was “an unforgettable experience.”

What I find so disturbing in the news about the removal of Father Phillips is that the public way in which Cardinal Cupich removed Father Phillips was so uncalled for. Every bishop at one time or another is faced with the sexual misbehavior of a priest with a man or a woman who is not a minor. In the case of minors the Dallas Charter demands rapid and harsh measures by the bishop in handling the case. In the case of adults, such measures are not only not required but are inadvisable because of the scandal of the weak which results. Instead, the priest is suspended and quietly removed from office and no public announcement by the Ordinary is necessary, a simple discrete letter to the people of the parish is sufficient.

Cupich supports Jesuit who says gay priests should ‘come out’

Particularly strange is that Cupich would so quickly remove a priest accused of an inappropriate relationship with another male, given the cardinal’s lax attitude toward homosexuality. When New Ways Ministry, a group promoting homosexuality that has been condemned by the Vatican and the U.S. bishops, hosted its 2017 symposium in the Archdiocese of Chicago, Cupich was silent and didn’t try to stop the event from taking place.

Cupich has called Jesuit Father James Martin, one of the most vocal advocates for homosexuality in the Church, a “foremost evangelizer” of youth. He invited Fr. Martin, who supports same-sex couples kissing during Mass and the “coming out” as gay of young children, to speak at his cathedral this Lent after other Catholic institutions cancelled the Jesuit’s speaking appearances.

“I appreciate what he’s doing,” Cupich said of Fr. Martin. “I think he has a wonderful message.”

He said he wanted to “affirm” what Fr. Martin is doing. Fr. Martin, who refuses to say whether he himself is gay, says homosexual priests should “come out.” The pro-gay Jesuit’s name is being “dragged through the mud for no good reason,” according to Cupich. Of his invitation to Fr. Martin to speak at his cathedral, Cupich said, “I felt it was a matter of justice to speak up on behalf of him and to support him, but then also to do something actively, proactively, and that is invite him here and give him a platform to speak to people about the topic that he likes to talk about most, namely Jesus.”

Cardinal Cupich acquired a reputation in his former office as Bishop of Spokane as being totally opposed to the celebration of the Traditional Latin Mass in the Diocese. That fact combined with his welcoming of Father James Martin, S.J. to the Cathedral in Chicago to speak in support of the homosexual lifestyle that he promotes in his book Building Bridges, a lifestyle that sometimes involves the sin of sodomy, causes me to wonder if the removal of Father Phillips is not part of an elaborate plot leading to the suppression of Saint John Cantius Parish as a center for the promotion of the Traditional Latin Mass. The hypocrisy of removing Father Phillips as Pastor based on a possible false accusation of homosexuality on the eve of Father [Martin’s] talk at the Cathedral promoting ‘respect’ for homosexuals is too much for people of common sense to accept and to wonder about hypocrisy.

Cupich has written the foreword for a book supporting Communion for those living in unrepentant adultery and supports giving Communion to pro-abortion politicians.

The cardinal is also hosting a series of conferences on Amoris Laetitia – a document he is adamantly in favor of – for other U.S. bishops at dissident Catholic colleges.

Cupich has risen to prominence during the current pontificate, under which other traditional orders have been subject to extremely harsh treatment by the Vatican. The Franciscan Friars of the Immaculate, for example, have essentially had their order suppressed and gutted by the current Vatican administration.

Fr. Phillips has retained a lawyer, Steve Komie, who says the priest is looking forward to clearing his name.

St. John Cantius parishioners have created a website, prayforcantius.com, where people can sign up to participate in a round-the-clock Rosary for Fr. Phillips.

“We believe also that Father C. Frank Phillips and the Canons who have entered religious life under his direction are devoted workers in the New Evangelization sought by Pope St. John Paul II, Pope Emeritus Benedict XVI, and by Pope Francis,” it continues.

“Please join us as we pray, fast and offer sacrifices to the glory and honor of God for Father Phillips, the Canons Regular of St. John Cantius, the accuser(s), the Congregation of the Resurrection, and the Cardinal and his staff during this time of testing,” they ask.

The full letter from Cardinal Cupich can be viewed here.

And below is a statement from the Canons Regular of St. John Cantius, which was initially posted on their website but has now been removed:

We know that the news of complaints of inappropriate conduct against Fr. Phillips, our founder, present a difficult time for the faithful in our parishes and friends of our community.

The Canons Regular will remain focused on our mission of “Restoring the Sacred” and will continue our vital work at our parishes and apostolates.

Fr. C. Frank Phillips, C.R. our founder, has been pastor of St. John Cantius for 30 years and our superior for 20 years. As soon as Fr. Phillips became aware of the complaints he has been open and transparent with us, his community, and the Archdiocese of Chicago.

We ask for your patience and understanding while the Congregation of the Resurrection conducts an investigation into the complaints.

We hope and pray for a swift resolution to this matter and we ask that you keep the Canons Regular, Fr. Phillips, and any who are affected by this difficult situation in your prayers.

Numerous St. John Cantius parishioners have said to Catholic and secular press they think Fr. Phillips is innocent and will be cleared of any wrongdoing.