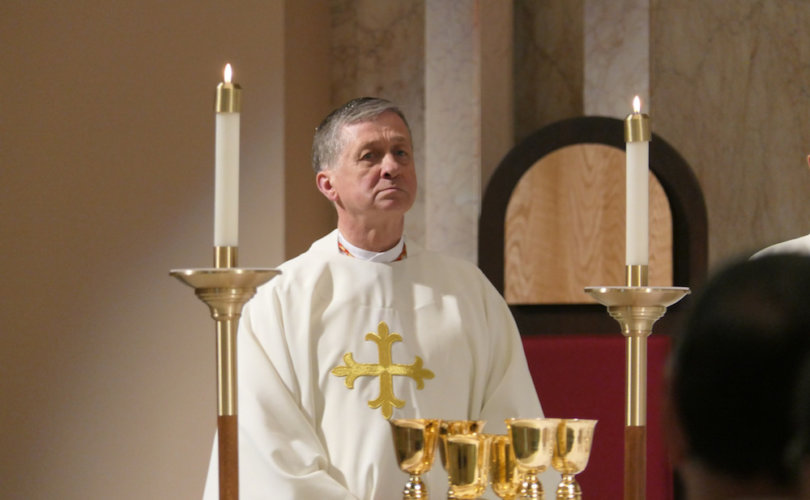 September 23, 2018 (LifeSiteNews) – Cardinal Blase Cupich has removed a priest in his archdiocese from his parish in apparent retaliation for his decision to burn a homosexualist “rainbow pride flag” previously used by the parish to promote the homosexual agenda.

According to NBC Chicago, a source close to the priest says that Cardinal Cupich removed Fr. Paul Kalchik from Resurrection Parish on Saturday, just before he was to minister a wedding. NBC reports that Cupich sent newly-installed Auxiliary Bishop Mart Bartosic to tell Kalchik to leave or be arrested for trespassing on parish grounds. Fr. Kalchik reportedly left with his brother to an undisclosed location.

Church Militant is reporting that a “pastoral associate” of Fr. Kalchik says that the priest has “gone into hiding, out of fear that Cardinal Cupich would take him away by force.” They also report that the removal occurred a day after two representatives of Cupich confronted Fr. Kalchik at the parish and repeatedly used “crude and threatening language” with him in front of parishioners.

Fr. Kalchik burned the flag last week after discovering it in storage in the parish, in a private ceremony with several parishioners that included an exorcism prayer. Kalchik rejects the pro-LGBT agenda of Cardinal Cupich and says he was sexually abused by a priest when he was 19 years old and by another man as a child.

The flag reportedly had a cross superimposed over the rainbow, an arrangement of symbols that Fr. Kalchik called “profane” and a “sacrilege.”

“So in a quiet way we took matters into our own hands and said a prayer of exorcism over this thing,” Kalchik told NBC Chicago. “It was cut into seven pieces, so it was burned over stages in the same fire pit that we used for the Easter vigil mass.”

Kalchik had initially called on parishioners to burn their donation pledge cards as well during the burning of the flag, while they “prayerfully sing Psalm 141, ‘Let my prayer arise before you like incense, my hands like an evening offering,’” according to the parish bulletin on Sept. 2, which announced the ceremony. Kalchik has also recently called on Catholics to boycott masses said by Cupich.

Cardinal Cupich was named by Archbishop Carlo Maria Viganò in his recent letter of “testimony” regarding homosexual corruption in the Church. “The appointments of Blase Cupich to Chicago and Joseph W. Tobin to Newark were orchestrated by McCarrick, Maradiaga and Wuerl, united by a wicked pact of abuses by the first, and at least of coverup of abuses by the other two. Their names were not among those presented by the Nunciature for Chicago and Newark,” wrote Viganò.  Church officials close to Pope Francis are also claiming that Vigano’s accusations stem from mental illness.

Cupich has complained that the Catholic Church is becoming “distracted” by the sex abuse scandals instead of focusing on the “environment” and “protecting migrants.” He said, “We’re not going to go down a rabbit hole on this.” He has also argued that the sex abuse crisis has little to do with homosexuality, and instead is the product of “clericalism,” echoing the rhetoric of Pope Francis.

The removal followed threats Kalchik says were made against him by two officials of the archdiocese who were claiming to speak for Cupich. Kalchik told PJ Media that Fr. Dennis Lyle and Fr. Jeremy Thomas of the Office of the Vicar for Priests had called and threatened him with “canonical penalties” and with rejecting his application to be moved closer to his parents should he proceed with the burning of the LGBT flag as he had announced earlier this month.

They also told him the Cardinal wanted him to have a “psychological evaluation,” a remark that seemed to Kalchik to be a dig against him for his post-traumatic stress resulting from his earlier experiences of sexual abuse.

“They said, ‘the cardinal wants you to know three things. First, you are not to burn the flag and if you do you should know there are canonical penalties for disobeying the cardinal. Second, you have put in a transfer request to move closer to your parents and that will not happen if you do this. Thirdly, the cardinal thinks you should get a psychological evaluation,’” Kalchick told PJ Media.

Kalchick called the cardinal’s message “very insensitive.”  “My condition is not a secret. All of my adult life I've been in treatment for the trauma of my youth,” he said. “But still I've managed to have a functional life and a very successful career.”

Church Militant reports that Lyle and Thomas then came in person to the parish under orders from Cupich and confronted Kalchik as he was about to celebrate the parish’s 6 pm Friday mass, in what Kalchik called a “full frontal attack.” Kalchik says that he refused to talk to the priests in private, and spoke to them with multiple parishioners present. He told the priests he had “done nothing wrong and was going nowhere,” in the words of one witness. The pair reportedly insisted that Kalchik be sent to St. Luke Institute for his “psychiatric issues.”

“I made it clear to them that I was not just going to cave and walk away from being pastor here at Resurrection Parish, and I stated clearly: I was once worked over by an ordained minister of the Church; it's not going to happen again,” Kalchik told Church Militant. “I will not leave Resurrection Parish on my own accord.”

LifeSite has made several requests for an interview with Fr. Kalchik, but has not yet received a response.

In a letter to members of Resurrection Parish following Kalchik’s removal, Cardinal Cupich defended his actions, but seemed to confirm Fr. Kalchik’s account of Cupich wanting a “psychological evaluation” of the priest.

“For some weeks now, I have become increasingly concerned about a number of issues at Resurrection Parish,” wrote Cupich. “It has become clear to me that Fr. Kalchik must take time away from the parish to receive pastoral support so his needs can be assessed.”

“I do not take this step lightly. Rather, I act out of concern for Fr Kalchik’s welfare and that of the people of Resurrection Parish,” wrote Cupich. “I have a responsibility to be supportive of our priests when they have difficulties, but I also have a duty to ensure that those who serve our faithful are fully able to minister to them in the way the Church expects.”

Contact the author of this article at [email protected]