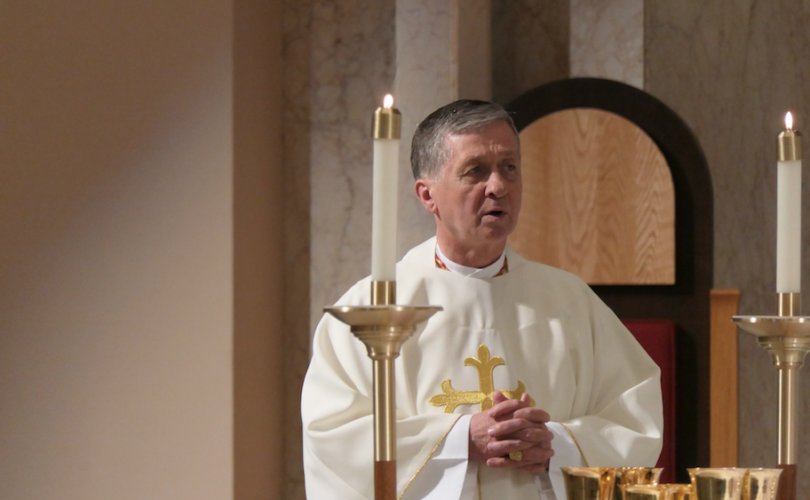 CHICAGO (LifeSiteNews) – Cardinal Blase Cupich is facing renewed criticism after announcing sweeping restrictions on the Traditional Latin Mass (TLM) in the Archdiocese of Chicago last week and amid outrage over irreverent Chicago liturgies.

Requests “should note the average attendance at such celebrations as well as their frequency and location, along with a statement of agreement to abide by the norms set forth in this document,” Cupich wrote. They must additionally “explicitly affirm ‘the validity and legitimacy of the liturgical reform, the teaching of the Second Vatican Council and the Magisterium of the Supreme Pontiffs,’ and demonstrate an appreciation ‘of the value of concelebration, particularly at the Chrism Mass.”

The liberal prelate’s new policy also strictly bans celebration of the Traditional Latin Mass on the first Sunday of each month, as well as on Christmas, the Triduum, Easter Sunday, and Pentecost Sunday, and prohibits saying Mass ad orientem without permission.

All traditional liturgies permitted under the directive must include Scripture readings proclaimed in the vernacular using the official translation of the U.S. Conference of Catholic Bishops.

“The intention of these requirements is to foster and make manifest the unity of this local Church, as well as to provide all Catholics in the Archdiocese an opportunity to offer a concrete manifestation of the acceptance of the teaching of the Second Vatican Council and its liturgical books,” according to Cupich.

The policy particularly restricts Latin Mass at parish churches, which now requires the approval of both Archbishop of Chicago and the Vatican and can take place only for members of traditional groups and when “it is impossible to use another church, oratory, or chapel.”

Cupich also curtailed celebration of the other sacraments according to the Old Rite, citing the Vatican’s recent Responsa ad dubia. Any priest seeking approval to use the 1952 Rituale Romanum “should first discuss with the faithful the possibility of using the reformed liturgical rites” and “demonstrate that he is accompanying them towards the common use of the one lex orandi of the Roman Rite,” the cardinal decreed.

In his preamble to the policy, he noted that “accompaniment” of Catholics who prefer the traditional Mass may include “visiting” them “to help them understand the essential principles of renewal called for in the Second Vatican Council and appreciate how the reformed Mass introduces them to a greater use of Scripture and prayers from the Roman tradition, as well as an updated liturgical calendar of feasts that includes recently canonized saints.”

Cardinal Cupich’s suppression of the Latin Mass was met with immediate backlash and fresh calls for his resignation. A change.org petition launched in 2018 urging him to step down topped 50,000 signatures on Monday.

“You certainly have a pastoral obligation to those in your Archdiocese who are attached to the Traditional Roman Mass, the essence of which may date in part to the first centuries of the Church,” Fr. Cipolla said. “But this obligation to your sheep is certainly not evident in your recent document of implementation of Traditionis Custodes in the Archdiocese of Chicago.”

Chicago is home to a nationally recognized Latin Mass community, which includes the U.S. headquarters of the Institute of Christ the King Sovereign Priest (ICKSP) and St. John Cantius parish.

“We, like many of you, receive this news with no little sadness, but we also recognize the challenge before us: to live more fully our charism, as outlined in our Constitutions. We have always recognized that ‘the core of our apostolate’ — our very purpose — is to restore the sacred,” he wrote. “In this moment, we are prayerfully discerning how to be a bridge for unity in the life of the Church by faithfully implementing the Archdiocesan policy in accord with our spiritual and pastoral patronage, as well as the guidance of the Archbishop of Chicago, and at the same time remain faithful to our mission.”

Cupich had hinted at a crackdown on the Latin Mass last month, suggesting that Catholics must “leave behind” the traditional liturgy in light of Traditionis custodes, which purported to declare the Novus Ordo Mass “the unique expression of the lex orandi” of the Roman Rite.

In an article for the pro-LGBT Pray Tell blog, Cupich said “there are not two forms of the Roman Rite, because the word ‘reform’ means something, namely that we leave behind a former way of celebrating the sacraments and adopt a new form.”

The Second Vatican Council never abrogated the TLM, however, as Pope Benedict XVI clarified in his 2007 letter Summorum pontificum. The Council, in fact, explicitly mandated that “the use of the Latin language is to be preserved in the Latin rites” and that “steps should be taken so that the faithful may also be able to say or to sing together in Latin those parts of the Ordinary of the Mass which pertain to them.”

Cupich has long been an opponent of the Old Mass. While bishop of Rapid City, South Dakota, he infamously locked the doors of a parish church in an unsuccessful attempt to thwart celebration of Latin Mass during the Triduum. The parish celebrated Mass on the sidewalk.

Cupich’s draconian approach to the TLM contrasts with his liberal, dissident affirmations of homosexuality.

The Chicago prelate permits LGBT Masses and has publicly endorsed allowing unrepentant homosexuals to receive Communion and funeral rites, going so far as to declare that priests may not deny the Eucharist to anyone in a state of homosexual sin. He has made similar comments about divorced and remarried Catholics and pro-abortion lawmakers.

Lori Lightfoot, the Methodist, lesbian mayor of Chicago, received Communion at a funeral Mass celebrated by Cupich in August.

The crackdown on the traditional Mass in Chicago comes amid criticism over recent liturgical abuses in the archdiocese.

The more than two-hour performance included a woman condemning racism “as natural as the air we breathe,” theatrical figures dressed like members of the Ku Klux Klan, and vulgar language during the apparent liturgy, which did not begin with an opening prayer or penitential act, as is required in the rubrics of the Novus Ordo Mass.

Fr. Michael L. Pfleger, St. Sabrina’s senior pastor who led the event, also deviated from the approved texts of the words of consecration.

“This is sheer blasphemy, and I don’t even know if this can be called a Holy Sacrifice of the Mass,” a YouTube commentator wrote.

“Absolutely repulsive act of irreverence on the Eve of Christ’s birth,” wrote another.

Pfleger is a well-known far-left social activist who has been repeatedly suspended from ministry, most recently in January 2021, after several men accused him of sexually abusing them when they were children. Cupich reinstated Pfleger in May, after a review by the archdiocese that Cupich said found “insufficient reason” to support the allegations.

The cardinal himself has drawn fire for incorporating pagan elements into the Holy Mass on numerous occasions.

In January 2020, he led a “lion-awakening” ritual in honor of the Chinese Lunar New Year immediately before Mass at an Illinois Catholic high school, imparting a pagan “Good Fortune” blessing to a Chinese dragon figure.

Cupich had performed a similar ritual at St. Therese Chinese Catholic Church in 2016, where he celebrated the Eucharist for the Lunar New Year at an altar draped with the image of a dragon and adorned with pagan symbols. He also notably incorporated a Hindu arati ritual – part of the so-called “Indian Rite Mass” – while presiding over Mass in Rome, Church Militant reported.