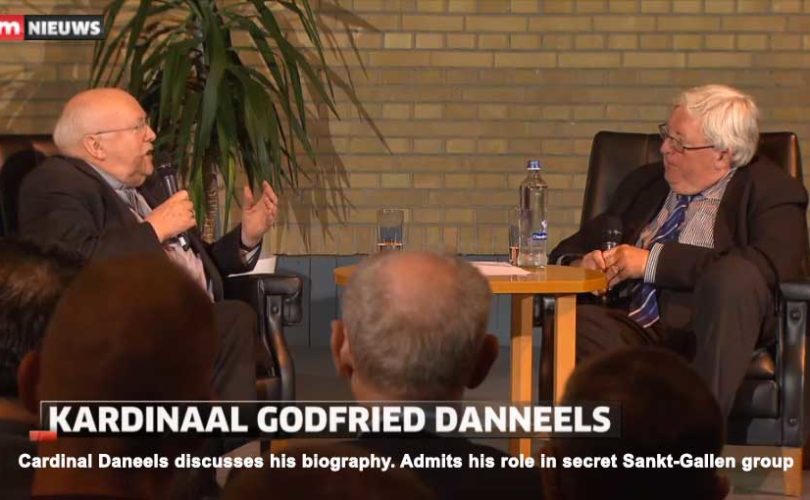 September 25, 2015 (LifeSiteNews) – The authorized biography of Cardinal Godfried Danneels, out next week, is even more of a bombshell than expected. Not only do the two authors, Jürgen Mettepenningen and Karim Schelkens, reveal that the Cardinal was a regular member of a secret pressure group of Churchmen that met in the Swiss town of Sankt-Gallen, but the Cardinal himself has publicly and good-humoredly admitted the fact.

Danneels even said that what was officially but discreetly labeled “the Sankt-Gallen group” was referred to by its members as “the Mafia”. Its self-imposed aim was to counter the growing influence of Cardinal Ratzinger under the pontificate of Saint John Paul II, serving as a sort of outlet where handpicked cardinals and bishops could express their impatience at the traditional mindset of the Pope and his closest counsellor.

The Belgian press doesn't hesitate to say that one of the group's primary goals was the promotion of Cardinal Bergoglio (now Pope Francis) in view of John Paul II’s nearing death – something the book itself, which is not yet available in bookstores, perhaps clarifies. The Sankt-Gallen group certainly aimed to promote the ideas and preferences for which they had found a champion in Pope Francis.

Said Schelkens in an interview this week: “The election of Bergoglio was prepared in Sankt-Gallen, without doubt. And the main lines of the program the Pope is carrying out are those that Danneels and Co were starting to discuss more than ten years ago.”

“They wanted Church reform, they wanted to bring the Church closer to the hearts of people; they moved forward by stages,” commented Mettepenningen. “At the beginning of the year 2000, when John Paul II’s end was becoming more foreseeable, they thought more strategically about what was going to happen to the Church after John Paul II. When Cardinal Silvestrini joined the group it took on a more tactical and strategic character.”

The new climate in the Church after Pope Benedict’s resignation made these things easier to discuss, according to Mettepenningen.

“It is only now that the existence of a society of same-minded Church leaders can be made known to the public,” he told the Dutch media KerkNet. “In the international press they were talking about the so-called ‘team Bergoglio’ that promoted his choice as Pope, but the name was badly chosen.

In 2013, it was about the content first, the person came afterwards. Danneels took part in both conclaves. He openly showed his disappointment after the first one. He described the second one, in which Pope Francis was elected, as his “personal resurrection.”

The biography was presented earlier this week at the National Sacred Heart Basilica in Koekelberg, in the presence of Cardinal Danneels who endorsed the two authors’ work.

A short video of the event was published on the Internet: it concentrates on the Sankt-Gallen group whose existence had never been revealed to the public.

Says Cardinal Danneels: “The Sankt-Gallen group is a sort of posh name. But in reality we said of ourselves, and of that group : ‘The Mafia’.”

A voice-over continues: “Cardinal Danneels speaks for the first time of the secret group of Church leaders to which he belonged. The group met every year since 1996, and together they organized the secret ‘resistance’ against Cardinal Ratzinger, who at that time was the right-hand man of John Paul II.”

Then Cardinal Danneels speaks again: “There were some bishops, a few cardinals – too many to name. Things were discussed very freely, no reports were made, so that everyone could blow off steam.”

The journalist explains: “When Pope John Paul II died in 2005, the group already pushed the present Pope to the fore. But it was to be Ratzinger all the same. Danneels could hardly hide his disappointment.”

The video cuts back to images of the cardinal just after Benedict XVI’s election: “The proof of the pudding is in the eating,” he said, unpleasantly, at the time.

The voiceover goes on: “It was not to be long until the Sankt-Gallen group got a new chance, because unexpectedly, Pope Benedict resigned.”

The journalist concludes: “That is why you could see him beaming on the balcony next to the Pope in Rome. Since then he has returned regularly to Rome to speak with the Pope.”

The Sankt-Gallen group – or the “Mafia”, to use the cardinal’s own description – was founded by Mgr Ivo Fürer, one year after his nomination as bishop of the small cathedral town. Cardinal Danneels joined a few years later.

Among the other members quoted by his biographers, Cardinals Carlo Maria Martini and Achille Silvestrini from Italy, Walter Kasper and Karl Lehmann from Germany, and the Dutch Cardinal Adriaan van Luyn as well as Basil Hume from England were prominent. There must have been more, as the book also speaks of members from Austria and France, as well as unnamed bishops. Why are some named, and others not? Did the named prelates give their consent to be “outed,” and if so did they have an objective?

Whatever their aim, Danneels for one has had no qualms about voicing his angry opposition to Pope Benedict and seems to glory in the fact that he has played a role in bringing a more “modern” Church vision into being, despite the fact that the Pope Emeritus is still alive.

Church historians Mettepenningen and Schelkens were given full access to Danneels’ personal archives which still bore the police tape that sealed them in the wake of the cover-up of a child-abuse scandal in which the Cardinal was accused of being involved. This is perhaps one of the clues to the disclosure of the “Mafia’s” existence: Danneels left his Episcopal palace under a cloud when he retired in 2010. Being presented as a “maker of kings,” as the Belgian press now calls him, is a deal more flattering and gives him a prominent role in bringing about the modernization of the Church.

Mettepenningen justified the group’s existence in an interview to the Flemish press: “During the lengthy pontificate of John Paul II there was an increasing tendency to centralize everything that was imposed from the top, with the margin of ‘free speech’ becoming ever narrower. From 1996 onwards, a group was erected in Sankt-Gallen by the bishop of Sankt-Gallen, a group of top cardinals and bishops from Europe who found their ‘freedom of speech’ with one another there. Since 1999, Cardinal Danneels was himself a member; together with Ivo Fürer, he was the member who belonged longest to the group.”

“Nobody knew anything about it but there were suspicions in Rome, where they were ‘not amused’ to know about this group that we called Sankt-Gallen in the biography – and which the cardinal, apparently, calls the Mafia, but it’s a term of endearment, showing a certain mischievousness.”

The Flemish media, Knack, that presented the book in a lengthy article, says the Vatican sent “the sinister Cardinal Camilo Ruini to try and find out who, what and where: he came up with an empty sack. At the same time, the Sankt-Gallen group tried to get a hold over developments in the Vatican. The question that was put more and more emphatically was: 'What after John Paul II? How can we avoid Ratzinger as Pope?'”

While the group’s existence was known of by some specialists – such as Austen Ivereigh of the Tablet who spoke of it in passing in The Great Reformer, his biography of Pope Francis – what Mettepenningen and Schelkens have published is an inside account, with the blessing of Danneels who remembers the meetings as “spiritual holidays,” a “form of mutual support and comfort in dark times,” as Knack puts it.

Danneels’ biographers show him to be a man who lost favor in Rome over his progressive stances. In 1980, at the general bishops’ synod which he was attending for the first time, Ratzinger expressed pessimism over divorce and general moral decay. Godfried Danneels responded that it was time to find a new “balance between the law and mercy.”

“That was new,” says Knack: when the time came for the synod to elect delegates, Danneels got more votes than Ratzinger. The same Danneels was vocal in his defense of a former fellow student, Gustavo Gutierrez – a liberation theologian who was in trouble with Ratzinger. Later, Rome was to block his nomination as president of the European bishop’s conference.

Saint John Paul II’s Apostolic Constitution Universi Domini Gregis, 79, clearly condemns the constitution of a “Mafia” like the Sankt-Gallen group: “Confirming the prescriptions of my Predecessors, I likewise forbid anyone, even if he is a Cardinal, during the Pope's lifetime and without having consulted him, to make plans concerning the election of his successor, or to promise votes, or to make decisions in this regard in private gatherings.”

Ironically, he published the Apostolic Constitution in February 1996, the very year that the Sankt-Gallen group was formed.