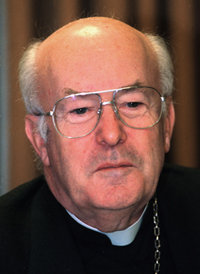 BRUSSELS, Belgium, April 22, 2015 (LifeSiteNews.com) — Two Belgian politicians have openly stated that Cardinal Godfried Danneels, former archbishop of Mechlin-Brussels in Belgium and a personal pick of Pope Francis to take part in the Synod on the Family, tried to convince King Baudouin that he should sign the Belgian abortion bill into law in 1990. The King was deeply reluctant to go against his personal respect for innocent human life and a major political crisis was looming over his refusal to cooperate.

King Baudouin remained firm in his determination not to participate in any way in the legalization of abortion. He finally accepted formally to ask the government to find a “solution” that would “guarantee respect for parliamentary democracy.” This resulted in his fictitious stepping down as King of the Belgians for 36 hours while the law, which had been approved by the legislature five days previously, was signed by the 14 members of the government in the night from April 3-4, 1990. The Belgian Parliament voted the King back into office on April 5. The Belgians were only to be informed of the dramatic events later that day.

Cardinal Danneels has refused to comment on Moureaux’ and Eyskens’ statements.

Cardinal Danneels alleged role in the affair was mentioned in 2001 by his biographer Peter-Jan Bogaert, although he did not say whether the cardinal had indeed spoken directly with the King about the matter. While it is certain that the cardinal was personally opposed to the legalization of abortion, he is also known to have said that he “totally approved the separation between Church and State,” considering the Church as having “no political power whatever.” Bogaert specified: “The cardinal acknowledges that we live in a pluri-cultural society and that its standards increasingly clash with the Church’s teachings.” At the time, the cardinal did not comment either on what amounts to an accusation, at least in the eyes of conservative Catholics.

Fourteen years later, it appears that not only did Cardinal Danneels exert pressure on the King, but that he was used by the coalition government of the Christian Democrat Wilfried Martens – the prime minister who signed the abortion bill even though he refused to vote for it – in order to move out of the constitutional deadlock created by the King’s conscientious objection.

During the days that preceded the King’s “incapacitation,” Martens and other ministers went to see him and argued for hours against his refusal to sign the bill into law. Baudouin told them his stance was not a religious one: “If you, Claes,” he said to one of them, “were to come here with the Pope from Rome, I would still say no.” “Don’t look for a link with religion: you know that I am a profound believer, but for me it is a question of the respect that I have for human life,” he stressed.

The King’s refusal to budge prompted the Belgian government to call on Cardinal Danneels, a fact on which Belgian politicians commented for the first time in front of a camera on April 6 of this year, according to the Flemish TV VTM. According to Moureaux, the government arranged a “cautious and discreet” intervention on the part of Danneels “who would always be present at the Royal Family’s family events: he conducted all the royal marriages and baptized the King’s nieces and nephews,” says Moureaux. “He was in a way the Royal Family’s chaplain and conscientious director,” adds Mark Eyskens. “But, no result.”

Willy Claes links King Baudouin’s refusal to his own personal tragedy: he and Queen Fabiola were to remain childless after the Queen suffered four miscarriages. A biography of the Belgian King by Prince Stefane van Lobkowicz claims that she almost died during her first pregnancy, and that the King pleaded for her life to be saved, even if that were to mean aborting the child she was carrying. Fabiola is said to have refused “once and for all,” saying that being forced to abort would signify the end of their marriage and her retirement into a nun’s cloister. The same book, published in 1996, mentioned for the first time that Cardinal Danneels had intervened in order to convince the King that he should sign the abortion law.

A spokesman for the Royal Family reacted officially, saying that Danneels had never “in any way put pressure” on Baudouin – which doesn’t necessarily mean that he did not try.

On April 5 of this year, Cardinal Godfried Danneels was interviewed by the French-speaking television rtl.be. He calls the anniversary of the Belgian abortion law “unacceptable,” to be “marked by a black stone,” “not only because of what the law says but because of the slippery slope which is turning abortion into an ordinary act” – not on the part of the woman, but of the law. “I think some women suffer very much” because of the law, he says.

Asked whether the law should be revoked, Danneels answers: “It is always within the bounds of politics and of Parliament to create a legal framework. It is evidently not a moral norm, because morals are something different from a legal framework that is made. The State can do that. But I regret very strongly that, increasingly, values are being completely lost, because the life of a tiny child, of an infant, is a human life. … Values that should be self-evident, such as the protection of life, are being lost and we are not even conscious of the fact, and I believe that often women who face this difficulty, who have had an abortion, suffer a great deal more than we think: it is not an ordinary act in a women’s experience, I am sure.”

Danneels does not answer directly on the point of his intervention – or not – to make King Baudouin sign the Belgian abortion law, but the distinction he makes between “moral norms” and “legal frameworks” which are of the responsibility of the State do show that he accepts the existence of legalized abortion insofar as it is the result of a political decision, and that would suggest that he would not have refused in principle to advise the King to sign the law.

But this sort of reasoning, which reposes on a complete separation between political decisions and moral norms, would of course justify any crime legalized by a democratic or legitimate majority.

Cardinal Danneels is rated as a “liberal” cardinal. LifeSiteNews reported in June 2013 that Danneels referred to “gay marriage” laws as a “positive development.” His intervention at the Synod on the Family, where he was personally named as a Synod Father by Pope Francis, was ambiguous and “carefully measured,” but tailored to preach “mercy” for “remarried” divorcees and silent on the sufferings of abandoned spouses.