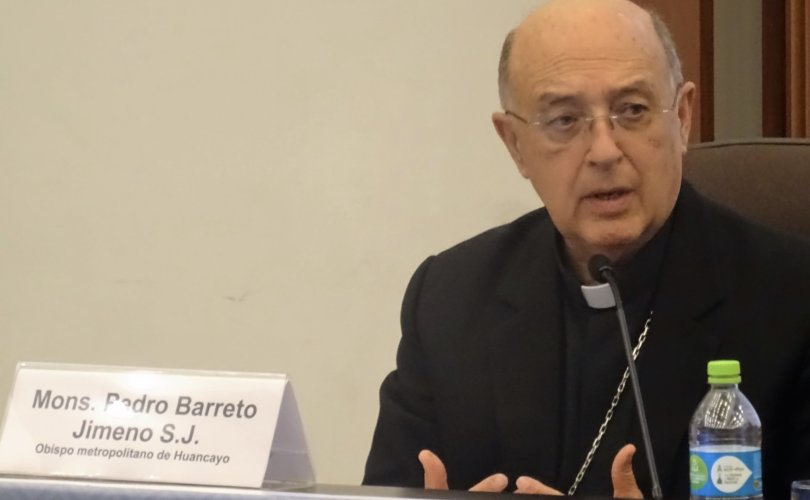 LIMA, Peru, July 18, 2019 (LifeSiteNews) – Peruvian Cardinal Pedro Barreto Jimeno is defending the upcoming Amazon Synod, saying its controversial working document (Instrumentum laboris) — which some high-ranking prelates have deemed “heretical” — is “an expression of the voice of the people of God.”

The synod’s working document “largely expresses the feelings and desires of many representatives of the Amazon people,” wrote Barreto Jimeno, a Jesuit who was made a cardinal by John Paul II in 2004, in the Jesuit magazine La Civiltà Cattolica on Thursday.

Last month, Cardinal Brandmüller, one of the remaining dubia cardinals, issued a critique of the document, calling it “heretical” and an “apostasy” from divine revelation. He called upon Church leaders to “reject” it with “all decisiveness.”

Earlier this week, Cardinal Müller, former Prefect of the Congregation for the Doctrine of the Faith, criticized the document for its “radical U-turn in the hermeneutics of Catholic theology” and for its “false teaching.”

Instrumentum laboris asks the Church to study the possibility of “wise elders,” who could be married men, to be allowed “priestly ordination” to “ensure the sacraments for the most remote areas of the region.” In addition, the Church is being asked to consider “an official ministry that can be conferred upon women, taking into account the central role they play in the Amazonian church.”

One of the authors of the synod’s working document, Bishop Erwin Kräutler of Austria, recently told Austrian TV that he maintains “hope” the synod will approve the ordination of women as deacons, in addition ordaining married men. Currently, for most of the Latin rite of the Catholic Church, only celibate men are ordained to the priesthood. In the various Eastern rites, however, there are married priests. Kräutler said it is a “scandal” that priests in some remote regions can only visit some parishes but once or twice a year to celebrate Mass.

Barreto Jimeno, who leads the archdiocese of Huancayo in southeastern Peru, wrote in Civilita Cattolica that the Amazonian region is “an increasingly devastated and threatened territory,” and he deplored extractive industries that have contributed to conflicts with native peoples, deforestation and pollution. He said the agenda, which was released June 17, came out of consultation with some 90,000 people over the two years in advance of the meeting. He asserts that this process was an “unprecedented experience” for a synod, adding that it “gives a good account of what is happening in this region.”

“We believe that the expression of this richness will bring, beyond any suspicions, elements for a better understanding of a reality that is crying out for attention,” he wrote.

“For us members of the Catholic Church in the Amazon, we want to be living witnesses to hope and cooperation,” he wrote, adding, “In this sense, as an ecclesial event, the Synod can be an important sign of the effective response promoting justice and the defense of the dignity of the people most affected.”

While he skirted theological issues, Barreto Jimeno applauded Pope Francis’ focus on the rights of indigenous peoples and environmental issues. He also asserted that “climate change” is an “unavoidable global ecological crisis” and applauded the Amazonian nations that are signatories of the globalist environmental pact known as the Paris Agreement.