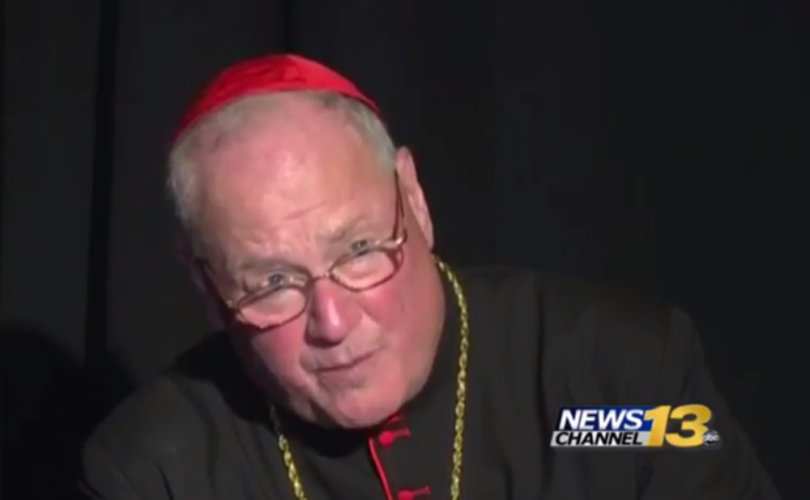 Cardinal Timothy Dolan speaks with a reporter after The Bishop’s Respect Life Dinner on Monday night in Colorado Springs.

COLORADO SPRINGS, Colorado, October 19, 2016 (LifeSiteNews) – New York Cardinal Timothy Dolan called for Democratic presidential candidate Hillary Clinton to disassociate herself from anti-Catholic statements made by her campaign chairman and said the remarks were “extraordinarily patronizing and insulting to Catholics.”

Asked about the anti-Catholic comments after speaking at The Bishop’s Respect Life Dinner on Monday night for the Diocese of Colorado Springs, Cardinal Dolan suggested that had other faith traditions been the target of the prejudiced remarks, there would have been a swift apology and absolute disavowal of them.

But as far as an apology from Clinton for the remarks demeaning Catholics, “Hasn’t happened yet,” Cardinal Dolan said.

Emails released last week by WikiLeaks showed Clinton Campaign Chairman John Podesta and Director of Communications Jennifer Palmieri, both Catholics, in conversations with activists from two left-wing organizations. In the emails, Catholics were debased, with their beliefs being called “severely backwards.” Conservative Catholics also were accused of “an amazing bastardization of the faith,” and Rupert Murdoch was mocked for baptizing his children as Catholics in the River Jordan.

The U.S. Church’s bishops were slammed in the emails as well, referred to as “a middle ages dictatorship.”

Palmieri said in one of the emails she thought conservatives that had come to Catholicism did so because “they think it is the most socially acceptable politically conservative religion,” and that “their rich friends wouldn't understand if they became evangelicals.”

Podesta admitted to helping launch a “progressive” infiltration of the Church in another email, and he took an active role in attempting to incite a liberal Catholic revolt against the U.S. bishops.

“We created Catholics in Alliance for the Common Good to organize for a moment like this,” Podesta wrote. “But I think it lacks the leadership to do so now. Likewise Catholics United. Like most Spring movements, I think this one will have to be bottom up.”

The “Catholic Spring” Podesta referred to had been broached in the email by Center for Progress President Sandy Newman, who had pondered, how one would “plant the seeds of the revolution,” or “who would plant them.”

Hi John. This whole controversy with the bishops opposing contraceptive coverage even though 98% of Catholic women (and their conjugal partners) have used contraception has me thinking … There needs to be a Catholic Spring, in which Catholics themselves demand the end of a middle ages dictatorship and the beginning of a little democracy and respect for gender equality in the Catholic Church.

“Hasn't happened yet,” he stated.

The cardinal, who is chair of the U.S. Bishops’ Committee on Pro-Life Activities, then said he’d like to see the Democratic candidate disassociate herself from the offending comments.

“I'm hoping that she's going to distance herself from these very insulting remarks by her chief of staff,” Cardinal Dolan said.

He also told the news station that he trusts people to be guided by their moral convictions, and he expects people to be “acquainted with the issues.”

The Clinton campaign has not acknowledged the anti-Catholic emails, though they have been played down by at least one Democratic operative and Democratic vice presidential nominee Tim Kaine, also a Catholic.

Catholics, some of who have also called for Podesta’s firing, have roundly criticized the email comments.