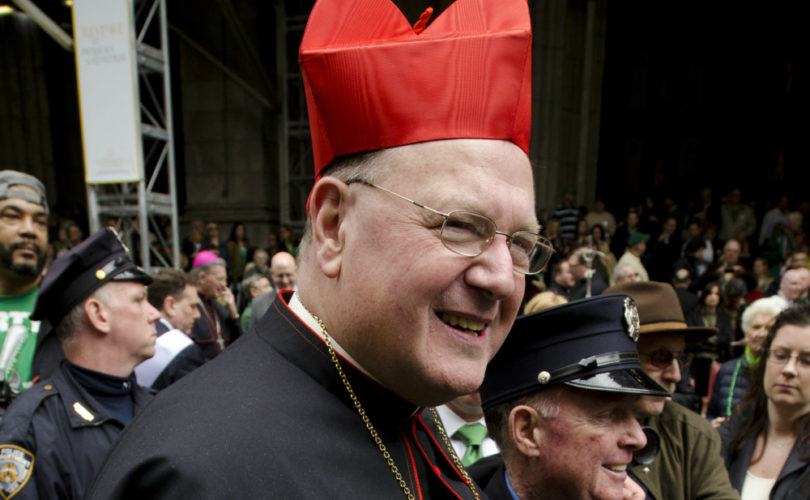 In a letter dated May 5 and published late last month by Outreach, Dolan praised the organization, which Martin launched this year, describing it as “an important ministry” ahead of its annual conference in June.

“Thanks for the chance to greet you as you gather for the Outreach 2022 conference at Fordham University,” Dolan wrote. “No one should ever feel that they are alienated from God’s love or ineligible for His grace and mercy.”

“Jesus’ last words to his disciples before His ascension into heaven was to ‘Go, therefore, and make disciples of all nations, baptizing them in the name of the Father, the Son, and Holy Spirit.’ That’s ‘outreach!’”

The cardinal concluded by expressing his hope that the conference, which featured transgender and homosexual activists and prominent dissident Catholics, would “strengthen you.”

Martin launched Outreach at the beginning of May in partnership with America Media, which publishes the U.S. Jesuits’ America magazine. The group has particularly pushed for churches to support LGBT “pride” month, which often involves aggressive sexualization of young children and public displays of nudity and sex acts.

In his letter, Cardinal Dolan commended Outreach for allegedly working for “the virtue of chastity,” though nothing on the group’s website affirms Catholic doctrine on chastity and Martin has claimed that homosexuals do not need to live chastely.

Martin has also notably encouraged same-sex “marriages,” suggested that Catholic teaching about the sinfulness of homosexual acts is not “authoritative,” and recently appeared to defend giving puberty blockers to children with gender dysphoria.

The Outreach conference included numerous high-profile pro-LGBT Catholic figures, such as Bishop John Stowe of Lexington, Kentucky, who has joined “pride blessing” ceremonies and attacked the Church’s teaching on homosexuality.

One of the keynote speakers of the conference was Fr. Bryan Massingale, an openly homosexual priest and Fordham University professor who supports same-sex “marriage” and has denied the existence of absolute moral laws.

Notorious LGBT activist Sister Jeannine Gramick, co-founder of New Ways Ministry, also addressed the conference. The Vatican permanently banned Gramick from pastoral work with homosexual individuals over her wholesale rejection of Catholic teaching on sexuality, though she has openly defied the order for decades.

Among the most egregious speakers was Dr. Colt St. Amand, a woman who presents herself as a “transgenderqueer Two Spirit man.” St. Amand, a psychologist, provides “mental health letters” for “face, chest/breast, and genital surgeries” for “transgender” clients and assists them to obtain puberty blockers and “transition in school,” her website states.

According to Martin, Cardinal Dolan had previously lent his support to a pro-LGBT conference that the dissident priest had planned for 2020 but which was postponed due to COVID-19. A video featuring speakers who were set to address the event predictably included challenges to Catholic sexual ethics.

Dolan’s endorsement of Outreach follows similar backing from Pope Francis, who wrote a letter to Martin in May published through Outreach condemning Catholics’ alleged “rejection” of people who identify as LGBT.

But days before the June conference, Cardinal Gerhard Mueller, former prefect of the Congregation for the Doctrine of the Faith, took a different tone, slamming Martin’s activism as “heresy” in an interview with LifeSite’s John-Henry Westen.

Martin “cannot change” Church teaching about homosexuality, even “with all his political actions, and his networking, and all the propaganda he is making,” the eminent German cardinal said. “What he’s doing, that is a heresy, absolutely heresy. Nobody can justify it.”

“And it is absolutely clear that for every priest, cardinal, and the pope, every bishop must be absolutely faithful to the revealed faith and to the natural law which is given to us” Cardinal Mueller continued.

“They are contrary to the natural law” and “do not proceed from a genuine affective and sexual complementarity. Under no circumstances can they be approved,” the Catechism adds.

The Catechism additionally reiterates that the homosexual inclination “is objectively disordered” and stresses that God creates every human person male or female. “Each of them, man and woman, should acknowledge and accept his sexual identity,” the Catechism insists.