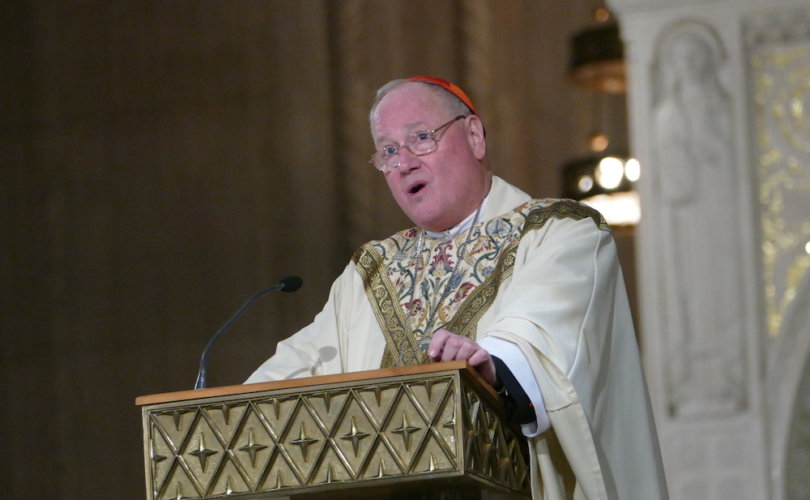 Dolan, the Chairman of the Bishops’ Committee on Pro-Life Activities, delivered an update on the bishops’ pro-life efforts. Part of this update highlighted the 50th anniversary of Humanae Vitae, Pope Paul VI’s encyclical upholding the Church’s opposition to artificial contraception.

“In 1968, Blessed Pope Paul VI prophetically reminded us of God’s noble original design for the married love of husband and wife,” said Dolan. “For those who were willing to accept the wisdom and the vision of Humanae Vitae, as challenging as it may be, they found beauty and freedom in the Church’s teaching.”

“We’d like to use the occasion of the 50th anniversary to lift up that truth, beauty, and freedom” that come from following the Church’s teachings on human sexuality, he said.

“Humanae Vitae, of course, gave a prophetic, positive vision of love and life,” Dolan explained. “But it also gave a sober warning of where we were heading if we chose a different path.”

There’s “no question” that the late pope’s prediction that “a widespread contraceptive mentality would lead to ‘marital infidelity and a general lowering of moral standards’” has come true, said Dolan.

Paul VI “warned that ‘a man who grows accustomed to the use of contraceptive methods may forget the reverence due to his partner, a woman, and disregarding her physical and emotional equilibrium, reduce her to being a mere instrument for the satisfaction of his desires,’” he continued. “Boy, in so many ways today, we see persons used for the satisfaction of others and discarded when they no longer bring pleasure or become inconvenient.”

Thanks to the influence of contraception, “domestic violence, human trafficking, pornography, sexual harassment, assault, abuse, and the general demeaning of women” have all become commonplace.

“Predicting, unfortunately accurately, government-forced contraceptive mandates, Blessed Paul VI warned, ‘should they [the government] regard this as necessary, they may even impose their use on everyone,’” Dolan continued. “Right again!”

The cardinal noted the pro-contraception “ideological colonization” Western nations impose on less developed countries and the U.S. government’s HHS contraception mandate as examples of this.

He noted the end of the HHS mandate already faces legal challenges, “and there’s always the danger that a future administration could simply restore the mandate.”

Dolan said a major pro-life public policy priority of the U.S. bishops is the passage of the Conscience Protection Act, which would prevent healthcare professionals from being forced to assist with abortions.

“It’s astounding that we’re now at the point of having to beg for the right of individuals and health institutions to not be forced to assist in abortions or provide coverage for it,” Dolan mourned.

Dolan said some positive pro-life news is how many states have defeated assisted suicide legislation this year.

The U.S. bishops’ pro-life efforts range “from speaking up for the voiceless unborn baby to defending the mother with a challenging pregnancy to providing pastoral care and love to women and men who have been wounded by the horror of abortion to countering the growing threat of assisted suicide and the lack of respect for people with disabilities and those who are sick [and] near death,” said Dolan.

“Likewise, we stand up as loyal American citizens for our very right to practice what we preach in the fact of many threats to the rights of conscience,” he noted.

Naumann won 96 votes and Cupich won 82. The voting was anonymous. Although Naumann’s election came as a major relief to the pro-life movement, it also showed that nearly half of the voting bishops would prefer as their go-to prelate on abortion one who essentially banned his priests and seminarians from praying outside abortion centers.