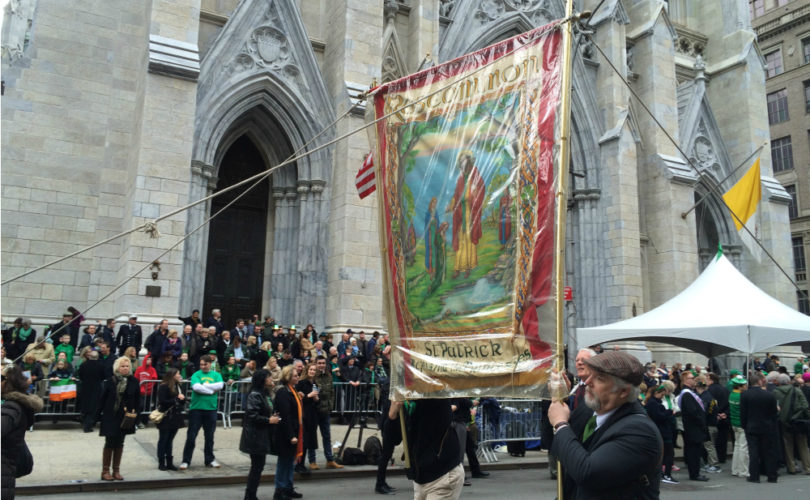 “I’m as radiant as the sun, so thanks be to God for the honor and the joy,” said Cardinal Dolan on Tuesday morning, as he led 250,000 marchers down Fifth Avenue – including a delegation from “Out @ NBC Universal,” a group of gay activists who work for NBC, the network that televises the parade.

Catholic commentator Michael Voris and his team from ChurchMilitant.TV were present at the parade and were able to question Dolan on his decision during a press scrum. “Your Eminence, do you have anything to say to the loyal Catholics who find what you’re doing here a great scandal to the faith?” Voris asked.

Voris reports that he and his cameraman were then removed from the press scrum, providing video of an official telling them to leave, and then calling police over to escort them out of the area.

Both the parade’s organizers and Cardinal Dolan drew criticism from faithful Catholics last year by approving [email protected] Universal’s request to march in this year’s parade, under a banner that makes reference to their homosexuality.  The controversial decision prompted the Catholic League and at least one Catholic school to pull out of the parade, while nearly 5,000 people signed a petition urging Cardinal Dolan to withdraw from the event as a show of support for Catholic teaching forbidding homosexual behavior.

But the cardinal refused to back down, expressing support for the group’s inclusion.  “I have no trouble with the decision at all,” Cardinal Dolan said at a press conference announcing his appointment as grand marshal. “I think the decision is a wise one.”

Meanwhile, the parade’s organizers further upset rank-and-file Catholics by refusing to let a pro-life group march, saying they didn’t want to risk taking attention away from the gay group.

“That won’t be happening,” parade committee vice chairman John Lahey said of the pro-life group’s request to march. “What we want to do is keep 2015 focused on the gesture of goodwill we made towards the gay community with the inclusion of [email protected]”

For the second year in a row, New York City Mayor Bill de Blasio refused to attend, saying that despite all the controversy, the organizers behind the celebration of Ireland’s patron saint haven’t done enough to make the event gay-friendly.

According to the mayor, while he saw the inclusion of a single homosexual group as “progress,” he won’t participate in the parade until it is “open to [homosexual groups] who would like to participate who don't happen to work for NBC.”

“Having only one delegation associated with one company that allows members of the LGBT community is, obviously, a pretty narrow concession,” said de Blasio, after marching in the gay-oriented “St. Pat's for All” parade in Queens on Sunday. “We'd like to see something that's more inclusive.”

“I will not be marching [in Tuesday’s parade], but I look forward to progress in the future,” de Blasio stated, at an unrelated press conference the following day. “I do think the first step was taken this year and I'm hopeful that soon there'll be others taken.”

It seems likely that de Blasio’s hopes will be realized.  While at least one homosexual group was turned away from participating in this year’s St. Patrick’s Day parade, organizers were quick to note that it was simply a matter of the available slots having been filled prior to the group’s application to march, and said homosexual groups were “welcome” to apply for slots in 2016’s parade.

Meanwhile, a number of Catholics disillusioned by the organizers’ actions offered an alternative event on Tuesday at Church of the Holy Innocents, not far from the festivities on Fifth Avenue.  Proudly on display was the Children First Foundation’s “Choose Life” banner – the same one that was rejected by parade organizers.  The event, dubbed the “St. Patrick’s Day Lenten Pilgrimage,” included four Masses, the opportunity for Confession, and a prayer vigil for unborn children.

Cardinal Timothy Dolan, are you listening?