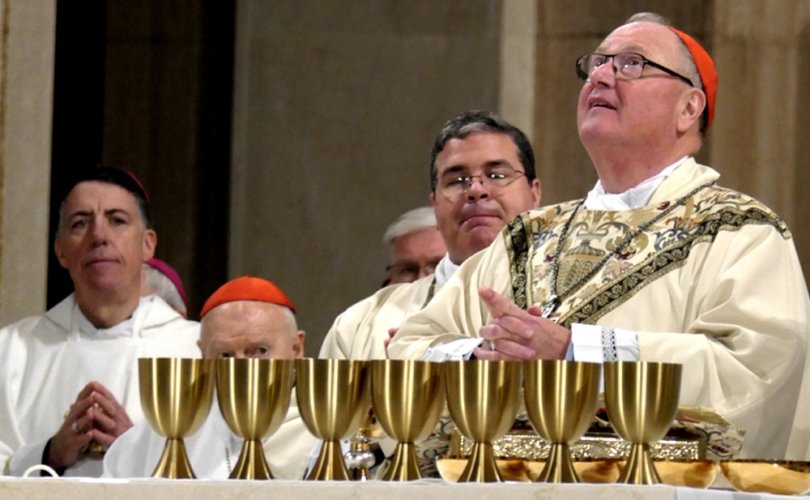 June 11, 2018 (LifeSiteNews) – The outgoing U.S. bishops’ pro-life chief Cardinal Timothy Dolan has said that the pro-life movement absolutely must make abortion illegal, rebuking Jesuit Father Thomas Reese’s recent suggestion that pro-lifers give up on that and promote contraception instead.

Contraception is the “lesser of two evils,” Reese argued.

“The contraceptive mandate of the Obama administration will do more to reduce the number of abortions than all of the legislative gimmicks of Republican legislators,” the elderly Jesuit wrote. “If European Catholic institutions can pay money into national health programs that perform abortions, then American Catholic employers can pay for insurance programs that pay for birth control.”

“If abortion is never going to be illegal, pro-lifers must consider voting for candidates, even pro-choice Democrats,” Reese wrote, claiming that Democrats “will reduce the number of abortions by supporting programs that help mothers and their children.”

One of Reese’s most troubling assertions is that contraception should be used to reduce abortions. In addition to rejecting the church’s teaching that contraception is itself morally flawed, and the fact that it can be medically harmful to women, his reasoning is questionable.

In reality, more than half of women seeking abortion were actually using contraception during the month they became pregnant, and studies have shown that once contraception is more widely available, abortion rates may actually rise!

Another reality is that some contraceptive drugs and devices may work by preventing the newly conceived embryo from implanting in the womb and surviving. It is difficult to claim that we can reduce abortions by promoting drugs that may sometimes induce an early abortion.

There is a host of evidence that suggests left-wing, big government policies do not reduce abortions. Rather, pro-life laws are very effective at cutting abortion numbers, as social scientist and professor Dr. Michael New has documented extensively.

Reese suggested that “increasing the minimum wage” and government handouts might be the best solution to child killing.

Reese’s article did not give credit to the thousands of non-government pro-life programs, resources, and organizations that help moms facing unplanned pregnancies.

The Democratic party’s 2016 platform advocated for taxpayer-funded abortions at home and abroad, overturning any state and federal restrictions on abortion, and called abortion “core” to people’s “health and well-being.”

It’s an “unnecessary dichotomy” to say the pro-life movement should give up “all efforts to legally protect unborn human life, and work only to reduce the number of abortions” through left-wing programs, Cardinal Dolan responded. “Catholic tradition and basic human rights teach us that every human being has an inalienable right to life that must be recognized and protected in law. While the law is not the only means of protecting life, it plays a key and decisive role in affecting both human behavior and thinking. We cannot give up!”

Dolan said he does agree with “some” of Reese’s suggestions for reducing abortions, but overall the Jesuit’s strategy is a “capitulation to the abortion culture, and a grave weakening of the powerful pro-life witness.”

Dolan also dismantled Reese’s claim that because certain polls indicate support for abortion, pro-life activists should essentially give up.

“Reese would rightly be disappointed, as would I, if pro-immigration reformers were to give up because polls discourage them,” Dolan noted. “We would lament if anti-capital punishment advocates in some states were to surrender because of polls showing their fellow citizens were not on their side. I expect he would laudably urge them to persevere. Why not pro-lifers?”

Reese also admitted, “while I would be happy to see Planned Parenthood put out of business, closing clinics that provide health care and birth control to women before replacements are up and running is irresponsible and counterproductive.”

Planned Parenthood, in addition to aborting over 300,000 babies annually, offers transgender hormones to minors and adults, encourages minors to look at pornography and try “pooping” on each other as part of “sexual exploration,” and has been caught covering up and ignoring sex trafficking and sex abuse.

Most Planned Parenthood facilities do not offer any prenatal care, and will only perform an ultrasound if it’s part of an abortion.