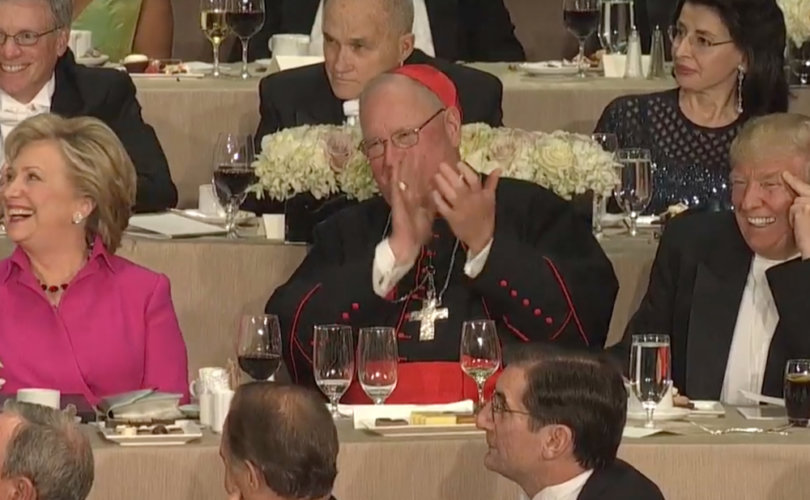 NEW YORK, October 31, 2016 (LifeSiteNews) – Despite ongoing calls to end the Al Smith dinner, or at least the tradition of allowing political candidates to speak, New York Cardinal Timothy Dolan is not backing down.

Catholics have long decried the platform it gives to pro-abortion candidates, but aside from photo ops, this year’s event personified polarization. The only difference from previous years were questions about the suitability of both candidates to appear in a Catholic venue.

Still, in the face of ample media reports on the evening’s tense and awkward tone, Cardinal Dolan persists in his belief that the Alfred E. Smith Foundation Memorial Dinner is an example of the Catholic Church bringing adversaries together. Those who disagree, however, were repelled by the whole display and how the event has come to reflect on the Catholic Church.

“The event is great and nothing can ruin the event,” Cardinal Dolan stated last week on his radio show. “In my mind, it’s America and the church at their best.”

As president of the Board of Directors of the Alfred E. Smith Memorial Foundation, Cardinal Dolan has the final say on anything to do with the $3,000 per-plate dinner.

His comments also came despite his having said this year’s dinner “maybe let us down a bit,” according to CRUX, and having earlier called his seat between Hillary Clinton and Donald Trump and wife Melania, “the iciest place on the planet.”

The calls to end the dinner hit a crescendo after last week’s dinner. The rancor between the candidates was palpable. The polarization prompted hostility from some in the audience, even though, as Dolan insists, the dinner is supposed to be about “light humor and political savvy” while aiming to offer some respite from an intense presidential campaign.

CatholicCulture.org News Director Phil Lawler called for the dinner’s end in a column, saying it sends the wrong message.

“The implicit message is that although we may differ on some superficial issues, deep down we’re all friends who agree on the really important issues,” Lawler wrote. “Well, frankly, we aren’t.”

He pondered another problem with the images broadcast from the dinner, “apart from the confusing and even disturbing political messages sent out by the annual event.”

“Millions of Americans saw the pictures of the Archbishop of New York flanked by the two presidential candidates,” he said. “Surrounding them, they saw dozens of wealthy corporate executives in white ties, seated in tiers at a swanky New York hotel.”

“Is this the image of Catholicism that we want to send out to the world,” Lawler asked, “the image of a comfortable Church, living in luxury, at ease with the workings of the Establishment?”

Lawler was joined by Catholic author George Weigel at First Things, where he denounced the appearance of Trump and Clinton.

“There they were on October 20, sharing the dais at the Al Smith Dinner, as if their profound differences with the Catholic Church in matters of moral sensibility and moral judgment were small beer,” Weigel wrote.

He called the evening’s spectacle “demeaning.”

“And it’s a self-inflicted wound,” Weigel said. “In a city as awash in money as New York, there are any number of ways to raise needed funds for at-risk kids other than this charade of bonhomie, in which the candidates pretend to be witty by reading jokes written by others.”

“Once, the Al Smith Dinner contributed to breaking down anti-Catholic prejudices,” Weigel continued. “Now, its tribalism and its seeming indifference to grave moral issues are an impediment to the New Evangelization.”

“The Al Smith Dinner has become the Al Smith Embarrassment,” Weigel concluded. “It’s time to give thanks for what it once did — and then give it a decent burial.”

Lawler commented in a later column that readers had responded positively to both his column and Weigel’s post on the dinner, questioning Cardinal Dolan’s assessment that the event showed America and the Church “at their best.”

“It’s inconceivable (isn’t it?) that a Catholic archbishop would think the Church is at her best in a fundraising event — and not, say, in the Eucharistic liturgy,” Lawler said. “That can’t possibly be what Cardinal Dolan meant.”

Lawler endeavored to explain how perhaps the cardinal intended to say the dinner is a time when the Church and state work best together, that the relationship between the nation and the Church is healthy when the candidates come to make jokes together for “the amusement of a white-tie audience.”

“Yet even that seems manifestly absurd,” he wrote.

“Let me respectfully suggest that the opposite is true: that the Al Smith dinner has come to represent the very worst sort of interaction between the Catholic Church and the American political system,” Lawler said. “Church leaders are seen on cozy terms with the rich and powerful, willing to paper over serious differences on moral issues for the sake of an evening’s entertainment (and, let’s not forget, a fundraising windfall).

Lawler also questioned the likelihood whether there was anyone who’d seen a photo or video of the event and as a result would feel called to join the Church.

“What is the point of this event?” he asked. “Why is the New York archdiocese playing any role at all in a partisan political contest?”

The Al Smith dinner is named for the late former New York governor and first Catholic presidential candidate. The fundraiser for Catholic Charities in the Archdiocese of New York features high-profile guests and the joint appearances by opposing presidential nominees in election years, the intent being for the candidates to lightly roast one another in humorous speeches while raising money for poor children in the New York archdiocese.

Critics have pointed out that having political candidates speak at the dinner violates the U.S. Bishops’ 2004 document Catholics in Political Life. It states:

The Catholic community and Catholic institutions should not honor those who act in defiance of our fundamental moral principles. They should not be given awards, honors or platforms that would suggest support for their actions.