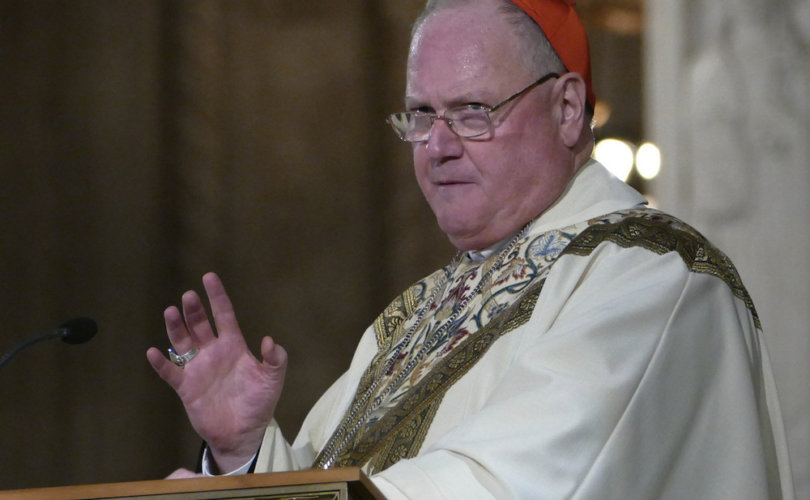 NEW YORK CITY, April 2, 2019 (LifeSiteNews) – Cardinal Timothy Dolan of New York suspended a priest in his archdiocese who has been accused of embezzling hundreds of thousands of dollars.

Fr. Peter Miqueli resigned in 2016 after parishioners filed a lawsuit charging that he had embezzled almost $1 million to pay for narcotics and the services of a male prostitute, Keith Crist.

According to Catholic New York — the archdiocesan newspaper — Miqueli has since been suspended. The newspaper reported that he is “prohibited from celebrating Mass and administering ‘any and all' Church sacraments, either publicly or privately, and also faces other associated restrictions.” Cardinal Dolan signed the suspension decree on March 19, more than two years after the widely reported scandal was reported in the media.

Miqueli was ordained in 1991 and had assignments at parishes in Staten Island and Yonkers. His most recent assignment was to St. Frances de Chantal, from which he resigned.

According to the March 28 announcement in the diocesan newspaper, Miqueli violated the terms of a 2016 decree. It was then that Cardinal Dolan, the archbishop of New York, ordered the errant priest to “avoid and and all persons or situations that could endanger your obligation to perpetual continence or any and all conduct that could that might cause scandal to the faithful or that would receive publicity in the media … .”

Having “wantonly disobeyed this provision of the precept,” the recent statement recommended that Miqueli seek “voluntary laicization.” Failure to obey the decree, it said, “is punishable by an additional penalty, not excluding dismissal from the clerical state.” The announcement did not specify exactly how Miqueli violated the decree.

According to the New York Post, Miqueli was spotted by neighbors in January at his residence in New Jersey and that Crist was also seen there.

Last week, Church Militant reported that Dolan refused independent investigator Barbara Jones’ recommendation that he immediately remove problem priests. According to the report, the cardinal hired Jones in 2018 to investigate how the archdiocese handled sex abuse claims. She later recommended that he remove faculties from as many as eight priests because of allegations of sexual misconduct. Reportedly, Dolan did not act on the recommendations, preferring to wait until June, which is when many priests are reassigned.

According to Church Militant, Miqueli went to the Bronx parish of Our Lady of Consolation after his resignation in 2016. The outlet noted that its sources confirm he spent time at The Guesthouse, a rehabilitation center for Catholic priests and religious experiencing various forms of addiction. The Guesthouse is located in what was the mansion of the wealthy Scripps family, near Detroit.

Several of Miqueli’s former parishioners at St. Frances de Chantal filed a lawsuit against him and Cardinal Dolan. Seeking to “rectify a decade-long million dollar embezzlement scheme” by Miqueli, the lawsuit charged that he used his position “as a man of God” to misappropriate and divert to his own use hundreds of thousands of dollars in donations from parishioners at St. Frances de Chantal and a parish on Roosevelt Island. The lawsuit charged that he used the money to buy a house in New Jersey, foreign travel, narcotics and “weekly services of his ‘sex master’ Keith Crist.”

Also party to the lawsuit is Cardinal Dolan, who it claims had failed to stop “Miqueli’s scheme.” It said, “This lawsuit seeks to finally put an end to this truly sinful conduct so that the St. Frances De Chantal Parish can regain the strength, spirituality, and faith it once had before Father Miqueli arrived.” Parishioners established a website in 2014 to voice their concerns about Miqueli and demand his resignation.

According to a letter to St. Frances of Chantal parish from Bishop Gerald T. Walsh, the Bronx District Attorney's Office completed an investigation of finances at the parish. The probe determined, according to the letter, that “$22,450.89 of personal expenses were improperly obtained” and “outside of Archdiocesan policies and procedures.” Indicating that these were Miqueli’s personal expenses, the letter called for the money to be repaid.

While Miqueli was entitled to a sustenance stipend in lieu of salary during his time out, the restitution of the missing money was to come out of that sustenance allowance. The District Attorney's Office, while it made a number of recommendations for the handling of the parish accounts, the criminal investigation into Miqueli’s financial dealings was concluded.