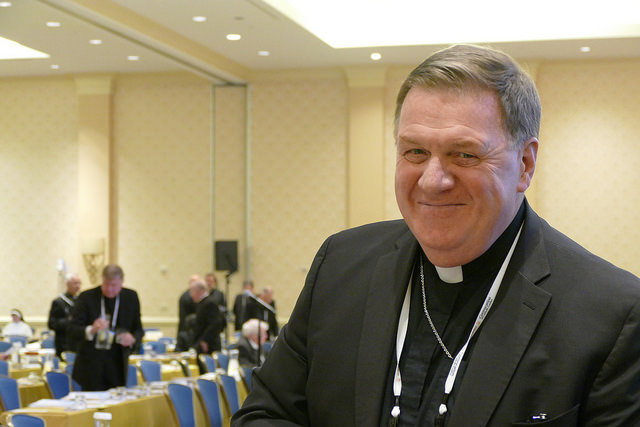 Tobin, recently named to become the archbishop of Newark, told The Tablet before the consistory last week that the cardinals' concerns about Amoris Laetitia are “at best naive” and hinted that they might be comparable to the Arian heresy of the fourth century.

The most recent concerns about Amoris Laetitia, which some progressives interpret to contradict Catholic doctrine by seemingly giving permission for the divorced and remarried to receive Holy Communion, came from Cardinals Raymond Burke, Joachim Meisner, Walter Brandmüller, and Carlo Caffarra. Their dubia, or formal request, for clarification went unanswered by the pope for two months. The cardinals then went public with it.

Burke has said the cardinals are contemplating a “formal correction” if their concerns remain unanswered.

Although Pope Francis still hasn't officially responded, he admonished the “legalism” of Amoris Laetitia critics in an interview and said he wasn't “losing sleep” over the matter. EWTN's Edward Pentin says a Vatican source told him the pope is “boiling with rage” over the criticism.

Tobin told The Tablet, “Amoris Laetitia cannot simply be reduced to a question of ‘yes or no’ in a specific pastoral situation. The Holy Father is capturing the work of two synods so if four cardinals say that two synods were wrong, or that somehow the Holy Father didn’t reflect what was said in those synods, I think that should be questioned.”

“Reading the [synod] documents and knowing a little about the participants, I realize it was not easy but you are dealing with difficult pastoral questions,” Tobin continued. “Just to simply reduce it to a 'dubium', I think it is at best naive.”

Tobin also had strong words for the United States after its presidential election. He blasted the “distressing and shocking” “polarization in American society” that “always risks seeping into the Church as well.”

“One of the principle missions of the Church in the United States is to be an agent of healing that promotes the common good, and unity in diversity,” he said. “That’s always been a hallmark of the American Church, because American Catholics all came from some place else. If we forgot that as American Catholics, on the day of judgment it will not be Jesus who condemns us, it will be our grandparents, because we forgot…In the wake of that election I feel the mission of the Church is even more crucial, not simply to be faithful to the Gospel but to help our nation preserve the best of its traditions.”

Tobin is one of three American bishops made cardinals on the weekend. The other two are Cardinal Blase Cupich, archbishop of Chicago, and Cardinal Kevin Farrell, prefect of the Vatican's newly-created Dicastery for Laity, Family, and Life.

At the U.S. bishops' meeting earlier this week, Tobin asked his brother bishops if their new three-year strategic plan is focused enough on environmentalism. He worried that the Trump administration won't focus enough on protecting the environment, making the issue “more urgent than ever.”