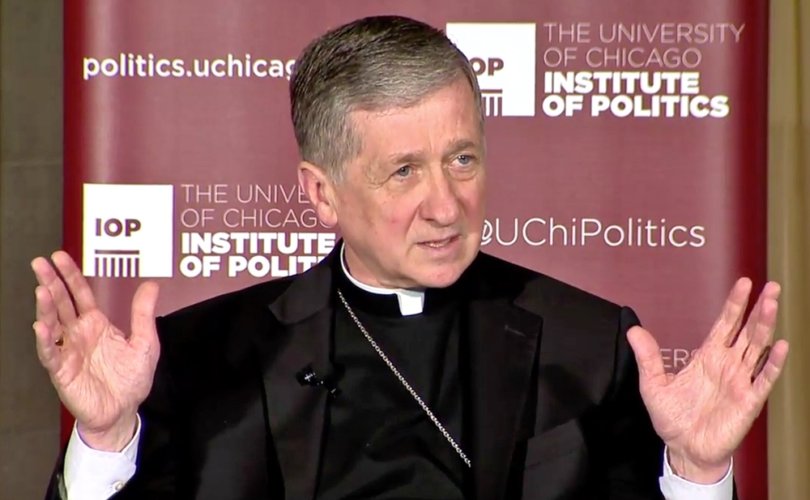 December 4, 2017 (LifeSiteNews) — When Cardinal Blase Cupich says he wants Catholics to graduate from “an adolescent spirituality into an adult spirituality” where they will be able to use their “freedom of conscience” to “discern truth” in their lives, he’s abandoning his own responsibility as shepherd, commented a Catholic journalist in a recent article.

Matthew Schmitz, a senior editor for First Things, recently critiqued the Archbishop of Chicago in an article titled “A Cool Cardinal.” He takes issue with Cupich’s insistence that Catholics must behave “like adults” and be treated “like adults.” Schmitz believes the phrase points to the archbishop’s wish to leave thorny moral questions to lay consciences to determine right from wrong.

Schmitz writes:  “Some people have a quaint idea that a bishop should say what is right and wrong, in season and out, but Cupich has evolved beyond this. Cupich wants to liberate Catholic consciences from clerical control. ‘If people come to a decision in good conscience,’ [Cupich] says, ‘our job is to help them move forward and to respect that.’ If you’re okay, so is he.”

The writer likens Cupich to the “cool dad” who leaves a courting couple alone or hints that he doesn’t count his beer bottles. This kind of father, who prefers to be a pal, “told us to act like adults so he didn’t have to.”

Cupich uses Amoris Laetitia to justify shoving responsibility onto lay consciences, says Schmitz. The writer takes issue with a presentation at the recent Boston College conference on Amoris co-hosted by Cupich, where a speaker linked episcopal authority, or “infantilization of the laity,” to a “colonization of the conscience.” That connection, Schmitz suspects, serves to free episcopal office from episcopal responsibility:

“If bishops no longer exercise real authority over Catholic consciences, the faithful are of course free to do as they please,” he writes. “But so are the bishops. They no longer have to worry if their spiritual charges are blithe about abortion, adultery, and sacrilege. Those very words, with their antique and judgmental shadings, begin to sound foreign to the refinement of the episcopal office. Dialogue is more pleasant than polarization.”

Pius X’s Vehementer Nos, which defends clerical authority, came in for a kicking at the conference and so Schmitz puts it in its historical perspective. When an anti-clerical government moved against the Church in France, Pius X recognized that a non-hierarchical Church would be dominated by the world. Now Schmitz says the failure of American bishops to lead has not liberated Catholics but left them “enslaved to state, market, and tribe.”

Meanwhile, as empty seats in parishes attest, Cupich’s attempts to be a “cool dad” by embracing such pop culture authorities as actor Mark Wahlberg are failing, Schmitz argues. Worse, he accuses the Cardinal of being cool in another sense: “indifference.”

“He pretends to be a friend to people who need a father,” says Schmitz. “Instead of watching over, he looks away.”