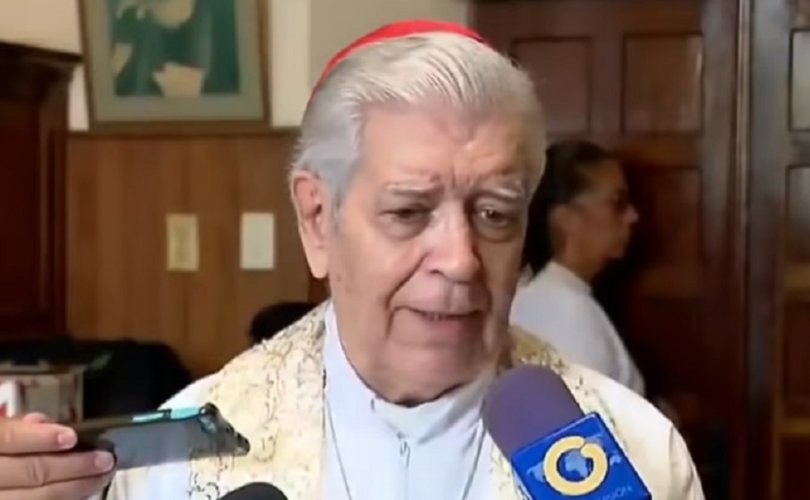 CARACAS, October 21, 2019 (LifeSiteNews) — Venezuelan cardinal Jorge Urosa Savino, archbishop emeritus of Caracas, said that “syncretism” evident at a “pagan” ceremony witnessed by Pope Francis at the Vatican should have been “avoided entirely.”

Syncretism is the incorporation of non-Christian rituals and beliefs into authentic Catholicism.

While reaffirming that the primary mission of the Catholic Church is to proclaim the gospel of Jesus Christ, Cardinal Urosa referred to the Amazonian rituals that occurred at the Vatican gardens to kick off the Synod of the Amazon. As the pope observed, at least one Catholic priest joined several indigenous people who prostrated themselves during the ceremony before the wooden image of Pachamama, a fertility goddess worshipped by indigenous Amazonians. According to CNA, Cardinal Urosa commented, “The syncretism evident in the ritual celebrated around an immense floor covering, directed by an Amazonian woman and in front of several ambiguous and unidentified images in the Vatican gardens this past October 4, should be avoided.”

The cardinal said it is regrettable that, despite numerous criticisms, organizers of the event have not explained the significance of the ritual. He wrote that “the reason for the criticism is precisely because of the primitive nature and pagan appearance of the ceremony and the absence of openly Catholic symbols, gestures and prayers during the various gestures, dances and prostrations of that surprising ritual.” The cardinal wrote, “This type of syncretism should be avoided entirely. The liturgy of the Roman Latin rite, especially of the Holy Eucharist, is offered to God alone: simple, somber, austere, and easy to understand by those who have received an appropriate initiation. An eventual Amazonian rite should respect the sacred nature of the Eucharist and preserve its basic elements. Other gestures may be introduced, but not such non-Catholic animistic or naturalistic gestures.”

The Amazonia Synod has brought together bishops, priests, and religious, as well as laity, from South America to the Vatican. It continues until October 27, having stirred controversy because of its working document (instrumentum laboris) and proposals to create a permanent diaconate for women in the Amazonian region, and allow the ordination of “viri probati” — mature married men — supposedly to reduce a shortage of priests in the remotest parts of the region. Among the proposals aired during the synod is the possibility of adding an Amazonian rite to the several historic rites already part of the Catholic Church.

Critics fear that an Amazonian rite would incorporate various non-Christian elements and rituals from South American indigenous religions in an effort to create a church “with an Amazonian face.” Cardinal Raymond Burke, among others, has deplored elements of the instrumentum laboris, which set the agenda for the synod, that he believes are heretical and give evidence of apostasy.

Cardinal Urosa wrote: “Along these lines, one will have to focus carefully on the possible Amazonian-indigenous rite that the synod may suggest. In the Church, there are many rites. Of course, it would have to be well prepared. And certainly, this possible Amazonian rite should avoid any type of strange or unwarranted syncretism.”

During the synod, images of Pachamama were also placed at the foot of the altar at Santa Maria in Traspontina in Rome. This came following a ritual that combined indigenous worship and a female dancer who brandished a copy of the Bible as she swayed before the altar at a ceremony at the outset of the synod.

Dr. Joseph Shaw of the Latin Mass Society of the U.K. wrote of the dangers of syncretism:

Such a combination of Catholic and pagan elements is called ‘syncretism’, and it has been relentlessly condemned by the Church, from the earliest days right up to the magisterial documents about ‘inculturation’ from Pope John Paul II and Pope Benedict XVI. Certainly, elements of local cultures, and elements even of non-Christian spirituality, can be purified of anything contrary to the Gospel and incorporated into an authentic Christian life. But the worship of false deities — and this really should not need saying — is not an example of this.

LifeSiteNews reported on Monday that at least two persons entered Santa Maria in Traspontina and removed the offending statues and tossed them into the River Tiber, close to the Castel Sant’Angelo and near the Vatican.

Calling on the fathers of the synod to focus instead on evangelization, Urosa wrote:

Many indigenous communities are grateful for the social work done by Catholic missionaries, but they prefer the Protestant churches. One of the small circles made this clear. Regretfully, the instrumentum laboris did not study the causes for this stark reality. The proclaiming of Jesus Christ to the indigenous people should be fortified, and indigenous people should be invited to conversion and baptism so that they can receive the immense treasure of being children of God and members of the Church.

In effect: The Gospel of Jesus Christ should be proclaimed and inculturated! Clearly, this does not mean taking European or Western culture to the indigenous. It means offering Christ as the Saviour and Redeemer, friend and brother, along with his calls for changing one’s life, family, social relations, the world of economics, the rejection of idols, slavery, and the forces of the natural world. That the Gospel truly enter into their cultures. This is how to inculturate the Gospel.