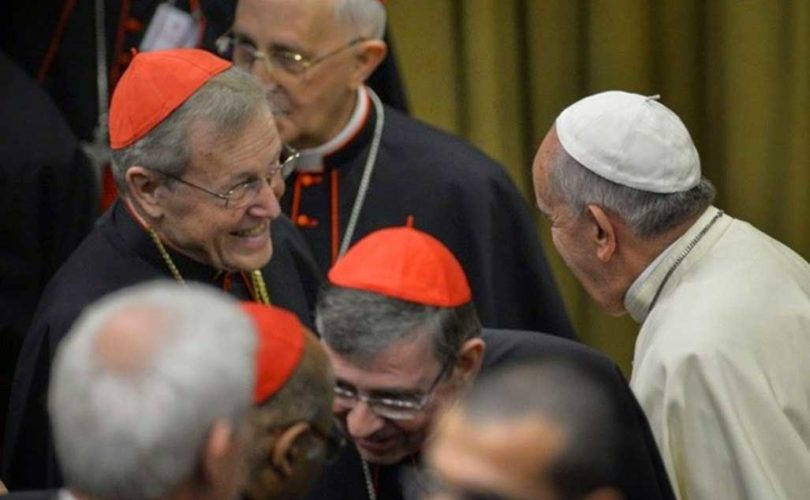 January 30, 2019 (LifeSiteNews) – Cardinal Walter Kasper – a close collaborator of Pope Francis – has expressed concern over a possible attempt at removing the current Pope from office but makes it clear that “a forced resignation would be invalid.”

Regarding the resignation of Pope Benedict XVI, Kasper insists that it was done in “full freedom.” Cardinal Kasper had been part of the “Sankt Gallen Group,” which had wished for then-Cardinal Jorge Bergoglio's election back in 2005, rather than then-Cardinal Joseph Ratzinger's.

As LifeSiteNews has reported, Cardinal Kasper – the “father of Amoris Laetitia” – recently claimed in a January 8 interview with the German TV channel ARD that there is a sort of conspiracy taking place that wishes to remove Pope Francis from his Petrine office, and that the abuse crisis is being used for that purpose.

“There are people,” the German cardinal said, “who simply do not like this pontificate. They want to see it ended as soon as possible and then have, so to speak, a new conclave. And they also wish to prepare it, so that it ends according to their own ideas.”

Cardinal Kasper added that “it seems to me inappropriate to make use of this abuse scandal for this goal,” to turn “it into a discussion about Pope Francis.”

In a new January 19 interview with the Italian newspaper Il Fatto Quotidiano, Cardinal Kasper was challenged further by an interviewer about his January 8 claims concerning a possible “plot” against Pope Francis. Asked who is working on such a plot – a word Kasper himself did not use – the German prelate did not get specific but said: “The answer is to be found on the internet, on Catholic websites in Italian, German, English. … ” Asked what causes such “tension” and whether there are certain “dossiers” in circulation, Cardinal Kasper once more demurred, saying he is “doing theology” and does not have “access to such dossiers.”

Further relativizing his January 9 statements, Cardinal Kasper now explains that an “abuse of the abuse” occurs not only when using the clerical sex-abuse scandal for the purpose of undermining Pope Francis but also when others are using it as an instrument and a tool “for their agenda against celibacy.”

Asked whether he ever spoke with Pope Francis about such a possible plot, Cardinal Kasper responded by saying: “It is true that I stand on the side of the Pope, but there are only rare personal encounters. I do not use the expression 'plot.’ I have never spoken with him about it.”

Responding to an additional question on the topic of the resignation of a pope, the German prelate explained that, “according to the rules of the Church's law and the conditions set therein, a Pope can resign.” This, he said, “is a completely personal and free decision, which in reality has happened very rarely.” “A force resignation would be invalid,” Kasper added.

Kasper himself is “content” with this pope. “That is why I have not yet had a reason to reflect upon and discus such an improbable eventuality,” he explained.

Speaking about the resignation of Pope Benedict XVI, Kasper showed himself supportive of this step when he said: “I have known Benedict XVI for 55 years. I know that he reflected upon it and prayed about it for a long time, long before he made public his resignation of the Petrine Office. He explained – and I take it seriously – that he has done so in full freedom and for reasons that he presented in his declaration to the cardinals.” Praising this decisive step, Cardinal Kasper added: “It was a humble, generous, and courageous decision which deserves all respect.”

As Giuseppe Nardi reported at the time of Pope Benedict's resignation, Kasper then had given Benedict a warning not to try to influence the upcoming Conclave in 2013. In an interview with La Repubblica, the German cardinal said: “The danger is great that the Church's leadership will suffer under his (Benedict's) influence. This may not happen.” Kasper added that, since Benedict made his decision to resign, he has now to hold back and should not influence the “Church's leadership and Church politics.”

In the same interview, Kasper significantly pointed out that there should be new ways for “remarried” divorcees to have access to Holy Communion; he proposed more “collegiality” for the Catholic Church, as well as more “transparency.” Furthermore, the German prelate – who headed the Pontifical Council for Christian Unity until 2010 – claimed that one should be open to the idea that the new Pope might come from an unusual place: “We have to be open for everything, for every nationality and every geographical origin.”

As German journalist and Rome correspondent Paul Badde revealed recently in an interview with LifeSiteNews, Cardinal Kasper was among the cardinals who plotted, during the 2005 Conclave, against the election of Cardinal Joseph Ratzinger. Cardinal Joachim Meisner – who later became one of the four dubia cardinals – had been informed at that time by Badde and he fought this conspiracy during the Conclave by informing other cardinals about this plot. The result was that Cardinal Ratzinger became Pope Benedict XVI. This plot against Ratzinger, as it became later known, was organized by the so-called “Sankt Gallen Group.”

Another important aspect is that the spiritual father of this “Sankt Gallen Group,” Cardinal Carlo Martini, himself is said to have put pressure on Pope Benedict to resign. As La Stampa's Vatican Insider reported in 2015, the confessor of Cardinal Martini, Fr. Silvano Fausti, revealed that Cardinal Martini spoke with Benedict in June 2012, that “the time had come for him to resign because the Roman Curia seemed irreformable: 'it’s right now, one cannot do anything here.'”

The same Vatican Insider article also reported that Bergoglio already had a significant number of supporters during the 2005 Conclave that then elected Ratzinger.

However, as Austen Ivereigh revealed in his 2014 book, The Great Reformer, it was Cardinal Kasper who, together with Cardinal Cormac Murphy-O'Connor (another member of the Sankt Gallen Group, but he was then too advanced in age to participate in the Conclave), helped – as a “Team Bergoglio” – to promote the election of Jorge Bergoglio in 2013. (The Sankt Gallen Group officially stopped meeting in 2006, but the collaboration obviously continued.)

As Ivo Fürer – the Swiss bishop who hosted the meetings of the Sankt Gallen Group in Sankt Gallen until 2006  – stated in a press release in 2015: “The election of Pope Francis in 2013 (115 Cardinals) corresponded to the goals of the group in St. Gallen – it says so in the biography of Cardinal Danneels. This is being confirmed by Bishop Ivo Fürer who never hid his joy about the election of the Argentine.”

As Giuseppe Nardi commented in his own report on the above-mentioned new ARD and Il Fatto Quotidiano interviews with Cardinal Kasper: “The interviews show a certain nervousness which can be seen in connection with the recent abuse scandals and a dubious way of life of bishops and cardinals which have come to light in the recent 12 months and which, in different ways, do not show Pope Francis in the best light.” Nardi mentioned the Pope's seeming failure to address the problems of misconduct or abuse, as well as “his protecting potential offenders” and the fact that those involved bishops and cardinals “are close to Pope Francis.”

Nardi sees that there is now an attempt in defending Pope Francis by influential media and circles, such as The New York Times, that try to make out a sort of “conspiracy” against Pope Francis, as if there existed, so to speak, a “conservative secretive circle of Sankt Gallen.” “Of such, however,” says Nardi, “there are no signs.”

Nardi concluded: “Kasper's interventions show that, with the coming closer of the Abuse Summit (in Rome) at the end of February – which is being shadowed by new abuse scandals – the tension is increasing in the circles around the Pope.”