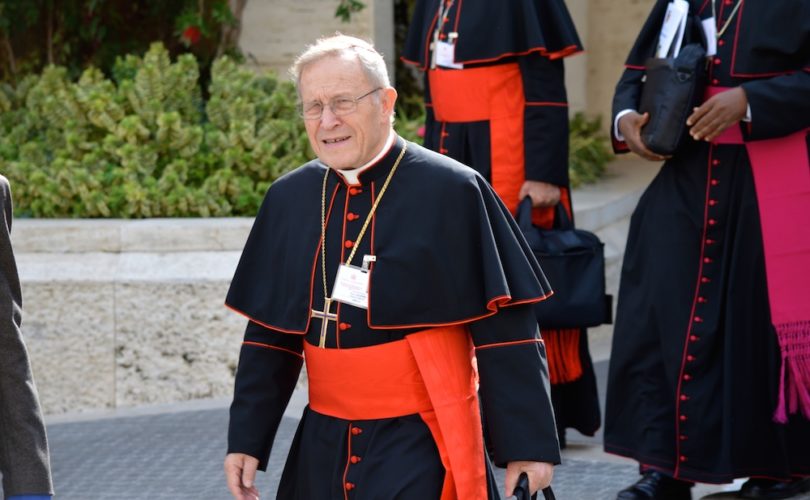 “Amoris Laetitia: Break or Beginning” is the title of a recent scientific article by Kasper in which he analyzes the post-synodal exhortation and provides his opinion on the right hermeneutic in reading it.

In the first part called “Discussion regarding the binding character,” Kasper critiques Cardinal Raymond Burke for his statement that post-synodal documents by the Pope are not necessarily binding. Instead, Kasper states, “This position is refuted by the formal character of an Apostolic Exhortation as well as its content.”

According to Kasper – and indeed he is right, as evidenced by the post-synodal discussions concerning the document – critiques of Amoris Laetitia boil down to the question of “remarried” divorced Catholics receiving Communion.

As Kasper points out, the question is addressed by two different camps: One opinion is held by “conservatives,” some of whom (including German philosopher Robert Spaemann) see Amoris Laetitia as a break from the tradition of the Church, whereas others (including Cardinal Gerhard Müller) say the publication does not change the position of the Church.

Another (held by Italian theologian Rocco Buttiglione) says the doctrine of the Church is developed further but not on the line of Pope John Paul II. Yet others acknowledge a “careful development” that is paired with a lack of “concrete guidelines.” The last position among the “conservatives” is Norbert Lüdecke (Canon Law, Bonn, Germany) who says it is up to the individual conscience of the remarried divorced person to decide if he or she may receive Communion or not.

Kasper goes on to cite Buttiglione that Cardinal Christoph Schönborn presents the “decisive interpretation.” This citation refers back to a publication in  L’Osservatore Romano. The same position is taken by Fr. Antonio Spadaro, SJ in La Civiltà Cattolica, among whom Kasper wants to count himself.

Kasper critiques the “alleged confusion” as having been caused by a “third party” who has “alienated themselves from the sense of faith and life of the people of God.” He continues to say that “behind the pastoral tone of the document lies a well thought-out theological position.”

The Cardinal praises the “realistic, open, and relaxed way of dealing with sexuality and eroticism” in Amoris Laetitia that does not seek to “indoctrinate or moralize.” “With a grain of salt, one can say that Amoris Laetitia distances itself from a primarily negative Augustinian view of sexuality and turns toward an affirming Thomistic view on creation.” Kasper repeats his opinion that the moral ideal is an “optimum,” yet is unreachable by many. “Oftentimes, we have to choose the lesser evil,” he states, “in the living life there is no black and white but only different nuances and shadings.”

“Amoris Laetitia does not change an iota of the teaching of the Church, yet it changes everything.” The text provides ground for believing – so says Kasper – that the Pope, and with him the Church, moves away from a “legal morality” and toward the “virtue morality” of Thomas Aquinas.

Afterward, the Cardinal presents his own complex interpretation of Thomistic teachings concerning virtue and moral law in concrete situations. He bases his opinion on prudence as the “application of a norm in a concrete situation.” “Prudence does not give foundation to the norm, it presupposes it,” Kasper writes. He draws the conclusion that the “norm” is not applicative mechanically in every situation, but prudence is needed as fits the case.

With reference to Familiaris Consortio (No. 84), Kasper states that “remarried” divorcees are not anymore punished with excommunication but instead are “invited to participate as living members of Church life.”

Instead of choosing the path of John Paul II and Benedict XVI (“who had adhered to John Paul II’s decision”) to not allow “remarried” divorced Catholics to receive Communion and instead to insist that they practice abstinence in their sexual relations, Pope Francis “goes a step further, by putting the problem in a process of an embracing pastoral [approach] of gradual integration.”

“Amoris Laetitia envisages which forms of exclusion from ecclesiastical, liturgical, pastoral, educational, and institutional services can be overcome,” Kasper explains. He posits that when John Paul II gave permission for remarried divorced to receive Communion – if they lived as brother and sister – this was “in fact a concession.” The Cardinal reasons this by saying, “Abstinence belongs to the most intimate sphere and does not abolish the objective contradiction of the ongoing bond of marriage of the first sacramental marriage and the second civil marriage.”

Kasper further denies the magisterial content of the provision: “This provision obviously does not have the same weight than the general norm; anyhow it is not a final binding magisterial statement.” In Kasper’s eyes, John Paul II’s request opens up a “playground” between the “dogmatic principle” and the “pastoral consequence,” which Amoris Laetitia tries to widen.

Another argument Kasper tries to use to justify allowing “remarried” divorcees to receive Communion is the distinction between “objective mortal sin” and “subjective culpability.” He insists that Pope Francis “emphasizes the subjective aspects without ignoring the objective elements.” Kasper also alludes to the fact that sometimes people are not able to be convinced of an “objective norm” because it seems to them to be “as insurmountably estranged from world and reality.”

“The conscience of many people is oftentimes blind and deaf to that which is presented to them as Divine Law. That is not a justification of their error, yet an understanding and mercifulness with the erroneous person.”

Therefore, Kasper states that “Amoris Laetitia lays the groundwork for a changed pastoral praxis in a reasoned individual case.” Yet he also says the “Papal document does not draw clear practical conclusions from these premises.” According to Kasper, the Pope leaves the question open, and the very fact of leaving it open is “in itself a magisterial decision of great consequence.”

Kasper explains that the direction of Pope Francis is clear: “One does not need to focus on footnotes. Much more important is that the gradual integration, which is the key topic in question, is directed essentially towards admittance to the Eucharist as full-form of the participation of the life of the Church.”

Kasper quotes Francis’ statement from an in-flight press conference on April 16 wherein he responded to the question if in some cases remarried divorced can receive Communion with the poignant words: “Yes. Period.” This answer is not found in Amoris Laetitia but ‘corresponds to the general ductus.’”

According to Kasper, this statement is in full accordance with Canon Law (915 CIC/1983) because it does not negate that “obstinacy to remain in mortal sin” can supposedly be judged in individual cases, and in some cases be excluded. It is even up for discussion whether an objective mortal sin is present in the given case.

He adds that the cause of scandal is not necessarily having a person who lives in a second civil marriage receive Communion. Rather, in such a situation, “not the admission but the denial of the sacraments is creating scandal.”