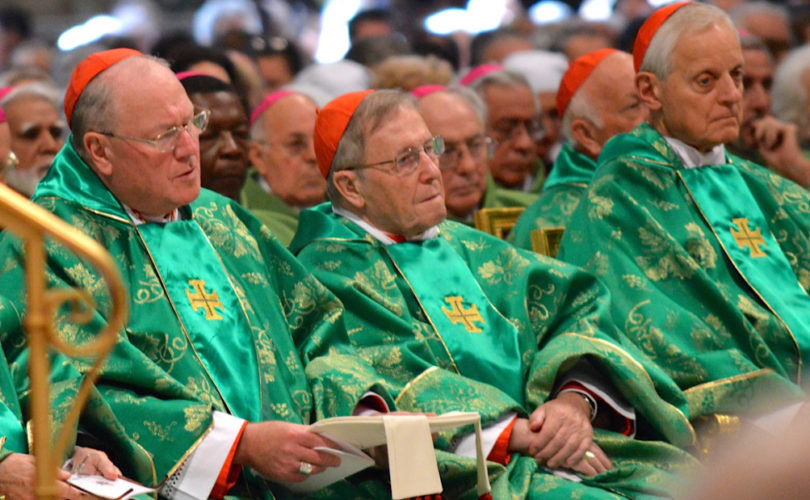 Cardinal Kasper (center) at the opening mass of the Vatican's Synod on the Family.John-Henry Westen / LifeSiteNews.com

While Cardinal Walter Kasper has issued an apology to the African bishops who may have been offended by comments he made in a controversial interview last week, the Catholic journalist behind the interview has told LifeSiteNews that the episode shows the power of social media in changing the dynamics of Vatican deliberations.

“If one of my observations was considered disparaging or insulting of Africans, then I’m truly sorry for that,” Kasper said today, according to the German language online magazine, Kath.net.

“This was and is not my intention and totally not my view. The fact that the culture of Africa in some respects is different from Europe, no one will deny. But I was far too often in Africa to not have witnessed the African culture, which I highly esteem.”

In the interview last Wednesday, Kasper had told Vatican journalist Edward Pentin that Africa “is totally different from the West… especially about gays.” When asked if African Synod Fathers are listened to on the subject, Kasper replied “no,” adding “they should not tell us too much what we have to do.”

The remarks were widely interpreted as dismissive of the African bishops’ contributions at the Synod on the Family.

Today’s qualified apology for the remarks follows an initial outright denial last week that he ever said the recorded comments. On Thursday, Kasper issued a statement saying he was “appalled” by his remarks as they were reported, saying, “I have never spoken this way about Africans and I never would.”

His interview with Pentin was the most talked-about topic in Rome, apart from the Extraordinary Synod of Bishops itself.

On Friday, after Pentin published the audio file of the interview on his website, Kasper again denied his comments and went further, accusing Pentin of bad journalistic practices, including recording him “secretly.”

Pentin, who has worked in Rome as a highly respected Vatican journalist for 12 years, published a statement in response to Kasper’s allegations. “I was simply doing my job as a reporter, following well established and acceptable journalistic practices,” he said. “I was with two other reporters and we all introduced ourselves as journalists, as can be heard on the audio of the exchange. At no point did His Eminence say he was speaking off the record.”

Pentin, who like most Vatican journalists writes for several different publications, added that he had approached Kasper as the cardinal was leaving the Synod meetings, and that his comments therefore were essentially an impromptu press conference, a normal practice in Vatican journalism. “It depends on the context, but normally in such a situation, comments are considered on the record unless otherwise requested,”  said Pentin.

Kath.net quotes Sean-Patrick Lovett, director of the English language section of Vatican Radio with whom Pentin worked when he first arrived in Rome over a decade ago, and Fr. Federico Lombardi, the head of the Vatican’s Press Office. Lovett praised Pentin as a “talented, sensitive and professional” journalist. Fr. Lombardi said, “I appreciate the seriousness and the balance of the work of Pentin.”

As of this writing, Zenit has not replaced the original interview, which they pulled from their website after Kasper’s initial denials, or issued any statement.

In an interview with LifeSiteNews on Friday morning, Pentin said that however difficult it was, the incident serves as a lesson in the power of social media and the Internet that has influenced the outcome of the Synod that closed on Sunday.

“It’s good for freedom. It helps to allow people to challenge the establishment,” he said.

Pentin said that the instant availability of information on the Internet, and the ability of the public to verify information, has been a game-changer, making it harder for special interest groups within the Vatican, even inside the Synod’s own administration, to manipulate its message. He cited the “instant uproar” on Twitter and Facebook following the release of the Synod’s mid-point Relatio on Monday as “really useful” in thwarting the plans to “steer” the Synod in a particular direction.

“They know they can’t get away with this kind of manipulation any more.” Social media, he said, “gives voice, probably for the first time to the silent majority. That silent majority has until now been so easy to ignore.”

Michael Voris of Church Militant TV, a service produced exclusively online, also told LifeSiteNews that mainstream secular journalists had frequently commented to him on the explosion of “conservative” Catholic news outlets in recent years. “They told me that until five years ago, they were the only ones here, so yes, the Internet has changed everything,” Voris said.

When Pentin started as a journalist in Rome in 2002, the world, he said, “didn’t have Twitter, YouTube or Facebook and no iPhones. It does have a way of uniting a group, doesn’t it, in a way that media didn’t before. It makes everything more participatory. Everyone can get a word in and have a say.”

In the last week of the Synod, Pentin was talked about in Rome due to his analysis that the Synod had been “engineered” by its own administrators in order to bring about the appearance of a change in the Church’s teaching or approach to sexual issues, including homosexuality. He argued that had it not been for the huge public scrutiny made possible by social media, those efforts would have gone unnoticed.

Pentin noted that Cardinal Lorenzo Baldisseri, the Synod’s secretary general and the individual who he said had emerged as the lynchpin of the efforts to control the Synod’s message, gave orders to the bishops that there was no Tweeting allowed of the remarks heard in the Synod hall.

“Zenit took the interview down, pretty quickly, but it was too late because everyone had tweeted it, it had got out on Facebook… There’s no pulling it back, once it’s out there, as [Durban’s Cardinal] Napier said.”

Pentin also commented on the “strangeness” of this Synod, saying he has covered five previous bishops’ synods: “This one is so different.” “With the subject matter, it’s so contentious, of course. But the other thing is the way it’s being steered. I’ve never known any synod to be steered like this one.”

Pentin said he had spoken to a “lay expert” participating in the Synod: “I asked him if the Synod was being controlled, and he said there is absolutely no doubt that it’s being engineered to a particular end, that of putting forward the same message as that in the Relatio” of greater acceptance of cohabiting and homosexual partnerings.

The Kasper/Pentin controversy last week hit the Church at a moment of intense international media scrutiny, since Kasper was the cardinal who, in February suggested that Catholic “pastoral practice” could be altered to allow divorced and remarried Catholics to receive communion in some circumstances. Kasper has spent the intervening months promoting the idea in media interviews. Cardinal Burke, who has been Kasper’s principal opponent in the media, told Catholic World Report in an interview that it was “profoundly sad and scandalous” that Kasper had made the remarks about the African bishops.

Burke called it “a further indication of the determination to manipulate the process of the Synod to advance Cardinal Kasper’s false positions, even by means of racist remarks about a significant and highly respected part of the Synod membership.”