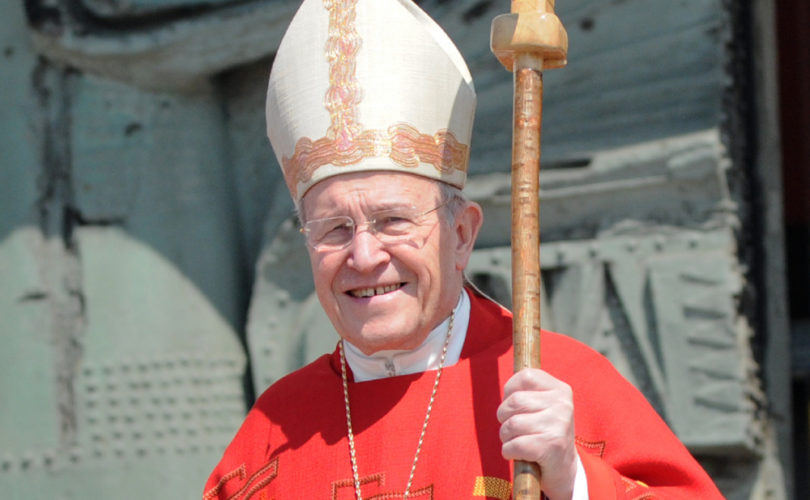 June 11, 2015 (LifeSiteNews) – In the face of increasing opposition to his plan to approve giving Holy Communion to people who are in adulterous remarriages, Cardinal Walter Kasper is hinting at a new “Vatican II” strategy for accomplishing his purposes at the upcoming Synod of Bishops in October, in which Catholic bishops from around the world will debate and vote upon his proposal.

In his televised interview with Raymond Arroyo of the Eternal World Television Network on June 4, Kasper acknowledged the opposition to his proposal of large numbers of bishops and even whole episcopal conferences, and recognized that inducing a large majority to support it would be difficult.  As a result he proposed a different approach.

“I get a lot of agreements, but also a lot of critiques, and there are tensions there,” Kasper acknowledged.  “Now I propose to those who prepare the Synod to prepare a text which can get the agreement of the whole, of the great majority. It’s the same method also we had in the Council.” He later repeated, “My suggestion is to find now a formula where the great majority can adhere.”

In the second part of his interview with Arroyo, which will air June 11 on EWTN, the cardinal admitted that he doesn’t have an “overwhelming majority” on his side and that more generally acceptable language will have to be sought to reach a consensus.

“I see something more differentiated because I know many bishops who have a different position, and bishops’ conferences,” he told Arroyo. “And so it is not, ah … perhaps there will be, but we must find the solution where everybody, or the great majority — the Pope wants a certain unanimity of the episcopate and now it cannot. It’s too easy, I think, to say it’s already an overwhelming majority, no.”

Kasper’s reference to the “Council,” is a shorthand expression meaning the Second Vatican Council, the Church’s last ecumenical council which was held from 1962 to 1965, and which resulted in revolutionary changes in virtually every aspect of the Church’s life.

The Second Vatican Council was also faced with challenges to traditional Catholic doctrine and practice, which were opposed by large numbers of bishops. Despite this opposition, many items on the agenda of the ultra-liberal French and German bishops, a faction known as the “Rhine Group” which was supported by Pope Paul VI, were accomplished by the use of often vague, ambiguous and even apparently conflicting language that seem to have appeased both sides. These expressions were later referred to as “time bombs” which some theologians were able to exploit following the council for the purpose of undermining the Church’s traditional teachings.

Kasper’s well-oiled organization also has the sympathy of the Supreme Pontiff, Pope Francis, although it appears to have been waning in recent months as opposition builds among the world’s bishops.  An excessively general or ambiguous statement by the October Synod could be used by German bishops and others who wish to rationalize the distribution of Holy Communion in the same way Vatican II’s text has been exploited by liberal theologians.

However, Kasper and the other German bishops promoting communion for adulterous divorcees may be losing hope of any compromise that can ultimately benefit their position.  The German bishops, a majority of whom support Kasper’s proposal, are already pushing ahead with plans to implement it, despite the explicit disapproval of the prefect of the Congregation for the Doctrine of the Faith, Cardinal Gerhard Ludwig Müller.

“The synod cannot prescribe in detail what we must do in Germany,” said Cardinal Reinhard Marx, archbishop of Munich and chairman of the German Bishops‘ Conference, during the episcopal conference’s spring meeting on February 24, according to the German newspaper Die Tagespost and translated by the blog Rorate Caeli.

“We are no subsidiaries of Rome,” he added. “Each conference of bishops is responsible for pastoral care in its culture, and must, as its most proper task, preach the Gospel on our own. We cannot wait for a synod to tell us how we have to shape pastoral care for marriage and family here.”