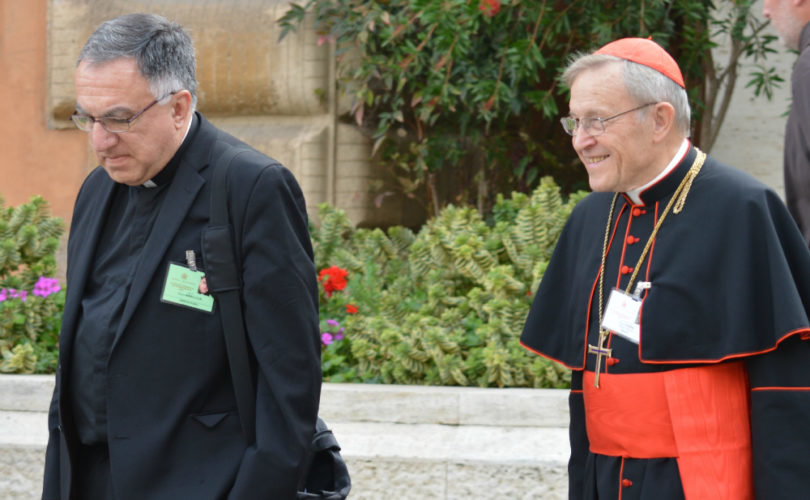 Kasper said this in an interview with Katholisch.de, the official website of the German bishops' conference. Dr. Maike Hickson at One Peter Five translated his remarks.

There is an “urgent need for action” on the question of married priests, Kasper said. Previous discussions on this topic were “not approved officially by Rome,” but now the pope is open to the question. Kasper noted Pope Francis hasn't said where he stands on this, but said he views the discussion “positively.”

“This discussion is very urgent” given the shortage of priests in Germany, according to Kasper. The entire country only has 40 candidates for the priesthood; in liberal Cardinal Reinhard Marx's archdiocese, there's only one.

Kasper hinted that Marx “wishes to push things ahead” regarding married priests, but “he cannot directly intervene” in every diocese.

The Catechism of the Catholic Church explains, “Called to consecrate themselves with undivided heart to the Lord and to 'the affairs of the Lord,' [priests] give themselves entirely to God and to men. Celibacy is a sign of this new life to the service of which the Church's minister is consecrated; accepted with a joyous heart celibacy radiantly proclaims the Reign of God” (CCC 1579).

Married men may already in some circumstances be ordained Catholic priests. For example, married men are allowed to be ordained in the Eastern churches. And, if a former Episcopal or Anglican priest has converted to Catholicism, there is a special pastoral provision that allows for him to become a Roman Catholic priest and remain married to his wife.

Nevertheless, “priestly celibacy is held in great honor in the Eastern Churches and many priests have freely chosen it for the sake of the Kingdom of God,” the Catechism continues. “In the East as in the West a man who has already received the sacrament of Holy Orders can no longer marry” (CCC 1580).

A number of married Roman Catholic priests, who began as priests of Protestant denominations, have said they don't think married priests should be the norm. They point out that parishes will have to suppot not only priests but also their (potentially very large) families. They also point out the difficulty of being a shepherd to “two flocks” – a parish and a family.

“You might be surprised to know most married Catholic priests are staunch advocates of clerical celibacy,” Father Joshua Whitfield, a Catholic priest with a wife and four kids, wrote recently in the Dallas Morning News.

“Laity who have no real idea of what priesthood entails and even some priests who have no real idea of what married family life entails both assume normalizing married priesthood would bring about a new, better age for the Catholic Church,” wrote Whitfield. “But it's an assumption with little supporting evidence. One need only look to the clergy shortage in many Protestant churches to see that opening up clerical ranks doesn't necessarily bring about spiritual renaissance or growth at all, the opposite being just as likely.”

“But more importantly, calls to change the discipline of celibacy are usually either ignorant or forgetful of what the church calls the 'spiritual fruit' of celibacy, something largely incomprehensible in this libertine age, but which is nonetheless still true and essential to the work of the church,” Whitfield continued.

Talk about celibacy but little mention of its pastoral end: “with an undivided heart you will be more freely at the service of God and man.”