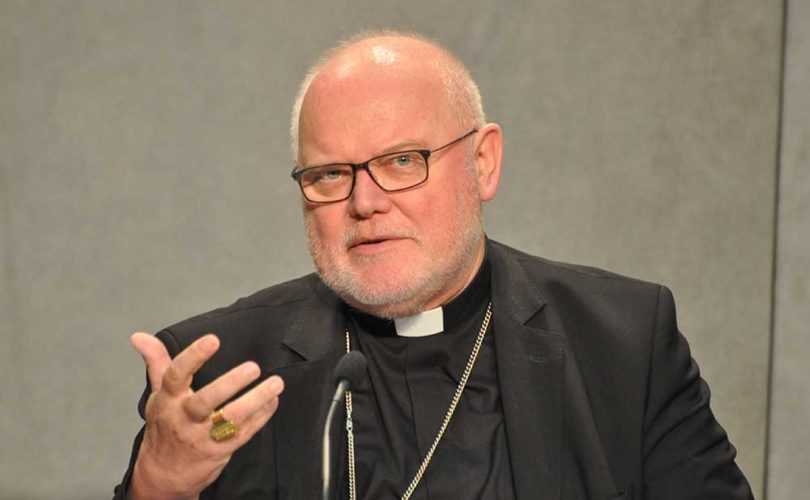 February 7, 2017 (LifeSiteNews) – German Cardinal Reinhard Marx said in a new interview that he thinks it's “very clear” that Amoris Laetitia allows Communion for remarried divorcees, and that Pope Francis intended it that way.

Speaking to the National Catholic Register's Ed Pentin on February 6, Marx said, “I think there is a clear position and the line of the Pope is very clear.”

The Catholic bishops of Germany just released guidelines for the implementation of Amoris Laetitia that say some Catholics in adulterous unions may receive Holy Communion. The German bishops, including Marx and Cardinal Walter Kasper, pushed for a radical change in sacramental practice at the two synods on the family that preceded Amoris Laetitia's publication.

The German bishops' guidelines are in stark contrast to the position of their countryman Cardinal Gerhard Müller, Prefect of the Congregation for the Doctrine of Faith. Cardinal Müller has strongly advocated that Amoris Laetitia cannot be used to justify a departure from Church Tradition on Communion for the divorced and remarried.

Amoris Laetitia must “clearly be interpreted in the light of the whole doctrine of the Church,” he told Il Timone. “It is not right that so many bishops are interpreting ‘Amoris Laetitia’ according to their way of understanding the Pope’s teaching. This does not keep to the line of Catholic doctrine.”

“Adultery is always a mortal sin and the bishops who create confusion about this must study the doctrine of the Church,” he said. “We have to help the sinner overcome sin and convert.”

The exhortation didn't settle the debate over sacramental practice and sacrilege. It has been used to justify Sacraments for divorced Catholics in unions the Church teaches are invalid. Other prelates have said it must be read through the lens of previous Church teaching on marriage, and therefore can in no way allow this.

The confusion and varying interpretations led four cardinals to send Pope Francis a dubia, or formal request, asking him to clarify whether Amoris Laetitia is in line with Catholic moral teaching. After he didn't respond, the cardinals made their concerns public. He still has yet to reply.

Marx told Pentin he “cannot understand” why there are other interpretations of Amoris Laetitia. “The answer is, I think, clear,” he said.

The new guidelines from the German bishops “underline…preparation for marriage, to go with the couples and to look at special situations of irregularity,” said Marx, and don't contain anything that's not in Amoris Laetitia.

Marx was recently part of a meeting with Pope Francis and the President of the Council of the Evangelical Church in Germany, Heinrich Bedford-Strohm. At this meeting, Bedford-Strohm pushed for intercommunion between Catholics and Lutherans.