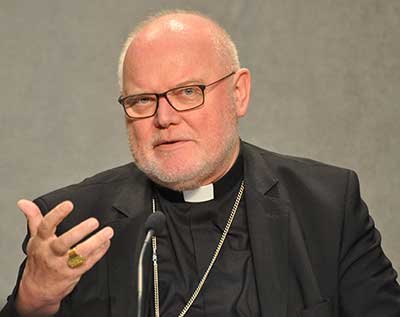 Reinhard Cardinal Marx told reporters last March that “We are not a subsidiary of Rome. The Synod cannot prescribe in detail what we should do in Germany.”Lisa Bourne/LifeSite

ROME, December 22, 2016 (LifeSiteNews) — Cardinal Reinhard Marx, archbishop of Munich and a member of Pope Francis’ Council of Cardinals, has reacted to the four Cardinals’ dubia by claiming Amoris Laetitia is “not as ambiguous as some people claim,” and that it does indeed allow Communion to the divorced and remarried in certain circumstances.

Cardinal Marx told the official website of the German Bishops’ Conference, Katholisch.de, in an interview published Wednesday that the exhortation is “not about a new teaching” but about a “new, pastoral view.”

“The document [Amoris] is not as ambiguous as some people claim. It is not about a new teaching. The pope wants that we look at reality with a new, pastoral view and that we connect our life – even if it did not always turn out well – with the demands of the Gospels and that we trust God’s mercy,” he said according to comments translated by Maike Hickson of OnePeterFive.com.

Marx outlined in the interview what he believes to be some of Pope Francis’ pastoral agenda for the Church, stating that it does indeed include allowing civilly divorced and remarried Catholics to receive Holy Communion according to the dictates of an individual’s conscience.

“It is important for the pastoral care to form and respect the decision of conscience of the individual person. For example, the remarried divorcees shall not — for the rest of their lives and independently of the path which they went — be locked up as in a dead end. Here one has carefully to look at the biographical, sometimes very difficult, situation of the individual person on the background of the Gospel. Part of it is then, too, under certain conditions, the possibility to be able to go again to Communion and to Confession,” he said.

He said that the German bishops support the pastoral agenda of the pope and consider Amoris Laetitia to be a “positive further development.”

“He first claims that there is ‘no new teaching,’ yet at the same time he says that some ‘remarried’ divorcees may now receive the Sacraments – a practice that has always been disallowed by the Catholic Church for 2,000 years,” she wrote.

The four Cardinals submitted five yes-or-no questions (dubia) in September to Pope Francis asking if his exhortation conforms to Catholic teaching on marriage, the sacraments, and conscience. When the pope did not respond, they went public with their concerns in November. They are now considering issuing a formal correction of the exhortation sometime in the the new year, according to Cardinal Raymond Burke, one of the dubia signers.