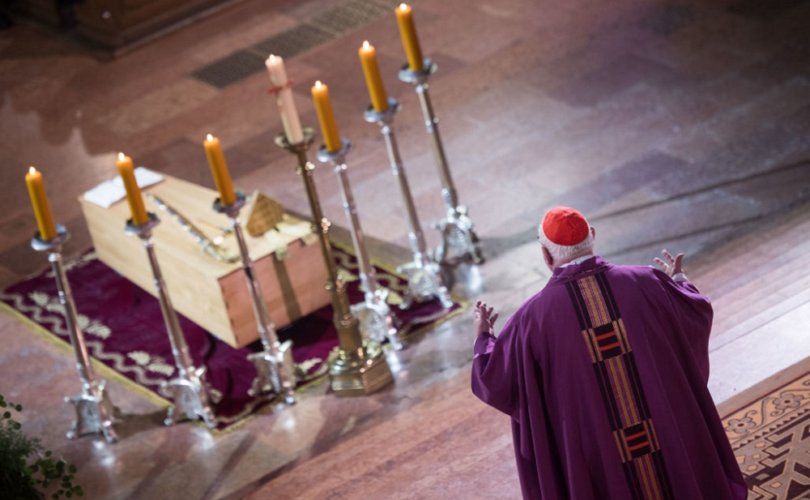 BONN, Germany, February 11, 2020 (LifeSiteNews) — In a surprise move, Cardinal Reinhard Marx has announced he will not be available for a second term as president of the German bishops’ conference. The archbishop of Munich declared, “I think it should be the younger generation’s turn.”

Marx has been, and still is, one of the most powerful bishops in Europe, if not the world. He was named archbishop of Munich and Freising, one of the two most prestigious dioceses in Germany, in 2007. Pope Benedict XVI made him a cardinal in 2010.

He became president of the German bishops’ conference in 2014. From 2012 until 2018, Marx was also president of the Commission of the Bishops’ Conferences of the European Community. The German cardinal is one of six members of Pope Francis’s exclusive Council of Cardinal Advisers, preparing for a reform of the Roman Curia.

In a press release, the German bishops’ conference quotes from a letter Cardinal Marx had written to the other bishops, explaining his decision to not pursue a second term as president of the organization.

“The year 2020 is progressing, and with it we glance at the agenda and the schedule for this and the coming year. This also applies to the commitments of the president of the German bishops’ conference. I therefore think it is right to make it clear even now, before the election of the president at the general assembly this spring, that I am not available for a possible second term of office.”

The German bishops’ conference meets twice a year for a general assembly. While the meeting in the fall always takes place in Fulda, where Saint Boniface, the apostle to the Germans, is buried, the spring assembly meets at various locations.

This year, the German bishops will meet in Mainz for four days, starting March 2. The new president will be elected on March 3.

The bishops are set to talk about the post-synodal apostolic exhortation “Querida Amazonia,” following the Amazon Synod. The document is scheduled to be published tomorrow, February 12. The other main point of discussion is the synodal path in Germany.

In his letter, Cardinal Marx said his decision had been made some time ago. “My consideration is that I would be 72 years old at the end of a possible second term of office, and then the end of my task as archbishop of Munich and Freising will also be near. I think it should be the younger generation’s turn.”

The cardinal also speculated that “perhaps it would be good if there were more frequent changes in this task.”

Before Marx, Archbishop Robert Zollitsch of Freiburg headed the German bishops’ conference for only one term. Zollitsch’s predecessor, Cardinal Karl Lehmann of Mainz, was its president for more than 20 years.

“I was very happy to serve as president of the German bishops’ conference, but ‘everything has its time,’” said Cardinal Marx.

He emphasized his continuing active involvement within the bishops’ conference and said he will be “particularly committed to the synodal path, which in my view has gotten off to a good start.”

At the same time, Marx admitted, “I would like to have a stronger presence again in the archdiocese of Munich and Freising, especially in the comprehensive strategy process which we want to begin this year.”

In 2019, Marx had met with 50 representatives from all the important panels of the archdiocese. During a conversation that lasted more than three hours, those present dealt with “the development of a personnel strategy for the year 2030, pastoral care concepts, leadership models for parish associations, and structural issues,” among other things. Out of this grew what Marx called a “comprehensive strategy process.”

LifeSiteNews has reported on Cardinal Marx’s many controversial actions and positions.

In 2019, LifeSiteNews reported that Cardinal Marx “fired back at the Vatican after it informed him the German bishops’ plans for a ‘binding synodal path’ are ‘not ecclesiologically valid.’”

Last December, the head of the German bishops’ conference stated in an interview that homosexuals belong to the Church’s “sacramental community.” He also defended a “blessing” for homosexual couples.

Last month, John-Henry Westen of LifeSiteNews joined other Catholic leaders in a prayerful protest outside the offices of Cardinal Marx in Munich. A coalition of lay Catholics, called Acies Ordinata, prayed in firm protest against the German bishops’ conference and its president, as LifeSiteNews wrote at the time.

On this occasion, Archbishop Carlo Maria Viganò came out into the public for the first time after publishing his testimony implicating Pope Francis in the cover-up of the sexual abuse perpetrated by Cardinal Theodore McCarrick, who was later dismissed from the clerical state.

The unwillingness of Cardinal Marx to be available for a second term as president of the German bishops’ conference has caught everybody by surprise. The Catholic news website run by the German bishops spoke of a bombshell.

In a first reaction, Thomas Sternberg, head of the Central Committee of German Catholics, said, “We thank Cardinal Reinhard Marx for his convincing emphasis on an ecumenical Church that is oriented toward the world. For him, democratic consciousness and the Catholic Church are not opposites.”

The synodal path in Germany has been organized by both the German bishops’ conference and the Central Committee of German Catholics.