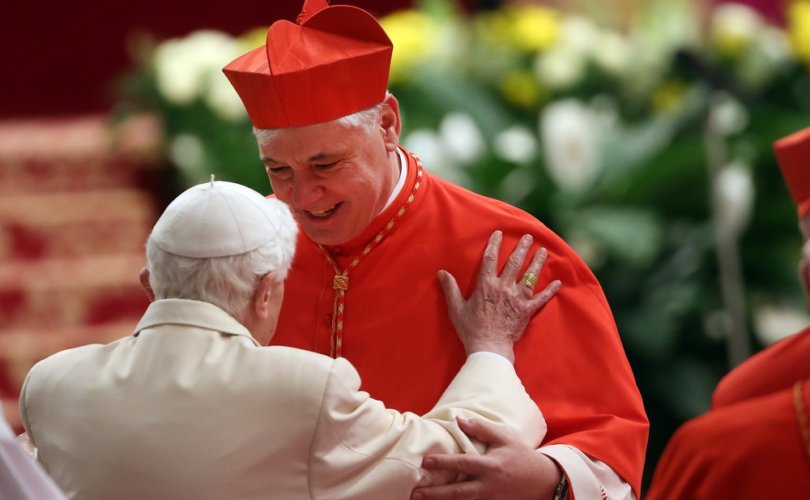 ROME, January 17, 2020 (LifeSiteNews) — Benedict XVI said he could not remain silent in his new book because he sees the voices of those who wish to abolish priestly celibacy as a “great danger” for the Church, Cardinal Gerhard Müller has said.

In a recent interview with Corriere della Sera, the former prefect of the Congregation for the Doctrine of the Faith (CDF) added that while “some are putting pressure on Francis,” the “contribution” of Benedict’s new book with Cardinal Sarah is “a help to the Pope.”

The new volume, titled From the Depths of Our Hearts, “has a theological and ecclesiastical value greater than that of many other bishops and theologians,” Cardinal Müller said.

The cardinal’s comments were given to Corriere but were edited out of the printed edition for reasons of length. The cardinal, however, provided LifeSiteNews with the full text.

Elaborating on the “danger” Benedict sees, the cardinal pointed to forces within the Church that are ready to use the Amazon Synod to weaken the Catholic priesthood.

“The Synod discussed the possibility of ordaining married men, but the Amazonian bishops represent only a small part of the world episcopate,” the cardinal told Corriere. “The Catholic priesthood is at stake here. Some, as in Germany, are beginning to say: why not elsewhere? If you destroy a principle, then everything falls.”

This principle, he said, is the truth of the Catholic priesthood.

“We Catholics are not like Protestants who see the ministry only as a function in the Church. Priests for us are representatives of Jesus Christ, the Good Shepherd and High Priest,” he explained.

Cardinal Müller was appointed prefect of the Congregation for the Doctrine of the Faith in 2012 by Pope Benedict XVI and is the editor of Joseph Ratzinger’s opera omnia. In July 2017, Pope Francis replaced the 72-year-old German prelate with Spanish Jesuit theologian Luis Ladaria as prefect of the CDF.

In his interview with Corriere, Cardinal Müller made clear he has no concerns about the new book causing any “confusion between the magisteriums” of Francis and the Pope emeritus.

“We don’t have two popes, there is only one pope, Francis,” he said. “We say ‘pope emeritus’ as a form of courtesy,” but “in reality, Benedict XVI is a bishop emeritus.”

The cardinal said that those who see the new book by Benedict XVI and Cardinal Sarah as a “sort of interference” forget that while the Roman Pontiff is the “principle of unity in the Church … all bishops, even emeriti, participate as such in the Magisterium of the Church together have the responsibility for the depositum fidei.”

Pressed on two common issues posed by those who advocate a relaxing of celibacy in the Latin Rite — i.e. married priests in the Eastern Churches and the ordination of former Anglican clergy — Cardinal Müller stressed “they are exceptions, in the name of the superior value of the unity of the Church.” But he added: “it does not mean abolishing the principle.”

In 1980, Pope John Paul II authorized what is called the “Pastoral Provision,” enabling bishops to ordain former Anglican clergy as diocesan priests, once they received a dispensation from the Holy See regarding celibacy. In his 2009 apostolic constitution,  Anglicanorum caetibus, Pope Benedict XVI authorized a similar provision within a new Anglican Ordinariate that he established with this document.

When asked how he explains the storm of controversy surrounding Benedict XVI’s new book with Cardinal Sarah, Cardinal Müller pointed to rampant “opportunism.”

“When Ratzinger was Pope,” the cardinal observed, “many people came to visit him and they adored him. Now they don’t visit him, they don’t listen to him, they even manage to slow down the publication of his works in Italian.”

“The opportunists are always the greatest enemies of the credibility of the Church,” he said.