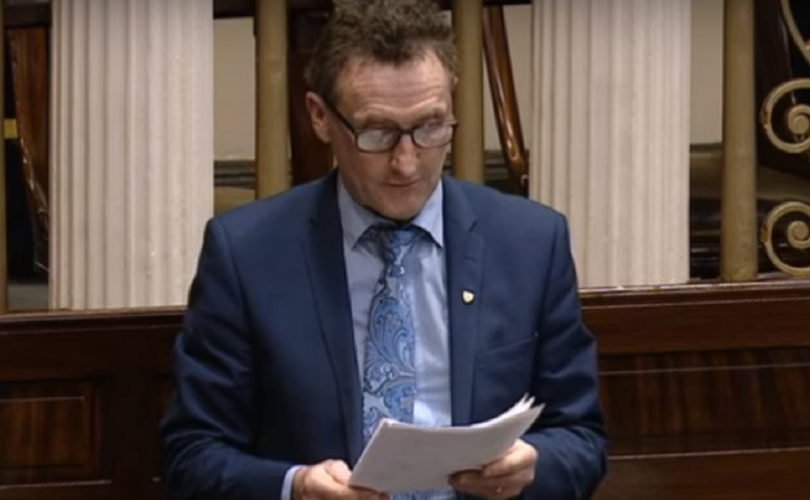 October 3, 2018 (LifeSiteNews) – Cardinal Gerhard Müller has confirmed that the Vatican investigation into sexual abuse by Cardinal Cormac Murphy-O’Connor was not completed, but instead was stopped for lack of the Pope’s approval.

The cardinal spoke with LifeSiteNews yesterday in Washington, D.C. while there to speak at the Napa Institute’s Conference on Authentic Catholic Reform.

Cardinal Müller told LifeSiteNews he was “bound by Pontifical Secret,” but said that “the Pope’s approval is required for investigations” of a Cardinal. LifeSiteNews informed Müller that some news reports were suggesting he had completed the investigation, rather than the investigation having been interrupted and prevented from continuing.

LifeSiteNews asked the cardinal if he would at least go on the record to indicate that the investigation was stopped, rather than completed, and he agreed, “yes.”

‘The Pope wants to speak to you’

Despite suggestions to the contrary, neither LifeSiteNews nor Archbishop Carlo Maria Viganò claimed that Cardinal Murphy-O’Connor was guilty of the abuse. Rather, LifeSite’s original report focused on the fact that the investigation into the allegations did not follow proper Church protocol, and Archbishop Viganò mentioned the halting of the investigation in the context of the Pope’s larger record on sex abuse cover-up.

The bizarre circumstances around the Pope stopping the investigation were revealed by famed Vatican reporter Marco Tosatti. From a source close to Cardinal Müller, Tosatti learned that the Cardinal, when he was Prefect of the CDF, was interrupted by a phone call from the Pope while saying Mass in June 2013 at the Church of Santa Monica (next to the CDF building) for a small group of German students.

As Tosatti put it in an article for First Things last year:

His secretary joined him at the altar: “The pope wants to speak to you.” “Did you tell him I am celebrating Mass?” asked Müller. “Yes,” said the secretary, “but he says he does not mind—he wants to talk to you all the same.” The cardinal went to the sacristy. The pope, in a very bad mood, gave him some orders about a dossier concerning one of his friends, a cardinal.

In a joint report with LifeSiteNews last week, Tosatti revealed for the first time, via a source close to Cardinal Müller, that it was the CDF’s investigation of Cardinal Murphy-O’Connor that Pope Francis nixed during that urgent phone call.

The allegation, and failed investigations

From a source in England close to the Cardinal Murphy-O’Connor case, LifeSiteNews learned that the lady around 2009 accused Murphy-O’Connor of involvement in her abuse. She had been, as a young teen in the 1960s, a victim of notorious pedophile priest Michael Hill. She asserted around 2009 that there were several priests involved in her abuse at the time, with Cardinal Murphy-O’Connor being one of them. Cardinal Murphy-O’Connor later infamously transferred the known abuser Hill to be the chaplain at Gatwick airport despite warnings that he would offend again. (He did indeed offend again.) The lady in question is an acknowledged victim of Fr. Hill and was paid at the beginning of the 2000s a £40,000 settlement by the Diocese of Arundel and Brighton for the abuse she suffered.

While the left-leaning Tablet in England has claimed that the woman’s allegations against Murphy-O’Connor were investigated by police and the Church and found lacking in credibility, our source in England provides needed clarification.

Our source notes: “The police did not decide that she was not credible, but that they did not have corroborating evidence.” The source added that, had the police not found the victim a credible source, “they would not have investigated the case.” Rather, the source said, the police took the case so seriously that they interviewed Cardinal Murphy-O’Connor himself “under caution,” which means that they made it clear to him that his answers could be used against him in court. Moreover, the source says the police never closed the case, but put it aside awaiting corroborating evidence.

The Tablet author Christopher Lamb omits in his description of the history of the case that the Archdiocese of Westminster altogether refused to investigate the allegations of the female victim according to Church protocols. As LifeSiteNews has reported, it was not the Archdiocese of Westminster, but two other dioceses – Portsmouth and Northampton – which filed a case directly with the CDF in 2011. As our well-placed source in England has affirmed, it was not Cardinal Vincent Nichols, the Archbishop of Westminster since 2009, who instigated the CDF investigation. Only in 2011 – that is, three years after the lady started to claim Cardinal Murphy-O’Connor abused her – Nichols finally had his diocesan officials meet with her in person. Still, they did not open an investigation.

According to our source in England, Bishop Crispian Hollis (of Portsmouth, now retired) and Bishop Peter Doyle (Northampton) both knew the female victim for years and found her a credible person. “All people involved [i.e., police, as well as the English bishops filing the case with the CDF] found that the female victim is a credible witness,” the English source told LifeSiteNews.

That is the very reason why, in 2013, Peter Doyle – the Bishop of Northampton who originally worked in Portsmouth and who knows the victim personally – together with Portsmouth “complained to Rome” and urged Nichols to restart the CDF investigation in 2013, according to our English source. But once Cardinal Müller finally got the 2013 CDF investigation underway, Pope Francis put a stop to it.

Damian Thompson, editor-in-chief of the Catholic Herald, notes that there were “some English bishops” who were “unhappy at Westminster breaking rules.” Speaking of The Tablet article, he wrote on Twitter September 30: “This report is basically accurate. I believe in ++Cormac’s innocence. But this isn’t the whole story. Some English bishops unhappy at Westminster breaking rules; the CDF intervened. ++Mueller knows the truth.”

“Cardinal Nichols should explain precisely how he handled the Cormac allegations,” Thompson wrote on Twitter September 26. “They may have lacked credibility, but there’s no indication that the Church’s abuse procedures were properly implemented. Far from it.”

On Twitter, The Tablet’s Lamb and Austen Ivereigh, Cardinal Murphy-O’Connor’s former assistant, suggested that The Tablet’s report discredited Archbishop Viganò. Viganò listed in his recent follow-up testimony Pope Francis’ “halting of the investigation of sex abuse allegations against Cardinal Cormac Murphy O’Connor” as one example of the pontiff’s complicity in sex abuse cover-up. The discrediting of Viganò would vindicate Pope Francis, not only with regard to his role in the Murphy-O’Connor case, but in the face of larger cover-up accusations surrounding the ex-Cardinal Theodore McCarrick debacle.

Cardinal Muller’s confirmation that the CDF’s investigation of Murphy-O’Connor was indeed halted would seem to vindicate Viganò, though.

Murphy-O’Connor had been the Bishop of Arundel and Brighton from 1977 until 2000, when he was appointed Archbishop of Westminster. He was also a member of the St. Gallen Group that tried to get Cardinal Jorge Bergoglio (now Pope Francis) elected, first in the 2005 conclave, and then again in 2013.

In his biography of Pope Francis, Ivereigh wrote that days prior to the conclave, which began March 12, 2013 in Rome, Murphy-O’Connor was tasked by the St. Gallen “mafia” to inform Jorge Bergoglio of a plan to get him elected. According to Ivereigh, Murphy-O’Connor was also tasked with lobbying for Bergoglio among his North American counterparts as well as acting as a link to those from Commonwealth countries. Cardinal Murphy-O’Connor recounted in his memoir An English Spring that when Pope Francis met the English cardinal in July 2013, the Pope told him, “You're to blame!”