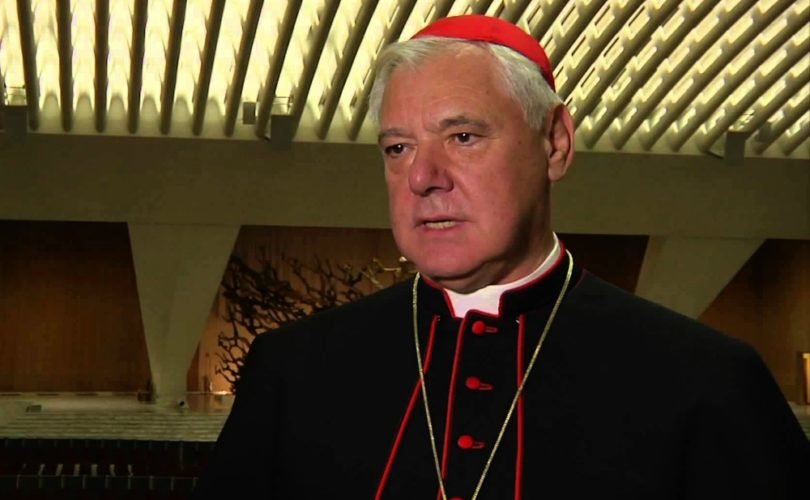 February 28, 2018 (LifeSiteNews) – Cardinal Gerhard Müller is opposing the German bishops’ decision to open Communion to the Protestant spouses of Catholics in some cases.

In a new interview to be published Thursday in the Catholic newspaper Die Tagespost, the former head of the Congregation for the Doctrine of the Faith says the German bishops are misusing canon law to support their decision.

The German bishops' website Katholisch.de issued a report on the interview today.

According to the report, Müller describes the expression “in individual cases” as a “rhetorical trick.”

While the Code of Canon Law (in Canon 844 § 4) allows such intercommunion in cases of “a grave spiritual need,” Müller suggests it is “not right” for the German bishops to invoke that provision of the Code in this circumstance.

The Code of Canon Law is not applicable here, according to Müller, since the canonical exceptions deal with the eternal salvation of souls and with danger of death. A mixed marriage, on the other hand, is not an emergency situation.

The cardinal’s concern is supported by canon lawyer Ed Condon who also opposed the new German intercommunion proposal in a February 23 article in the Catholic Herald.

Condon said that “these [German] guidelines would seem to go well beyond canon law, which puts very definite limits on who can receive Communion and when.” He insists, like Cardinal Müller, that “'Danger of death' or comparable 'grave necessity' …  is only envisaged as a one-off occasion. The German bishops’ intentions appear to go well beyond and provide for some kind of stable arrangement – receiving Communion week after week – which is completely outside what the Church provides for.”

In his new interview, Cardinal Müller insists that in the case that someone shares the Catholic Faith in the Eucharist – as a precondition for receiving Holy Communion – he also has to reject those teachings of non-Catholic communities that are opposed to it. He warns the German bishops not to deal, in their upcoming handout concerning intercommunion, “too loosely” with the theological principles that are involved in this matter. Otherwise, one might have to deal “with other undesired consequences” that could be drawn from this kind of approach. Cardinal Müller welcomes progress in the field of ecumenism as “desirable and necessary,” but insists this cannot lead toward a “protestantization of the Catholic Church.”

Cardinal Müller's resistance against the German push for intercommunion comes in the wake of a statement made by Cardinal Robert Sarah, the Prefect of the Congregation for Divine Worship and the Discipline of the Sacraments. As LifeSiteNews reported, Sarah had written a foreword to a new book about a worthy reception of Holy Communion, in which he states: “Sacrilegious Communions, not received in the state of God’s grace, or not professing the Catholic faith (I refer to certain forms of the so-called “intercommunion”), are also outrages.”

In the Die Tagespost interview, the German cardinal also again criticizes the suggestion raised by German bishops to offer a blessing for homosexual couples. He had previously characterized these blessings as an “atrocity.” It would be a “sacrilegious presumption” to condemn persons with homosexual inclinations, he says now, “but nobody can ask for God's blessing here since homosexual acts are contrary to the Will of God.”

“Pastoral assistance looks differently and can only serve the peace of soul if it remains on the foundation of truth,” he adds.