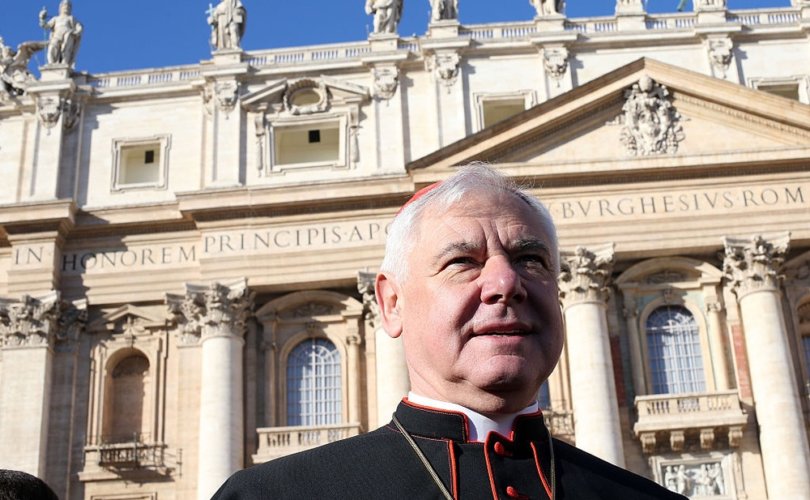 ROME, May 11, 2020 (LifeSiteNews) – German Cardinal Gerhard Müller has defended signing the appeal “for the Church and the world” warning that the COVID-19 pandemic is being used as a “pretext” by world leaders to “control” people and strip them of their fundamental rights, providing a “disturbing prelude to the realization of a world government beyond all control.”

Müller said, “Of course, interested circles within the Church have used this Viganò text in order to use it to make indignant capital against their supposed opponents.”

The appeal was initiated by Archbishop Carlo Maria Viganò, and signed, among others, by Cardinal Joseph Zen, former bishop of Hong Kong, and Cardinal Janis Pujats, former archbishop of Riga, Latvia.

Cardinal Robert Sarah, Prefect of the Congregation for Divine Worship and the Discipline of the Sacraments, withdrew his signature early on. The only prelates from North America to sign the appeal were Bishop Joseph Strickland of Tyler, Texas, and Bishop René Henry Gracida, former head of the diocese of Corpus Christi, Texas.

Müller, the former Prefect of the Congregation for the Doctrine of the Faith, told Catholic newspaper Die Tagespost that at this point, people “call everybody who thinks differently a conspiracy theorist.” One example he mentioned sarcastically was that of “dark conservative forces” who “thwarted the Pope at the Amazon Synod.”

The President of the German Bishops’ Conference, Bishop Georg Bätzing of Limburg, had said that his organization “does in principle not comment on appeals by individual bishops outside Germany.”

Nevertheless, he commented that “the assessment of the coronavirus pandemic by the German Bishops’ Conference is fundamentally different from the appeal published yesterday.”

Bishop Rudolf Voderholzer, who succeeded Müller as bishop of Regensburg, only said he was “adopting as his own” the statement by Bätzing.

Bishop Gebhard Fürst tweeted, “As bishop of the [diocese of Rottenburg-Stuttgart] I strongly dissociate myself from the dangerous theories of the group around Archbishop Viganò. Whoever reinterprets the efforts of politics to protect human life from the [coronavirus] into a dubious world conspiracy is playing with fire!”

Msgr. Klaus Pfeffer, Vicar General of the diocese of Essen, which is headed by liberal Bishop Franz-Josef Overbeck, declared he was “simply stunned by what is being spread in the name of the Church and Christianity.”

He called the appeal by Archbishop Viganò a document of “crude conspiracy theories without facts or proof, coupled with right-wing populist rhetoric that sounds frightening.”

According to Pfeffer, the appeal “must be contradicted!”

“Such confused theses, which stir up fears, pursue black and white thinking, draw evil enemy images, and poison the coexistence in our societies, have nothing to do with Jesus Christ, to whom the signatories refer.”

Pfeffer did not address, cast doubt on, or disprove any of the concerns brought forward by Cardinal Müller and the other signatories.

Müller accused his critics of presenting the appeal as a text that claimed the pandemic was an invention “in order to cause a panic” – an insinuation he called “absurd.”

“Because I, as a cardinal, was somehow seen as the most prominent person of this text, the perception was focused on me,” Müller said.

The cardinal explained he had done nothing more than generally agree with the text as a call for handling carefully the journalistic and political side effects the coronavirus pandemic could have in some non-democratic countries. He said he had not considered the text as a scientific analysis.

At the same time, the fact that he was the only German prelate to sign the document certainly contributed to the attacks in German media, as well.

“It is wrong to always polarize everything,” he continued. “Those who know better can use objective arguments to calmly and serenely correct real or alleged errors. What is important for us is the connection of faith and reason for coping with the consequences in bodily, social and spiritual regard.”