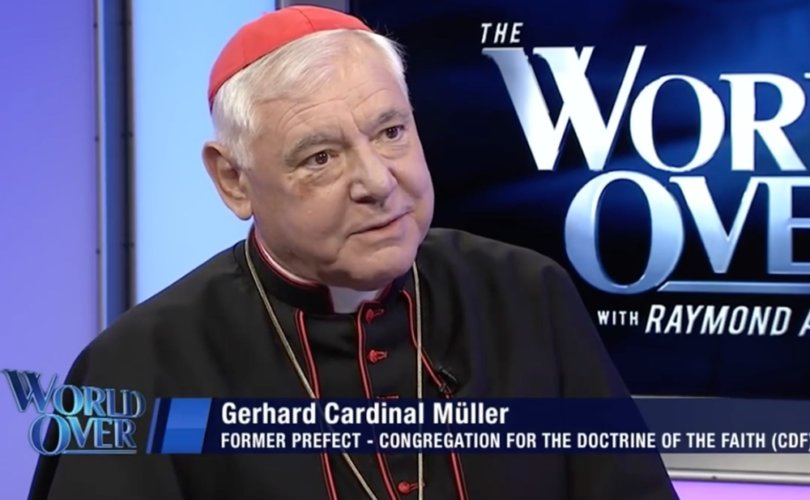 NEW YORK, October 5, 2018 (LifeSiteNews) – The Vatican’s former doctrinal chief told EWTN last night that the abuse crisis was largely caused by an “absolute false politics” within the Church that allowed abusive clergy to remain in active ministry instead of facing the canonical penalties they deserved.

Cardinal Gerhard Müller, 71, formerly the head of the Congregation for the Doctrine of the Faith (CDF) agreed with Raymond Arroyo, host of EWTN’s “The World Over,” when the host stated that a “misplaced idea of mercy, sparing these priests or bishops the penalties they deserve, really is the cause of the abuse crisis.”

“This goes back to the ‘60s and ‘70s,” Müller explained. ‘There was an [attitude that] Jesus preached love and we don’t need laws in the Church.”

“But this is stupid because we are a communion of men,” he continued. “Love comes from God, but we can become sinners or we can do crimes, and therefore the Church needs … this [system] of penalties against its members, especially against the clergy.”

“We must return to the old system,” Müller stated.  “It was better. The old law in the canon law must be reestablished for overcoming this crisis.”

The Cardinal had told Arroyo that, as head of the CDF, whose job it was to adjudicate clerical abuse cases, he was opposed by influential sources in the Vatican in his determination to dismiss abusers from the clerical state.

“I had a relatively good relationship personally to the Holy Father but then they instituted a special college separated from the Congregation, within the Congregation…,” he explained. “They decided against our opinion [and] in many cases to recuse the penalties because some of them have this opinion [that] we cannot laicize a priest. They are absolutely against secularization of a priest.”

This group of ten had agreed that guilty priests should receive a penalty but not dismissal from the clerical state, a punishment Müller believes is absolutely necessary to justice for the priest’s victim or victims.

“We see now the result of this absolute false politics [that] are naive,” he said.

“And I can only repeat my meaning: If abuse is so great…the only solution, and the only justice for the victim, is that the perpetrator must be dismissed from the clerical state,” he said. “If you are a priest, a good shepherd, you cannot ruin the sheep.”

“It is the only escape from this crisis,” he continued.

However, Müller strongly stated that he believes this papal privilege is a mistake and that such investigations should be independent of the pontiff–let alone the influence of his friends.

“There must be an ordinary process… There cannot be obstacles [to] a real process,” he told Arroyo. “In the States, it is not possible that the President of the United States [can] make a call to a tribunal and stop [it]. We need independence of ecclesiastical courts and the canonical process.”

The Cardinal took aim at Pope Francis’s closest advisers, whom he says interfere with investigations and the appointment of bishops.

“The great problem in this pontificate are the so-called ‘friends’ of the Pope who are in reality more his enemies,”  Müller said. “And we, his true friends, are called by some mass media ‘the enemies’ of the Pope. But this thinking in the categories of friendship, of not friendship, is not helpful.”

“We need correct handling of questions of faith and discipline and morals, and not this system of personal relationships all the time,” he continued.

Müller stated that when the C-9, or council of nine cardinals chosen to be Pope Francis’ inner circle, came together, some of them asked for certain candidates to be made bishops, not because the candidates were the most qualified to be “shepherds”, but because of power plays. Thus, they bypassed the Congregation of the Bishops.

“This is the problem,” he concluded.