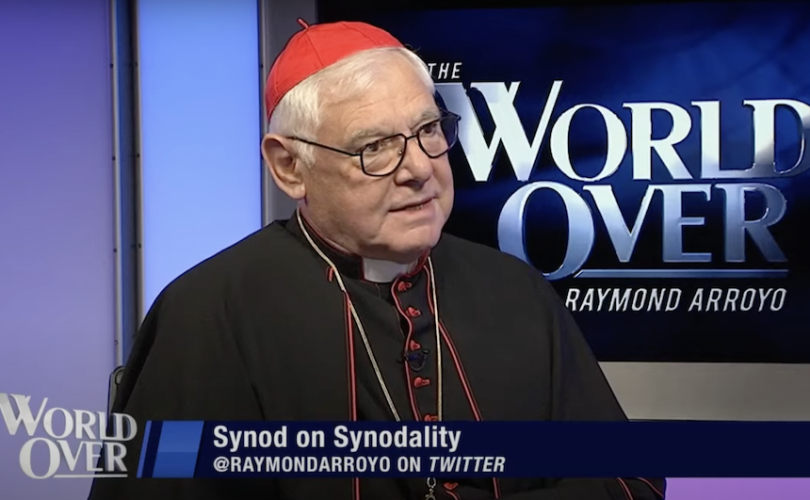 (LifeSiteNews) – Cardinal Gerhard Müller ripped into the Synod on Synodality in some of his strongest comments yet about the direction of the Catholic Church under Pope Francis, describing the synodal process as a “hostile takeover” of the Church that threatens to “end” Catholicism.

In an explosive interview Thursday on EWTN’s The World Over, the former head of the Vatican’s highest doctrinal office condemned heterodox ideas expressed by Synod leadership and in synodal reports and slammed the initiative’s focus on “self-revelation” as opposed to the Catholic faith.

“This is a system of self-revelation and is the occupation of the Catholic Church” and “the hostile takeover of the Church of Jesus Christ, which is a column of the Revealed Truth,” Cardinal Müller told EWTN host Raymond Arroyo. “This has nothing to do with Jesus Christ, with the Triune God, and they think doctrine is only like a program of a political party who can change it according to their voters.”

The Synod on Synodality, launched by Pope Francis in 2021, is a multi-year process that involves gathering opinions of lay Catholics – and even non-Catholics – in every diocese in the world ahead of the Synod of Bishops in Rome next October. Pope Francis has described the goal of the Synod as creating “a different Church,” and top synodal officials have indicated that it could lead to changes in Church doctrine and leadership.

The relator general of the Synod, Cardinal Jean-Claude Hollerich, sparked outrage and accusations of heresy earlier this year for claiming that Catholic teaching on the sinfulness of homosexual acts is “no longer correct” and needs “revision.” National synodal reports from multiple Western countries have also highlighted calls for doctrinal change, including on homosexuality and the ordination of women, and the official Vatican website for the Synod has repeatedly infuriated Catholics by promoting homosexual relationships and dissident activist groups.

Asked whether the Synod on Synodality is shaping up to be “an attempt to destroy the Church,” Cardinal Müller responded starkly, “Yeah, if they will succeed, but that will be the end of the Catholic Church.”

He compared the state of the synodal process with the heresy of Arianism and the “Marxistic form of creating the truth,” insisting that Catholics “must resist” it.

“It’s like the old heresies of Arianism, when Arius thought according to his ideas what God can do and what God cannot do,” the cardinal said. “The human intellect wants to decide what is true and what is wrong.”

Synod leaders are “dreaming of another church [that] has nothing to do with the Catholic faith” and is “absolutely against” it, Cardinal Müller slammed. “They want to abuse this process for shifting the Catholic Church and not only in another direction, but in the destruction of the Catholic Church.”

“Nobody can make an absolute shift and to substitute the revealed doctrine of the Church,” he emphasized, “but they have these strange ideas,” such as that “doctrine is only a theory of some theologian.”

That’s not at all the case, the German prelate stressed:

The doctrine of the Apostles is a reflection and manifestation of the Revelation of the Word of God. We have to listen to the Word of God, but in the authority of the Holy Bible, of the Apostolic Tradition, and of the Magisterium, and all the councils said before that is not possible to substitute the Revelation given once and forever in Jesus Christ by another revelation.

— Article continues below Petition —
Demand that the Archdiocese of Indianapolis let Kim Zember speak!
Show Petition Text
5014 have signed the petition.
Let's get to 6000!
Thank you for signing this petition!
Add your signature:
Show Petition Text

Responding to a recent image published by the Synod’s Facebook account that featured a women priest and LGBT “pride” imagery, Cardinal Müller said, “I think there’s a desire to take over a power which doesn’t exist. They want to be more intelligent than God Himself.”

He also agreed that the Synod on Synodality is an attempt to create an unofficial Third Vatican Council. “It is very astonishing that is allowed under the authority and in this context of the Vatican,” he said, “and that gives the impression that this is really possible, that the Church with the Pope or with this secretary general of the Synod, they are authorized to be the audience of the Holy Spirit. And the Holy Spirit is only a function for them, it’s only instrumentalized.”

“This has nothing to do with the Holy Spirit … who reveals Himself in the Holy Trinity,” Cardinal Müller continued. “This is a way to undermine the Catholic faith and Catholic Church.”

‘How is it possible that Cardinal Grech is more intelligent than Jesus?’

Cardinal Müller reserved some of his most scathing comments for staunchly liberal, pro-LGBT Cardinal Mario Grech, the secretary general of the Synod of Bishops, whose office is responsible for synthesizing synodal reports submitted to the Vatican from around the world.

Grech, who is widely seen as a possible papal candidate, suggested last month that the Synod could usher in radical changes to Catholic teaching on marriage and sexuality and said that “complicated issues” such as giving Communion to the divorced and remarried and “blessing” homosexual relationships “are not to be understood simply in terms of doctrine.”

“What has the Church to fear if these two groups within the faithful are given the opportunity to express their intimate sense of spiritual realities which they experience?” Grech said in a presentation to more than 200 U.S. bishops and other Catholic leaders. “Might this be an opportunity for the church to listen to the Holy Spirit speaking through them also?” he asked.

Cardinal Müller blasted Grech’s comments as “absolutely against Catholic doctrine” and compared them with Protestantism and the heresy of Modernism:

Here is a hermeneutic of the old cultural Protestantism and of Modernism, that the individual experience has the same level as objective Revelation of God. And God is only a wall to you, [onto] which you can project your proper ideas, and to make a certain populism in the Church; and surely everybody outside of the Church who want to destroy the Catholic Church, and the fundaments, they are very glad about these declarations. But it is obvious that is absolutely against the Catholic doctrine. We have Revelation of God in Jesus Christ. And it is definitely closed and finished in Jesus Christ. … This is absolutely clear: that Jesus has spoken about the indissolubility of matrimony.

“How is it possible that Cardinal Grech is more intelligent than Jesus Christ?” asked Cardinal Müller, questioning where Grech gets “his authority to relativize the Word of God.”

He also rebuked Grech’s recent claim that the Synod on Synodality is able “to open up scenarios” not even “imagined” by the Second Vatican Council.

“Everybody knows who studied the first semester of theology that the Church and the authorities of the Church cannot change Revelation,” Cardinal Müller retorted.

He added that Grech, moreover, is not even “a recognized theologian” and “has no importance in academic theology.”

“How he is here presenting a new hermeneutic of the Catholic faith, only because he is a secretary of a Synod which has no authority about the doctrine of the Church?” Cardinal Müller asked.

“All these synods of the bishops and the synodal process have no authority, in no way magisterial authority.”