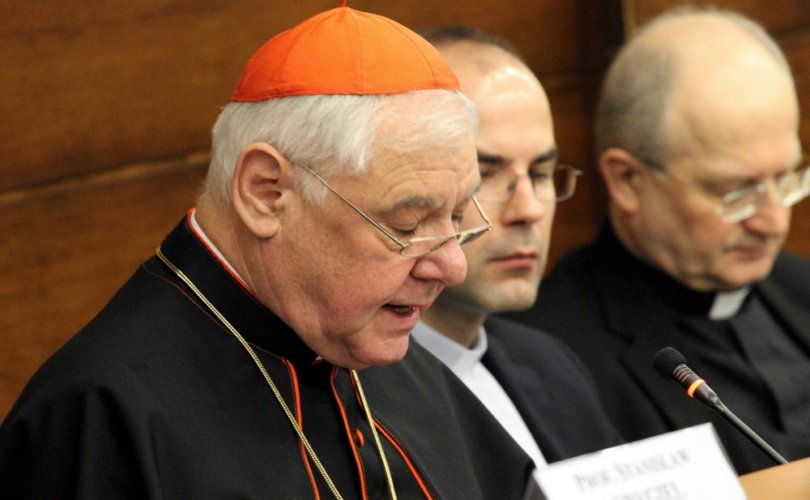 ROME, March 8, 2018 (LifeSiteNews) — The Pope has no power to change or relax the Church’s ban on artificial contraception, just as he can never allow women to be ordained, Cardinal Gerhard Müller said on Wednesday.

The former prefect of the Congregation for the Doctrine for the Faith was speaking at a book launch at the Lateran University in Rome. The launch was hosted by the Pontifical John Paul II Institute and was attended by key Vatican figures.

His remarks on the infallibility of Humanae Vitae’s teaching were supported by comments made at the same event by Professor Livio Melina, who served as president of the John Paul II Institute in Rome from 2006-2016.

Prof. Melina said that while the Church’s ban on contraception has never been dogmatically defined ex cathedra, nonetheless the teaching “belongs to the universal ordinary magisterium,” and as such is infallible.

The new book by Fr. Paweł Stanisław Gałuszka, entitled “Karol Wojtyła and Humanae vitae,” examines the contribution that Karol Wojtyła and the Polish bishops made to the editing and reception of Humanae Vitae when Wojtyła was Archbishop of Krakow. The book contains several never-before-published documents, including a letter that Wojtyła sent to Pope Paul VI in 1969, after numerous episcopates had spoken out critically of Humanae Vitae.

In the letter to Pope Montini, Wojtyła suggests that the Holy See “contemplate a series of provisions aimed at helping priests and laity” to resolve difficulties arising from “harmful” interpretations of the papal document.

To this end, Wojtyła includes with the letter several detailed proposals for an “instruction addressed to priests engaged in the ministry — above all confessors, catechists and to preachers.”

In the lead up to Wednesday’s book launch, news reports circulated in Rome about the contents of the letter.

Avvenire’s editor-in-chief, Luciano Moia — a clear dissenter from Humanae vitae — said the “tone” of Wojtyła’s proposed guidelines represented a “substantial stiffening” [irrigidimento] with regard to what Paul VI wrote in Humanae vitae. He added that the guidelines were “explicitly” at odds with the thoughts expressed by “half the world’s bishops” at the time, which were characterized by “respect, welcoming and understanding.”

Moia said the “most surprising aspect of the letter” was that Wojtyła asked Paul VI to proclaim the “infallible and irreformable” character of the encyclical, even though Moia ignores the fact that the word “irreformabile” never appears in the letter.

“Is it possible that Wojtyła was unaware that Paul VI required Msgr. Ferdinando Lambruschini … to explain at the press conference presenting the encyclical that the text should not be considered either as infallible or irreformable?” Moia asked.

Moia has openly supported a relaxing of the Church’s ban on artificial contraception. Readers may also recall that Avvenire  — the official newspaper of the Italian bishops — prominently featured and praised Fr. Maurizio Chiodi’s controversial public lecture in which he said that responsible parenthood can obligate married couples to use artificial contraception.

During the question and answer session at the book launch, the panel was asked about the claims made in the Avvenire article. One gentleman asked: “If it’s true that Karol Wojtyla asked Pope Paul VI to declare Humanae vitae infallible, and Pope Paul VI did not grant his request, why didn’t he do it himself during his own 27-year pontificate?”

Prof. Melina welcomed the opportunity to clarify the matter, saying:

I think that all of this is what, today, is fashionably called “Fake News.” You just have to carefully and critically read the letter that the Archbishop of Krakow wrote to Paul VI in 1969 to realize that, in fact, he didn’t make this request.

And since the Archbishop of Krakow thinks, on the basis of what Humanae vitae itself states, that the moral teaching of the Church is not an arbitrary decision, that the Magisterium is not an exercise of power but is a service to the truth, the Archbishop of Krakow is convinced that the teaching of Humanae vitae expresses a truth about the good, which the Church does not have the right, does not have the presumption to define or to change, but of which she is simply the depository and witness.

In this sense, the letter of 1969 simply invites Pope Paul VI to reconfirm what the encyclical Humanae vitae says, that is, that the teaching belongs to the universal ordinary magisterium, which according to the teaching of the Second Vatican Council in Lumen Gentium, 25, is infallible. Therefore, not the definition ex cathedra of a new dogmatic truth according to the teaching of Vatican I, but rather the acknowledgment of the truth as ordinary universal magisterium of what is written in Humane vitae itself.

Furthermore, St. John Paul II, on various occasions, particularly in his address in June 1987, acknowledged that, after Humanae Vitae, the interventions of the bishops, the interventions at the Synod in 1980 and Familiaris Consortio, as well as the interventions of his own magisterium, had rendered that doctrine no longer — these are the precise words — an “object of possible theological discussion,” which is the formula according to which once can say that it belongs to the ordinary universal magisterium. Of course, this is not a definition ex cathedra but it is, we might say, an assessment that theologians can responsibly make regarding the theological note of this teaching.

“Materially it is infallible, because it belongs to Christian anthropology and revealed anthropology and natural anthropology,” Müller said. “God is the Creator and the parents are the servants of divine providence, which includes the existence of men,” he added.

“We have the same issue in Ordinatio Sacerdotalis, regarding the impossibility of the Church to administer the sacrament of ordination to a woman,” the former CDF prefect continued. “It’s clear… the Pope doesn’t have the power to change this doctrine.”

No one can change it

Also featured on the panel was Professor Stanisław Grygiel, a Polish layman who holds the Karol Wojtyła chair in philosophical anthropology at the JP II Institute in Rome. Prof. Grygiel was a close personal friend of Pope John Paul II and responded by recounting two events from his life and friendship with Wojtyła.

In the 1980s, on an evening when I was speaking to St. John Paul II, he showed me a letter written and addressed to him by a very well known moral theologian in Europe. In this letter, the theologian asked the Pope to change the moral teaching regarding sexual life in marriage, Humane vitae, because “we are losing the faithful.” It’s too difficult so we need to change  — not because its false, no — because it’s too difficult. The Pope gave me this letter, and asked me what I thought. I read it immediately and a little imprudently a word popped out of my mouth. I said: “This letter is stupid.” And the Pope looked at me and said: “Yes, it’s true. But who will tell him.”

There was a priest who was telling him that people are leaving because it’s too difficult; they need condoms; they need the pill. What do we do? After a little pause of silence, the Pope said: “Dear Fr. [X], tell me, did I and Paul VI invent the doctrine contained in Humanae Vitae? I cannot change it. No one can change it. No one. Not even the Church, my dear priest. Think about this.”

“The priest didn’t respond. He bowed his head and the conversation ended. I think these two events give us something to think about,” Grygiel said.

Wednesday’s book launch was received by a packed hall. Among the attendees were key Vatican figures such as German Cardinal Walter Brandmüller, the Theologian of the Pontifical Household, Polish Dominican Wojciech Giertych, and former vice-president of the Pontifical Academy for Life, Bishop Jean Laffitte.