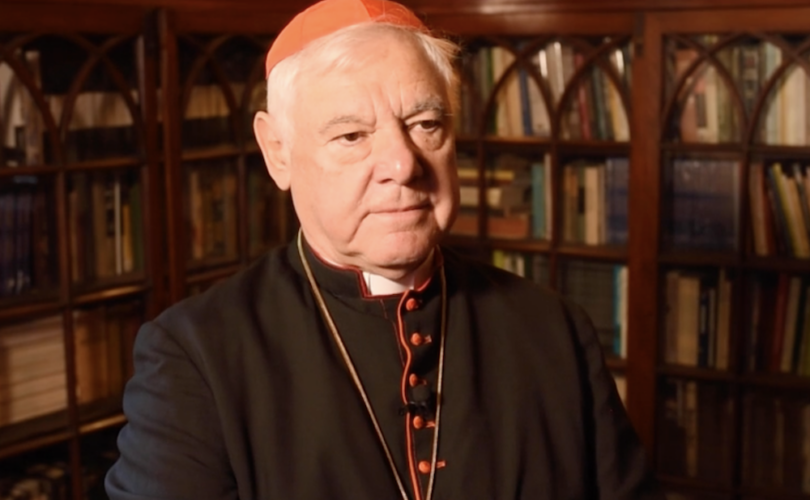 (LifeSiteNews) – Cardinal Gerhard Müller doubled down on his scathing criticism of dissident bishops in an interview with LifeSiteNews this week, accusing Belgian bishops of “heresy and schism” for approving “blessings” of homosexual unions.

Cardinal Müller, the prefect emeritus of the Congregation for the Doctrine of the Faith, told LifeSite senior correspondent Jim Hale that the introduction of same-sex “blessings” by the bishops of Belgium’s Flanders region is “nothing more than heresy.”

“It’s nothing more than heresy against Christian marriage,” he said. “It’s an absolute heresy and schism.”

“No bishop or pope has authority to bless something which is against the will of our Creator and our Redeemer,” the former Vatican doctrinal chief added.

Cardinal Müller noted that it has “often” happened in the Church’s history that some bishops have veered from the faith and become “heretics and schismatics.”

“And this is happening now,” he said.

He insisted that the Vatican should swiftly correct the Belgium bishops and without too much “diplomacy.” “Rome must speak,” Cardinal Müller declared. “Now is the time to cry out the truth from the [rooftops].”

The German prelate lamented, however, that “there’s no discipline” for heretical bishops today. “Normally, this would be the task of the Congregation for the Doctrine of the Faith,” he explained, “to correct these wrong teachings, which are against Revelation not only as a logical doctrine but the revealed doctrine of the Church, the depositum fidei.”

“We must be faithful to the doctrine of the Apostles, because Revelation is the Word of God, not only our speculations and our ideas,” he said.

The current head of the Congregation for the Doctrine of the Faith, Cardinal Luis Ladaria Ferrer, S.J., has been loathe to correct dissidence, and at least one Belgian bishop, Johan Bonny of Antwerp, has claimed that Pope Francis supports the Flemish guidelines on homosexual “blessings.”

But Cardinal Müller repeatedly emphasized that bishops have no authority to contradict the Catholic faith and said that substituting doctrine with erroneous opinions is an “abuse” of the “spiritual power” entrusted to them by Christ.

“The Holy Father has this obligation and this duty to put in good bishops with intellectual and spiritual competence who are faithful to the doctrine of God, because bishops are the successors of the Apostles. They are not masters, the bosses of our faith, but they are only ministers of Revelation,” Cardinal Müller said.

Using a phrase he recently employed to describe Pope Francis’ Synod on Synodality, Cardinal Müller blasted the rising influence of LGBT ideology in the hierarchy as a “hostile overtaking of the Church,” citing also the German Synodal Path.

Though the LGBT agenda has enthralled many bishops in the West, there’s “no possible compromise” that the Catholic Church make with it, he stressed.

“We cannot make a compromise with LGBT lunacy. There’s no possible compromise,” Cardinal Müller said. “That’s absolutely wrong and absolutely false and absolutely dangerous for the people.” He further slammed the LGBT movement for “criminal ideas,” like the “castration of boys” because of gender confusion, which he called “abuse of young children.”

Cardinal Müller’s remarks are his latest in a series of blistering condemnations of homosexual ideology and creeping heresy within the Catholic Church.

In his viral criticism of the Synod on Synodality earlier this month, the cardinal warned that Synod leaders are seeking the “destruction” of the Church and that the synodal process, if successful, would “end” Catholicism. He excoriated pro-LGBT celebrity priest Fr. James Martin, S.J., in a June interview with LifeSite editor-in-chief John-Henry Westen, calling Martin’s activism “absolutely heresy.” In February, he ripped the German bishops’ LGBT agenda as “totally idiotic.”

Cardinals Willem Eijk and Francis Arinze both rebuked the Flemings bishops for their homosexual “blessings,” and Archbishop Carlo Maria Viganò condemned them last month as “heretics who abuse their power and authority as pastors.”

In a recent essay for the National Catholic Register, Cardinal George Pell renewed his criticism of the Synodal Path and linked it to “serious heresies.” The Australian prelate had helped organize a “fraternal correction letter” earlier this year signed by more than 100 bishops warning that the German initiative risks “schism.”

He previously urged the Vatican to censure the president of the German bishops’ conference, Bishop Georg Batzing, and Cardinal Jean-Claude Hollerich, the relator general of the Synod on Synodality, for their heterodox stances on sexual morality. Cardinal Müller backed the move. After Hollerich claimed in January that Catholic doctrine on the sinfulness of sodomy is “no longer correct,” Cardinal Pell accused him of “explicit heresy.”

The Catechism of the Catholic Church states that Sacred Tradition “has always declared that ‘homosexual acts are intrinsically disordered,’” in line with Scripture, which “presents homosexual acts as acts of grave depravity.”

“They are contrary to the natural law” and “do not proceed from a genuine affective and sexual complementarity. Under no circumstances can they be approved,” the Catechism adds. It also reiterates Catholic teaching that the homosexual inclination “is objectively disordered.”

The Congregation for the Doctrine of the Faith declared in March 2021 that the Catholic Church does not have “power to give the blessing to unions of persons of the same sex.”

In his June interview with Westen, Cardinal Müller affirmed that “nobody,” including the pope, “can change the doctrine of our Catholic faith that homosexual behavior is a grave sin.”