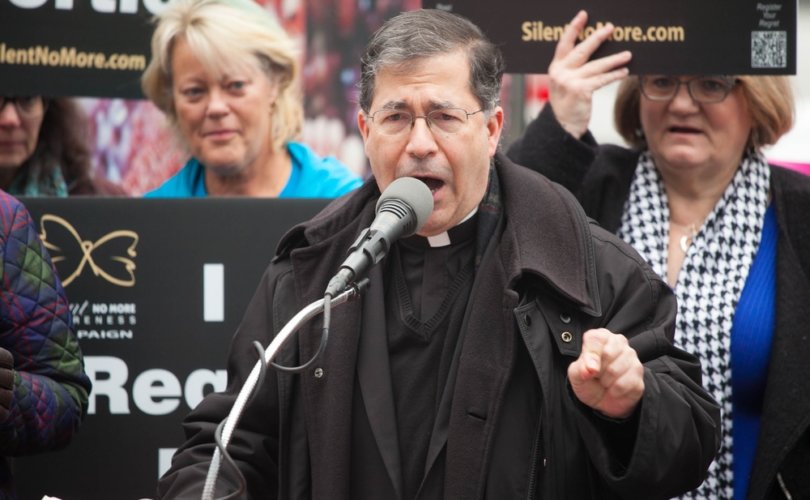 Cardinal Müller, the former head of the Congregation for the Doctrine of the Faith, the top Vatican doctrinal office, called Fr. Pavone’s dismissal unjustifiable and “only political.”

Laicization is a penalty reserved for the most serious cases, such as apostasy, heresy, or “absolutely contradictory behavior against the priesthood,” the German cardinal told LifeSiteNews editor-in-chief John-Henry Westen.

He insisted that the Vatican’s reasons for defrocking Fr. Pavone “are not justified.”

“Nobody with a certain theological understanding or a human feeling of justice and human rights can understand it and accept it,” he said.

Cardinal Müller further alluded that political pressure may have had an impact on Fr. Pavone’s treatment.

“I think there was truly a lot of pressure [from] the Democratic Party” and abortion activists against the pro-life priest and one-time campaign adviser of former President Donald Trump.

“There are other prominent persons in the United States and other countries who are denying openly the basics of the Catholic faith and morals, and they [face] no reactions from the side of the ecclesiastical authority,” he said.

— Article continues below Petition —
Tell Pope Francis that Fr. Frank Pavone's laicization must be overturned
Show Petition Text
46118 have signed the petition.
Let's get to 50000!
Thank you for signing this petition!
Add your signature:
Show Petition Text

Last month, Archbishop Carlo Maria Viganò similarly denounced Fr. Pavone’s laicization as “unjust and illegitimate punishment” and an attempt “to feed a climate of terror among the clergy so as to constrain them into servile and fearful obedience.”

Sister Deirdre Byrne of the Little Workers of the Sacred Hearts in Washington, D.C., also condemned the move as a “travesty” and lamented that U.S. bishops and the Vatican have given “no real guidance” about the scandalous political positions of Joe Biden, “the most pro-death, anti-nuclear family president in our nation’s history, who professes to be a Catholic in good standing.”

The Vatican decree announcing Fr. Pavone’s laicization accused him of “blasphemous communications on social media” and “persistent disobedience of the lawful instructions of his diocesan bishop,” which he has refuted.

The blasphemy charge apparently pertains to Fr. Pavone using the Lord’s name in vain in a Twitter argument with a pro-abortion activist, which he had already publicly apologized for and confessed in the Sacrament of Reconciliation.

The allegation of disobedience reportedly refers to his refusal to withdraw from full-time pro-life ministry and accept a parish assignment at the insistence of his local bishop, Patrick Zurek of Amarillo, Texas.

In a recent interview with Catholic News Agency, canonist and EWTN contributor Fr. Gerald Murray noted that laicization is not listed in the Code of Canon Law as a penalty for blasphemy or disobedience.

Bishop Zurek, who has publicly clashed with Fr. Pavone for years, was one of more than 60 bishop who signed a letter in 2021 urging the U.S. bishops’ conference to halt discussions about denying Holy Communion to politicians who promote abortion.

Zurek petitioned the Vatican to laicize Fr. Pavone, according to The Pillar. The final decision ultimately came from Pope Francis.

A former episcopal vicar of the Diocese of Amarillo testified in 2016 that Zurek had a “personal animus” against the pro-life priest and “seriously misrepresented the actual situation” on multiple occasions.