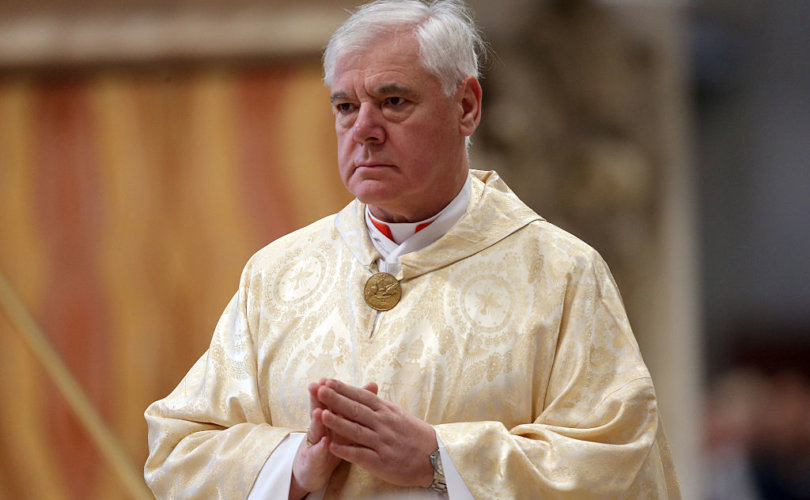 VATICAN CITY, October 11, 2019 (LifeSiteNews) ― A German cardinal asserted in a recent interview that not even the pope nor “a majority of bishops” can change dogmas of the faith or divine law to suit their own preferences.

When asked about the Synod’s discussion of the possibility of opening the priesthood to “viri probati”, elderly married men of proven faithfulness, the former prefect of the Congregation of the Doctrine of the Faith (CDF) said it was a “mistake.”

“There are already married deacons,” Müller stated. “If we introduce [married priests], they must respect the custom of the ancient church: they must live in continence.”

The cardinal explained that even in the Orthodox Church, which has a married priesthood, married priests must refrain from marital relations in the days that precede the celebration of Mass.

“Do you not know about the Trullan Synod of 692?” he asked his interviewer.

“There, thanks to pressure from the emperor, the law of celibacy was dissolved, but only the Orthodox Church adhered to that. Not the Latin one,” Müller continued.

“…Whoever wants to insert the practice of married priests into the Latin Church does not know Her history.”

Priestly celibacy, he explained, is more than just an “ecclesiastical law.” It has “deep roots” in the sacrament of orders, for the priest is the “representative of Christ the bridegroom.” The celibate priesthood has a lived spirituality that cannot be changed.

The permission Benedict XVI granted to married Anglican priests who converted to Catholicism to stay married upon receiving Catholic orders is, Müller said, “an exception.”

“The apostles left everything to follow Jesus,” he noted. “Christ is the model for the ministers, the priests. And this cannot be changed by secular pressure.”

Doing away with the law of celibacy would, he said, even contradict the Second Vatican Council.

“Presbyterorum Ordonis, number 16, speaks of the bond of fittingness between he who represents Christ the celibate husband and the Church.”

Müller rejected the idea that an end to celibacy would cut down on the number of sex abuses.

“It comes from a false anthropology,” he said. “An abusive act contradicts chastity.  Abuse happens everywhere, not only in the priesthood. And we must not forget that 80% of the victims aren’t children but teen boys. That means that many abuses are committed by people who don’t want to respect the Sixth Commandment.”

“Nobody can be admitted to the priesthood if he doesn’t agree to live according to the commandments of God and the exhortations of Christ.”

Müller also discouraged the idea that conservatives desire a schism in the Church, saying that a schism is against Christ’s will, as well as a betrayal of his words and of the teaching of the apostles.

“No pope, nor a majority of the bishops, can change the dogma of the faith or divine laws according to their own wishes,” he said.

“The tradition of the Church is not a toy one can shape at will.”

The cardinal also rejected the libel that he is an enemy of Pope Francis, saying that the true adversaries of the pontificate are those who deny that the papacy is a divine institution, and who want to change revealed doctrine without taking into consideration both Vatican Councils.

“Whoever says these things does great damage to the credibility of the Catholic Church.”

As for women’s ordination, Müller said he couldn’t talk about it because it is “dogmatically impossible” to arrive at the concept.

A final question, touching on the John Paul II Institute, led the cardinal to say it was a “great mistake” to “destroy” the Institute, and that it was an attack on the intellectual quality of Catholic theology.

“Everyone in the academic world is speechless,” he said. “It is unthinkable to fire lecturers for their truly orthodox thought. Among other things, their thought doesn’t betray doctrine, so one cannot understand why they were sent away.”