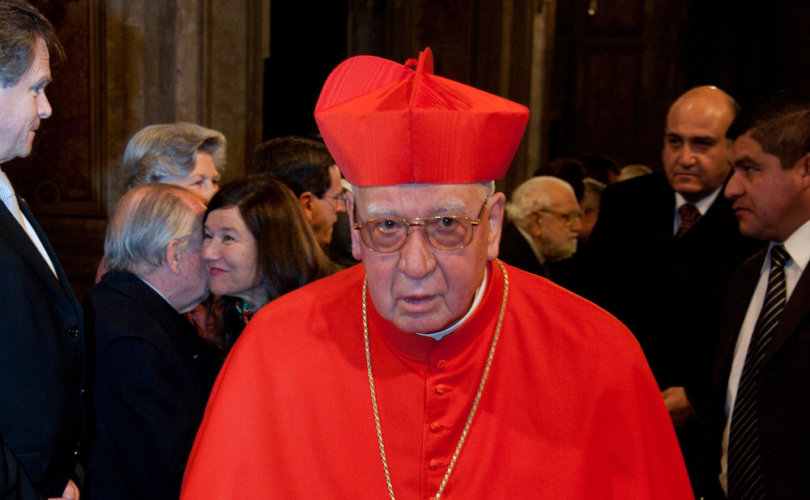 CHILE, August 17, 2017 (LifeSiteNews) — A retired cardinal has told Catholic politicians who voted to legalize abortion in Chile that they cannot receive the sacraments until they show public signs of repentance.

Canon 915 of the Church’s Code of Canon Law states that persons “obstinately persevering in manifest grave sin are not to be admitted to holy communion.”

In his letter, Medina describes Chile’s decision to decriminalize abortion as an “atrocity.” Previously, the two-thirds Catholic country had some of the most pro-life laws in the world. With the bill’s passage, women will be allowed to have an abortion if their health is believed to be in peril, if they were raped, and, as the law states, “when the fetus is unviable.”

Cardinal Medina noted that the use of the term ‘decriminalization’ by pro-abortionists is in reality a euphemism that hides the “atrocious reality of legalized murder of an innocent [baby].”

He added that politicians who supported the law are accomplices to that atrocity and “should not receive the vote of any Christian.” Only when the politician publicly expresses regret before the next election could a Christian think of voting for them again.

Citing Canon Law, Medina, who in 2004 published a book defending marriage, pointed out that Catholic politicians who voted for the bill committed a grave sin. Therefore, they are “not able to receive the sacraments of the Church, unless they have repented and have expressed also publicly their repentance.”

If these politicians die without having shown clear signs of repentance, he added, they will not be granted a Catholic funeral. Public repentance is “indispensable for their eternal salvation.”

Cardinal Medina’s charitable admonition was swiftly denounced by left-wing priests. Fr. Felipe Berrios, a Jesuit known for his social activism, decried the letter as “heartless” and an example of “pastoral terrorism,” InfoVaticano reported.

“The Congress takes [an] oath to vote their conscience and we must respect that conscience. It is sacred,” Berrio argued.

Fr. Percival Cowley, the former chaplain of Chile’s Presidential Palace, echoed Fr. Berrios' position. In a response to Cardinal Medina on the pages of El Mercurio, Cowley said, “We must say no to the right to freely have an abortion, but at the same time learn to trust in the mature consciences of our brethren.”

Cowley then suggested the Cardinal should focus his attention on the negative effects of unjust wages and unfair labor practices.

It is widely understood that outgoing socialist President Michelle Bachelet is using her remaining months in office to ram through the pro-abortion bill. According to The New York Times, her time in office has been dogged by political scandals and corruption charges.

The only obstacle that stands in the way of the legislation becoming official law is the Chilean Constitutional Tribunal, which will decide in the coming days whether the bill is constitutional.

Jonathan Abbamonte, a research analyst with the Population Research Institute, remarked in 2016 that the new law would set “a dangerous precedent for restricting the religious freedom and conscience rights of healthcare workers,” as it essentially “makes all surgeons into abortionists.” It also “lacks any mechanism for verifying the claim of rape.”

Despite her pro-abortion views, Bachelet is scheduled to speak at the Vatican in November.

She, alongside population control advocate Jeffrey Sachs, California Governor Jerry Brown, as well as other radical environmentalists, will be talking at the “Health of People and Planet” conference hosted by the notoriously progressive Pontifical Academy of Social Sciences. Vatican Secretary of State Cardinal Pietro Parolin will deliver the opening address at the three-day meeting.

Before her election in 2014, Bachelet served as the first executive director of UN Women, an agency founded in 2011 that seeks to impose abortion across the globe. The organization also goes by the name The United Nations Entity for Gender Equality and the Empowerment of Women.

In 2006, during her first tenure as president of Chile, she tried to force taxpayers to pay for the morning-after pill. The law was overturned two years later by the Chilean Constitutional Tribunal.

Bachelet has at various times in the past described herself as an atheist and as an agnostic.